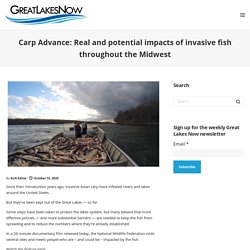 But they’ve been kept out of the Great Lakes — so far. Some steps have been taken to protect the lakes system, but many believe that more effective policies — and more substantial barriers — are needed to keep the fish from spreading and to reduce the numbers where they’re already established. In a 20-minute documentary film released today, the National Wildlife Federation visits several sites and meets people who are – and could be – impacted by the fish. Watch the feature here: Science of The Total Environment Volume 735, 15 September 2020, Evaluating the potential role of bioactive chemicals on the distribution of invasive Asian carp upstream and downstream from river mile 278 in the Illinois waterway. PENNSTATE EXTENSION 15/02/17 Focus on Aquatic Invasive Species – What are Asian Carp?

Asian carp are voracious filter feeders that were imported in the 1970s to filter pond water in Arkansas fish farms. 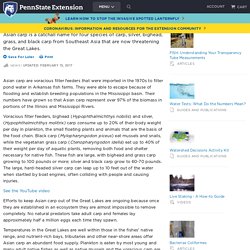 They were able to escape because of flooding and establish breeding populations in the Mississippi basin. Their numbers have grown so that Asian carp represent over 97% of the biomass in portions of the Illinois and Mississippi Rivers. Voracious filter feeders, bighead (Hypophthalmichthys nobilis) and silver, (Hypophthalmichthys molitrix) carp consume up to 20% of their body weight per day in plankton, the small floating plants and animals that are the basis of the food chain. Black carp (Mylopharyngodon piceus) eat mussels and snails, while the vegetarian grass carp (Ctenopharyngodon idella) eat up to 40% of their weight per day of aquatic plants, removing both food and shelter necessary for native fish. These fish are large, with bighead and grass carp growing to 100 pounds or more; silver and black carp grow to 60-70 pounds.

See the YouTube video. INTERNATIONAL JOINT COMMISSION 08/09/20 Tracking the Spawning Grounds of Invasive Grass Carp. The vast majority of grass carp in the Great Lakes basin are reproducing in Ohio’s Maumee and Sandusky rivers, a recent study has found. 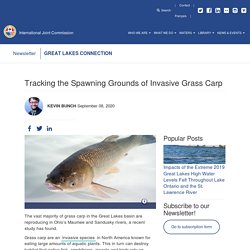 Grass carp are an invasive species in North America known for eating large amounts of aquatic plants. This in turn can destroy habitat that native fish, amphibians, insects and birds rely on. The sterile “triploid” carp have been imported and used in aquaculture and to clean ponds since the 1960s but have escaped into all the Great Lakes but Lake Superior, as well as other waterways. Further, in a 2013 research article, scientists discovered evidence (and confirmed two years later) that some of the fish in Lake Erie were fertile and reproducing in the Sandusky River. PEERJ 14/09/17 Hydrology controls recruitment of two invasive cyprinids: bigheaded carp reproduction in a navigable large river. Introduction Silver carp Hypophthalmichthys molitrix and bighead carp H. nobilis (hereafter bigheaded carp) have substantially expanded their range throughout the Mississippi River basin since their unintentional introduction in the 1970s (Kolar et al., 2005; Irons et al., 2009; Cooke, 2016). 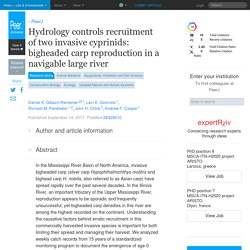 They are currently documented in 23 of the 31 states comprising the Mississippi River basin, including the Arkansas, Missouri, and Ohio rivers (Baerwaldt & Irons, 2013). Throughout their current range, their population densities vary widely from an observation of a single individual (Klumb, 2007) to an estimated 2,544 individuals per river km or 5.5 metric tons per river km (Sass et al., 2010). Differences in population density may be largely an artifact of distance from original source populations or time since arrival. MINNESOTA STATE UNIVERSITY - 2018 - Thèse en ligne : Predicting Invasive Carp Habitat Suitability in the Minnesota River, Minnesota. Abstract Since the 1980's invasive carp have been expanding their range northward up the Mississippi River. 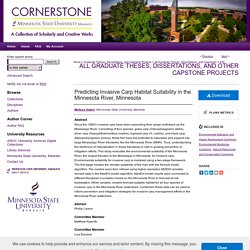 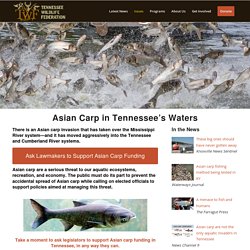 Introduced by flooding of aquaculture facilities in Arkansas, Asian carp have expanded their range throughout the Mississippi River basin into the Tennessee and Cumberland River systems. The species rapidly spreads on its own and can be inadvertently spread by anglers mistaking them for bait fish. Asian carp reproduce quickly, have no natural predators, devour food sources native fish need, and devastate habitats. Asian carp, which can grow up to 100 pounds, also threaten boaters’ safety. If left unaddressed, Asian carp will continue to spread throughout our waterways.

And as anglers stop buying licenses, the state wildlife agency loses critical funding for wildlife conservation of all types. But a greater response is needed from all sectors to meet this challenge. SIU_EDU 01/12/20 Grass carp’s ear bones reveal clues to controlling the invasive fish. SIU Professor of Zoology Gregory Whitledge stands at the university’s Center for Fisheries, Aquaculture, and Aquatic Sciences. 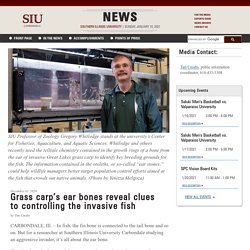 Whitledge and others recently used the telltale chemistry contained in the growth rings of a bone from the ear of invasive Great Lakes grass carp to identify key breeding grounds for the fish. The information contained in the otoliths, or so-called “ear stones,” could help wildlife managers better target population control efforts aimed at the fish that crowds out native animals. (Photo by Yenitza Melgoza) December 01, 2020 by Tim Crosby CARBONDALE, Ill. – In fish, the fin bone is connected to the tail bone and so on. 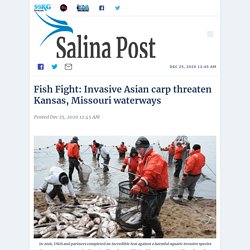 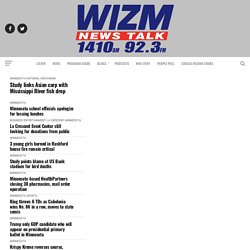 (AP) — Sport fish have declined significantly in portions of the Upper Mississippi River infested with Asian carp, adding evidence to fears about the invader’s threat to native species, according to a new study. Analysis of nearly 20 years of population data suggests the carp are out-competing fish prized by anglers, such as yellow perch, bluegill, and black and white crappie, the report said. Scientists have long suspected Asian carp of starving out other fish in the Mississippi and many of its tributaries. The peer-reviewed study this month in the journal Biological Invasions is among the first to establish a solid link, lead author John Chick said in an interview Friday. “The alarms have been out there for a long time now,” said Chick, a fisheries biologist who directs a University of Illinois field station in Alton, Illinois.

UNITED STATES COAST GUARD - 2017 Asian Carp Monitoring and Response Plan. NATURE 22/02/18 Doubts raised over Australia’s plan to release herpes to wipe out carp - Warm water may render the virus ineffective against the invasive fish, say researchers. An Australian plan to kill invasive carp by releasing a virus into waterways has come under fire from researchers who argue that the tactic will not eradicate enough fish. 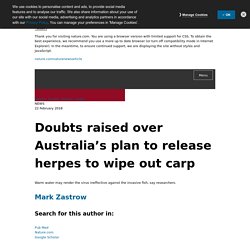 Australia has fought for decades to control populations of the common carp (Cyprinus carpio), and in 2016 the government invested Aus$15 million (US$11.7 million) in a plan to investigate the virus approach. The proposal is to infect carp with a strain of herpes called CyHV-3, which has caused mass fish deaths in the United States and Japan. Many researchers have previously warned of possible far-reaching consequences of the plan, including rivers clogged with decaying fish corpses and further disruption to native ecosystems.

Now, six researchers argue in a letter published in Science1 on 22 February that the virus is unlikely to be effective. They contend that more data — including some from field trials — are needed before a wide-scale release of the virus. MNDAILY 10/09/17 U researchers look to harness fish virus in fight against invasive carp. University of Minnesota researchers see a recent fish virus outbreak as a chance to combat an invasive species plaguing state lakes. Researchers at the University’s Minnesota Aquatic Invasive Species Research Center (MAISRC) in St. Paul have been studying the usage of Koi herpesvirus (KHV) — responsible for recent carp deaths in Minnesota lakes — for potential bio-control of invasive carp.

Koi fish are a subspecies of common carp, making them both susceptible to the virus. “We want to find ways to kill carp and zebra mussels and all these invasive species,” said MAISRC Director Nick Phelps. “We started this particular project in 2014 — went two years and didn’t see [the virus] anywhere, then saw it in seven to eight lakes in a matter of a month and a half.” MAISRC first confirmed a naturally-occurring case of KHV in Elysian Lake in early August. “We initially ran a lot of tests and they all came back negative,” said Meg Thompson, a first-year Ph.D. student at MAISRC. ILLINOIS PRAIRIE RESEARCH INSTITUTE 15/08/17 Turning the tables: Application of commercial fishing helps fight the spread of Asian carp. Rivers help define Illinois both on our maps and in our minds. After decades of decline driven by pollution, the major rivers of Illinois—the Wabash, Ohio, Mississippi, and Illinois—started to improve after the Clean Water Act was enacted in 1972.

Unfortunately, chemical pollution may be relatively controlled, but biological pollution, most recently with the arrival of Asian carp, has been skyrocketing. MICHIGAN STATE UNIVERSITY 03/11/17 Sea Grant report on Asian carp includes educational resources. Great Lakes conservation groups will find a wealth of resources in this new publication. Posted on November 3, 2017 by Dan O'Keefe, MIchigan State University Extension, Michigan Sea Grant. CBC_CA 04/01/18 200K Christmas trees used to fight invasive carp — and the RBG needs more. The gatekeepers of vital Hamilton waterways are coming from living rooms across the city, where they were once covered in ornaments and tinsel. For almost 20 years, the Royal Botanical Gardens has been using donated Christmas trees to form natural barriers at the mouth of Grindstone Creek and Cootes Paradise.

It's all to keep out the non-native common carp, an invasive species that destroys natural habitats and creek beds in the area. The barriers also prevent sewage and sediment from seeping into Cootes. This year — largely thanks to high water levels that plagued the city through most of 2017 — the RBG is searching for 3,200 donated trees to help rebuild its cache and keep creek beds safe. "It's quite a thing when you think about it – they all used to be in a location as Christmas trees," said Tys Theijsmeijer, the head of natural areas with the RBG.

The barrier is also used to keep sediment and sewage out of Cootes Paradise. But why Christmas trees? KANSAS CITY STAR 12/03/18 Herding fish: 47,000 invasive Asian carp removed from Missouri lake. Ever tried herding fish? Conservationists successfully used an experimental method to drive reviled Asian carp to one end of a Missouri lake so 47,000 of them, of about 119 tons, could be removed.

That's a lot of fish. But the invasive species was crowding out sport fish like crappie in Creve Cour Lake near St. Louis. They were even leaping out of the water and striking people. SCIENCE 23/02/18 Biocontrol of invasive carp: Risks abound. MICHIGAN RADIO 10/08/17 Why did the Asian carp cross the electric barrier? This scientist is on the case.

Appetite Volume 65, 1 June 2013, Human consumption as an invasive species management strategy. A preliminary assessment of the marketing potential of invasive Asian carp in the US. Abstract. DNR_STATE_MN_US 15/12/14 Draft : Minnesota invasive carp action plan. TOLEDO BLADE 26/02/17 Invasive Asian carp continue push toward the Great Lakes. Share Tweet Email Print. PHYS_ORG 05/03/17 Michigan to offer prize in fight against invasive Asian carp. Faced with the threat that Asian carp could enter the Great Lakes, Michigan is turning to the public for new ideas and plans to offer a prize to whoever comes up with a way to stop the voracious fish. Michigan's global search challenge comes after the U.S. government and others have spent hundreds of millions searching for a solution to stop the carp from entering the world's largest freshwater system.