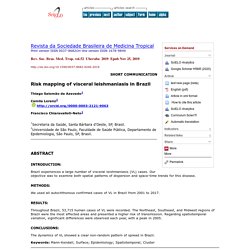 Brazil encounters a large number of human VL cases, which are gradually spreading across all states1. Despite being historically known as a rural endemic disease, VL has reached epidemic proportions in many large Brazilian cities in the past decades2. This currently presents a serious public health challenge. The primary etiological agent of VL in the Americas is the protozoan Leishmania infantum, whose main urban reservoir is the domestic dog, which plays a key role in the transmission to humans3. Journal of Systems Science and Systems Engineering 27/07/20 Evolution Analysis of Societal Risk Events by Risk Maps. Allan J (2000). 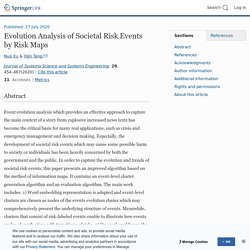 Topic Detection and Tracking: Event-Based Information Organization. Kluwer Academic Publishers Norwell, MA, USA. Google Scholar Allan J, Gupta R, Khandelwal V (2001). Temporal summaries of new topics. Proceedings of the 24th Annual International ACM SIGIR Conference on Research and Development in Information Retrieval 23: 10–18. JOURNAL OF SOIL SCIENCE AND ENVIRONMENTAL MANAGEMENT 24/01/20 Soil Erosion Risk Mapping Using Rusle, Gis And Remote Sensing: A Case Study Of The Watershed Of Zou, Centre Of Benin. Aware that erosion is one of the major environmental problems of this century, this study aims to apply the Revised Universal Soil Loss Equation in combination with GIS and remote sensing to spatialize the risk of water erosion on the watershed of Zou in the central region of Benin. 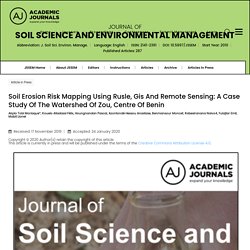 The five factors of RUSLE model (erosivity of rainfall, soil erodibility, slope length and inclination, cover and cropping practices) for the study area were determined and spatialized. The mean R-factor value is 914.88 MJ.mm.ha-1.year-1. The spatial distribution of the C-factor by class showed that 81.41% of the surface has low protection, 8.64% has medium protection; and 11% has from good to very good protection against water erosion.

The LS-factor value ranged from 0 to 39 on the. The mean soil erodibility is 0.15 t.h.MJ-1.mm-1 over the watershed. Journal of Biosafety and Biosecurity Volume 2, Issue 1, March 2020, Biosecurity risk mapping and gap analysis in South East Asia. Abstract Introduction In today’s globalized world where travel is commonplace, a threat in one region can easily spread throughout the whole world. 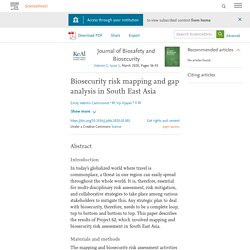 International Journal of Infectious Diseases Volume 67, February 2018, Global risk mapping for major diseases transmitted by Aedes aegypti and Aedes albopictus. Highlights Despite the fact that many arboviral diseases share the same vectors and often coexist, previous studies have focused on mapping the distribution of one or two diseases separately. 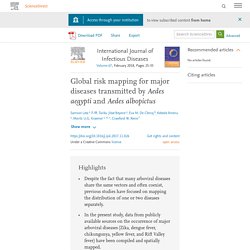 International Journal of Health Geographics 06/07/20 Geostatistical COVID-19 infection risk maps for Portugal. The proposed model for mapping the COVID-19 infection risk in Portugal builds upon the Poisson model for rare diseases proposed by Waller and Gotway [14] and extended into a geostatistical framework by Goovaerts [15] and Oliveira et al. [16]. 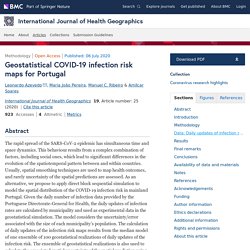 To predict the spatial distribution of the COVID-19 infection risk for a specific period and the associated uncertainty in mainland Portugal, we use a geostatistical model based on direct block sequential simulation (block-DSS; [13]), which accounts for the noise caused by spatial uncertain data as a function of population size and weights the estimation of the risk semivariogram accordingly. Consider , the number of infections notified (i.e., confirmed positive case tests) in each municipality (with municipalities) since COVID-19 pandemic was declared up to a given day, referenced by its geometric centroid with coordinates and , the size of the population at risk (i.e., resident population of a given municipality). 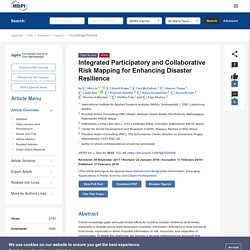 Information deficiency is most serious at local levels, especially in terms of spatial information on risk, resources, and capacities of communities. To tackle this challenge, we develop a general methodological approach that integrates community-based participatory mapping processes, one that has been widely used by governments and non-government organizations in the fields of natural resources management, disaster risk reduction and rural development, with emerging collaborative digital mapping techniques. We demonstrate the value and potential of this integrated participatory and collaborative mapping approach by conducting a pilot study in the flood-prone lower Karnali river basin in Western Nepal. ►▼ Show Figures Figure 1. 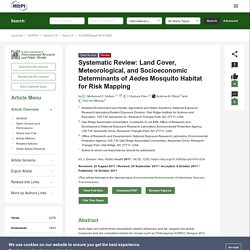 This review aims to analyze available spatiotemporal distribution models of Aedes mosquitoes and their influential factors. A combination of five sets of 3–5 keywords were used to retrieve all relevant published models. Int J Infect Dis. 2020 Jun 20; Spatial modeling, risk mapping, change detection, and outbreak trend analysis of coronavirus (COVID-19) in Iran (days between February 19 and June 14, 2020) Data for the 24 countries with the highest confirmed total cases (more than 50,000), deaths, total recovered, active cases, serious/critical, and test rates per 0.1 M pop (as of June 13, 2020) were compiled ( and analyzed (Table 1). 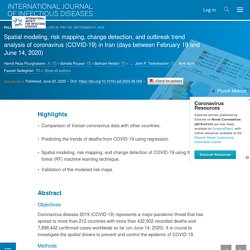 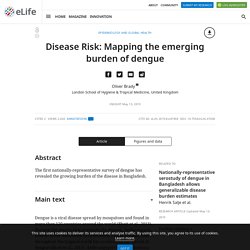 Because the species that transmits the disease, Aedes aegypti, lives in dense man-made environments, recent urbanization throughout the tropical world has accelerated the spread of dengue (Bhatt et al., 2013). Aedes aegypti is also the primary vector for a number of other diseases, including Zika, chikungunya and Yellow Fever, so understanding how to control the global emergence of dengue could help to prevent the spread of these diseases. However, getting accurate data on who is being infected is surprisingly difficult. Only a small proportion of people (11–32%) are likely to have symptoms after contracting dengue, with few being sick enough to require formal medical care (Bhatt et al., 2013; Undurraga et al., 2013).

FEMA_GOV 28/02/17 Risk Mapping, Assessment and Planning (Risk MAP) USDA - 2013 - National Insect & Disease Risk Maps. 2018 Updates Since 2012, significant tree mortality events from fire, forest pest outbreaks, and broad scale forest harvesting operations have reduced or in some cases eliminated hazard. For the 2018 NIDRM update, we adjusted the composite 2012 NIDRM by subtracting major disturbance events, thus accounting for reductions in hazard due to previous and ongoing tree mortality. The update does not account for increases in hazard due to tree growth, which can make additional trees susceptible and vulnerable to new forest pest attacks. Also, the update does not account for new pests on the landscape such as the Flathead fir borer, a wood boring beetle that primarily attacks stressed or weakened Douglas-fir, true firs, and western larch in Region 6. Major Risk Agents contributing to the 2018 National Insect and Disease Risk Map GIS Data Downloads Downloadable Zip files for each state include:

The disease appears to be hosted in wild mammals and transmitted by tick vectors although the diversity and identity of host and vector species remain unclear. MEM INST OSWALDO CRUZ, RIO DE JANEIRO, 110(2) April 2015 Waiting for chikungunya fever in Argentina: spatio-temporal risk maps. Chikungunya fever is a mosquito-borne disease caused by an alphavirus of the family Togaviridae. It is transmitted by the mosquitoes Aedes aegypti and Aedes albopictus, globally known as dengue vectors.

Chikungunya virus (CHIKV) was first isolated in Tanzania in 1952, followed by its spread in India and Southeast Asia (Weaver 2014). The disease is currently endemic in parts of Africa, Southeast Asia and on the Indian subcontinent. The first epidemics in Europe occurred in 2007 in northern Italy and in 2010 in southeastern France (ECDC 2014). In the Americas no transmission of CHIKV has been detected until the recent outbreak started on the island of Saint Martin, in October 2013, and expanded through the Caribbean during the first half of 2014 (ECDC 2014, Weaver 2014).

In low transmission settings such surveys do not produce the number of positives required for risk mapping or decision making [4]. While a handful of malaria elimination programmes, such as Swaziland [5] and the Solomon Islands and Vanuatu [31], map the households of malaria cases facilitating fine scale risk mapping, most countries have to rely on health facility level case data. PLOS 14/09/15 Mapping the Risk of Soil-Transmitted Helminthic Infections in the Philippines. Abstract Background In order to increase the efficient allocation of soil-transmitted helminth (STH) disease control resources in the Philippines, we aimed to describe for the first time the spatial variation in the prevalence of A. lumbricoides, T. trichiura and hookworm across the country, quantify the association between the physical environment and spatial variation of STH infection and develop predictive risk maps for each infection.

Highlights Serosurveys and outbreaks in animals indicate the circulation of WNV in Spain. Higher temperatures during the transmission season and the presence of wetlands were predictors of WNV circulation in Spain. Higher risk areas were concentrated in the south and the east of the country. PLOS - 28/06/13 - Rift valley fever risk map model and seroprevalence in selected wild ungulates and camels from kenya. Abstract Since the first isolation of Rift Valley fever virus (RVFV) in the 1930s, there have been multiple epizootics and epidemics in animals and humans in sub-Saharan Africa.

Prospective climate-based models have recently been developed that flag areas at risk of RVFV transmission in endemic regions based on key environmental indicators that precede Rift Valley fever (RVF) epizootics and epidemics. Although the timing and locations of human case data from the 2006–2007 RVF outbreak in Kenya have been compared to risk zones flagged by the model, seroprevalence of RVF antibodies in wildlife has not yet been analyzed in light of temporal and spatial predictions of RVF activity. Primarily wild ungulate serum samples from periods before, during, and after the 2006–2007 RVF epizootic were analyzed for the presence of RVFV IgM and/or IgG antibody.