USDA 15/12/16 USDA Revises Guidance on Date Labeling to Reduce Food Waste. Encourages Industry to use “Best if Used By” on Product Labels WASHINGTON, Dec. 14, 2016 – The U.S. 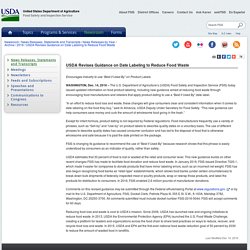 Department of Agriculture’s (USDA) Food Safety and Inspection Service (FSIS) today issued updated information on food product labeling, including new guidance aimed at reducing food waste through encouraging food manufacturers and retailers that apply product dating to use a “Best if Used By” date label. “In an effort to reduce food loss and waste, these changes will give consumers clear and consistent information when it comes to date labeling on the food they buy,” said Al Almanza, USDA Deputy Under Secretary for Food Safety. “This new guidance can help consumers save money and curb the amount of wholesome food going in the trash.” Except for infant formula, product dating is not required by Federal regulations. SAVVYROO 13/06/14 INFOGRAPHIE : How Much Food We Actually Waste in the United States.

Waste Management. 02/2010 Assessment of the State of Food Waste Treatment in the United States and Canada. ARS USDA - MARS 2013 - ARS MAGAZINE - Wasted Food: What We Are Doing To Prevent Costly Losses. ERS USDA 02/06/14 Food Loss—Questions About the Amount and Causes Still Remain. Feature: Food Choices & Health Highlights: ERS estimates that 31 percent, or 133 billion pounds, of food available for consumption at the retail and consumer levels in the United States in 2010 went uneaten. 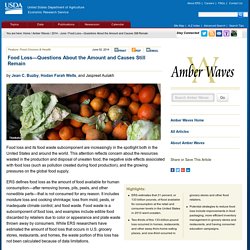 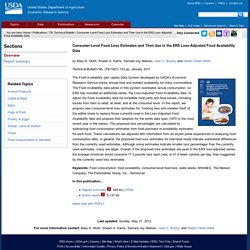 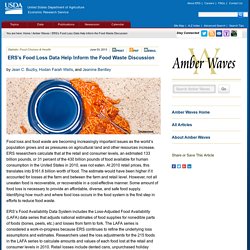 ERS researchers calculate that at the retail and consumer levels, an estimated 133 billion pounds, or 31 percent of the 430 billion pounds of food available for human consumption in the United States in 2010, was not eaten. At 2010 retail prices, this translates into $161.6 billion worth of food. The estimate would have been higher if it accounted for losses at the farm and between the farm and retail level. However, not all uneaten food is recoverable, or recoverable in a cost-effective manner. USDA 18/06/15 USDA Federal Marketing Orders Help Reduce Food Waste. When products do not meet a marketing order’s quality standards but are still edible, they can be diverted to secondary markets to minimize food waste while increasing producer returns. 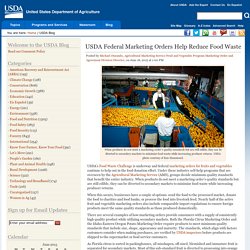 USDA photo courtesy of Ken Hammond. USDA’s Food Waste Challenge is underway and federal marketing orders for fruits and vegetables continue to help out in the food donation effort. Under these industry self-help programs that are overseen by the Agricultural Marketing Service (AMS), groups decide minimum quality standards that benefit the entire industry. When products do not meet a marketing order’s quality standards but are still edible, they can be diverted to secondary markets to minimize food waste while increasing producer returns. USDA via FLICKR 02/04/15 Infographie concernant le gaspillage dans la restauration scolaire aux USA. UNIVERSITY OF FLORIDA - 2012 - Présentation : Food and fuel: turning food waste to biogas. UNIVERSITY OF MINNESOTA - AVRIL 2014 - Food Loss and Waste in the US: The Science Behind the Supply Chain.

UNIVERSITY OF MINNESOTA 18/12/12 The Economic Impact of Food Waste. UNIVERSITY OF COLORADO - 2014 - Food recovery through donations as a response to food waste: A case study of two grocery stores participating in a food recovery program in Boulder. TIMES 16/09/15 U.S. Aims to Cut Food Waste in Half by 2030. Two federal agencies on Wednesday called for a 50% reduction in food waste in the United States by 2030 and announced a partnership with charities and private sector organizations to cut waste. 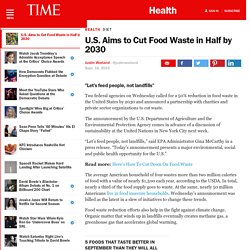 The announcement by the U.S. Department of Agriculture and the Environmental Protection Agency comes in advance of a discussion of sustainability at the United Nations in New York City next week. “Let’s feed people, not landfills,” said EPA Administrator Gina McCarthy in a press release. “Today’s announcement presents a major environmental, social and public health opportunity for the U.S.” Read more: Here’s How To Cut Down On Food Waste The average American household of four wastes more than two million calories of food with a value of nearly $1,500 each year, according to the USDA. SUPERMARKET NEWS 16/09/15 Retailers join with USDA, EPA on food waste reduction. The USDA and EPA on Wednesday called for a 50% reduction in food waste by 2030, the first national food waste reduction effort. 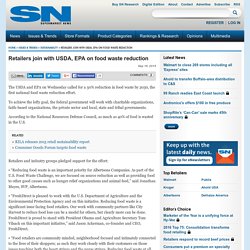 To achieve the lofty goal, the federal government will work with charitable organizations, faith-based organizations, the private sector and local, state and tribal governments. According to the National Resources Defense Council, as much as 40% of food is wasted in the U.S. Retailers and industry groups pledged support for the effort: • “Reducing food waste is an important priority for Albertsons Companies. As part of the U.S. . • “FreshDirect is pleased to work with the U.S. . • “Food retailers are community minded, neighborhood focused and intimately connected to the lives of their shoppers; as such they work closely with their customers on those issues touching both the heart strings and the purse strings. NYC_GOV 22/11/13 Mayor Bloomberg Announces More than 2,500 Tons of Food Waste Diverted from Landfills in First Six Months of Food Waste Challenge.

November 22, 2013 More Than 100 Restaurants Participated in the Program; City to Expand Program Beyond Restaurants to Include Hotels, Stadiums and Other Large Producers of Food Waste. 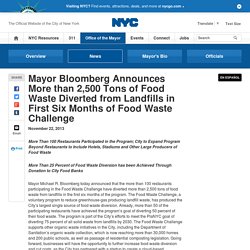 NRDC - AOUT 2012 - Wasted: How America Is Losing Up to 40 Percent of Its Food from Farm to Fork to Landfill. MODERN FARMER 30/09/15 USDA and EPA Announce First-Ever Plan To Reduce Food Waste. By Dan Nosowitz on September 30, 2015 Food waste is a huge problem in this country (and others, but today's news is about the US). 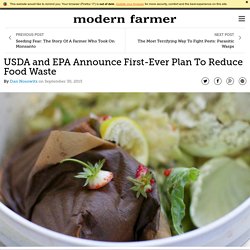 It's a major contributor to landfills, to methane emissions, to climate change, and eventually to the budget of Americans. For the first time, a federal agency is creating a program to combat it. At a joint event last week week, USDA head Tom Vilsack and EPA deputy administrator Stan Meiburg announced a simple plan with a multifaceted way of getting there: reduce the country’s food waste by 50 percent by 2030. “The United States enjoys the most productive and abundant food supply on earth, but too much of this food goes to waste,” said Vilsack in the USDA’s official statement. This is one of those problems that couldn’t be less sexy; nobody really cares about trash, nor wants to hear about it. MNN 09/04/15 USDA FoodKeeper app intended to fight food waste, but it may just cause confusion. Once you realize that about 40 percent of the food you bring home probably ends up wasted, you start to look for all the help you can get to stop throwing away food and money. 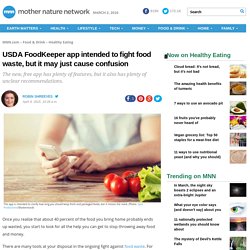 There are many tools at your disposal in the ongoing fight against food waste. For me, one of the best tools is a recipe that helps create a new dish out of leftovers like chicken breasts or spaghetti. Other tools include creative products like FreshPaper — which extends the life of fresh produce — knowledge about reducing your household food waste before it starts, and websites like Still Tasty that help consumers look past the arbitrary “use by” dates that are stamped on foods. The USDA released another tool to fight food waste this week: the FoodKeeper app. Its purpose is to inform users on "how to store food and beverages to maximize their freshness and quality" and offers the following features: Specific product pages for more than 400 items.

Fresh dairy is even more confusing. MEAT POULTRY 16/04/14 Alliance tackles food waste with new toolkit. 4/16/2014 - by Eric Schroeder WASHINGTON — The Food Waste Reduction Alliance (FWRA), a cross-sector industry initiative led by the Food Marketing Institute (FMI), the Grocery Manufacturers Association (GMA) and the National Restaurant Association (NRA), has released The Best Practices and Emerging Solutions Toolkit, a new solutions-based tool designed to help businesses in the food sector reduce the amount of food waste sent to landfill. “The Food Waste Reduction Alliance has been working to tackle food waste challenges within the food sector since 2011, but we know that there are companies out there that are just starting to look at the issue,” said Gail Tavill, vice-president of sustainable development for ConAgra Foods and one of the toolkit authors.

According to the FWRA, approximately 80 billion lbs. of food waste is discarded in US landfills each year, with some a byproduct of manufacturing, retail and food service operations. Specific topics discussed in the toolkit include: J Acad Nutr Diet. 2015 Dec;115(12):1914-8. Food Waste Reduction Efforts at the USDA. Int. J. Food System Dynamics 2 (4), 2011, 431-446 The Climate Change and Economic Impacts of Food Waste in the United States.

THE GUARDIAN 01/10/15 US food industry backs government plan to aggressively cut food waste. In September, the US government announced the first ever national goal to reduce America’s food waste, giving an extra push to a movement on the part of big brands to cut down on waste. The US Department of Agriculture (USDA) and the Environmental Protection Agency (EPA) – in partnership with charities and the private sector – is targeting a 50% cut in edible food waste by 2030. More than 133bn pounds of food is thrown away each year in the US, accounting for roughly one third of the nation’s food supply, according to the USDA. The cost to the global economy is about $750bn a year. Food waste is also the single biggest component of the country’s landfills, where it produces methane, one of the most potent greenhouse gases.

EPA is also issuing “Food Recovery Challenge Regional Achievement Certificates” to 24 organizations in all six New England states. Americans throw out more food than any other type of waste. In 2013, 37 million tons of food waste were generated, of which only 1.84 million tons (5 percent) were recovered, resulting in 35 million tons going into the nation’s landfills. The Massachusetts Dept. of Environmental Protection won EPA’s National Food Recovery Challenge Endorser Award for leading food recovery outreach and technical assistance efforts in the Commonwealth and for its direction of the Recyclingworks MA program administered by the Center for EcoTechnology. Keene State College in Keene, N.H. won the award for the best educational and outreach campaign. EPA 10/03/14 Présentation : Food too good to waste - RI Compost conference. EPA 21/03/14 Food Waste Assessment Tools. On this page Background. EPA 15/09/15 EPA, USDA Join to Set Nation’s First Food Waste Reduction Goals with Charities and Private Companies.