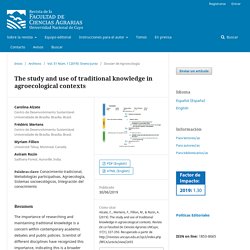 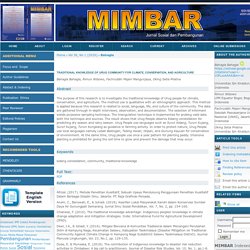 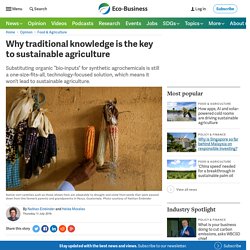 In fact, many scientists and others believe that it could use an entire overhaul. After decades of technological advances focused on grain production and the development of synthetic inputs, there is finally recognition that the benefits—higher crop yields and increased food supply—also come with side effects. These include widespread soil and water contamination, human displacement from the expansion of large-scale monoculture farm operations, health impacts including diabetes, and heavy reliance on fossil fuels, among others. The solution to these problems, as suggested by the United Nations’ Food and Agriculture Organization, is to transition to sustainable agriculture. Hardly a novel concept, sustainable agriculture is something indigenous groups have been developing and practicing for eons. 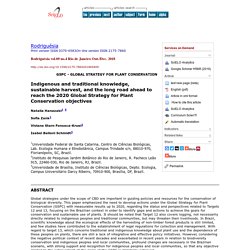 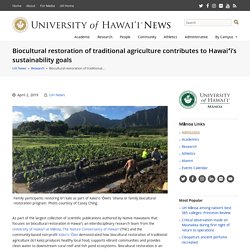 Photo courtesy of Casey Ching. As part of the largest collection of scientific publications authored by Native Hawaiians that focuses on biocultural restoration in Hawaiʻi, an interdisciplinary research team from the University of Hawaiʻi at Mānoa, The Nature Conservancy of Hawaiʻi (TNC) and the community-based non-profit Kakoʻo ʻŌiwi demonstrated how biocultural restoration of traditional agriculture (loʻi kalo) produces healthy local food, supports vibrant communities and provides clean water to downstream coral reef and fish pond ecosystems.

Biocultural restoration is an approach that incorporates both humanity and its connections to nature in a larger effort to restore the health, function and resilience of both land- and seascapes. Related UH News: Largest collection of scientific publications by Native Hawaiians, February 11, 2019. ENSIA 10/07/19 OPINION: WHY TRADITIONAL KNOWLEDGE — NOT EXTERNAL TECH — IS THE KEY TO TRULY SUSTAINABLE AGRICULTURE. SOIL USE AND MANAGEMENT 09/01/19 The use of Twitter for knowledge exchange on sustainable soil management. It is widely recognized that some farming practices within European crop production are reducing soil quality which in turn is affecting productivity (Jones et al., 2012). 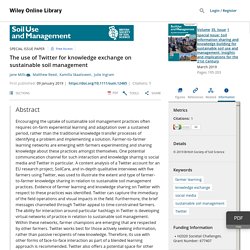 Currently, production levels are maintained by increased use of agricultural inputs and technology that may reduce profitability due to their costs, whilst also negatively affecting the environment (Rockström et al., 2009). Sustainable soil management (SSM) practices are required that both improve the quality of the soil and increase productivity. In a European context, such practices might include crop rotations, cover crops residue management, reduced tillage operations, fertilizer and manure management to restore soil carbon. Whilst the potential of these SSM practices to improve soil quality and productivity is recognized amongst the scientific community, their uptake by farmers across Europe has been slow (Lahmar, 2010). 2.1 Social media and farmer‐to‐farmer learning 2.2 Twitter usage in agricultural industry. Biodiversity and the Law C. McManis (2007) WW. Journal of Rural Studies Volume 59, April 2018, Local and farmers' knowledge matters! How integrating informal and formal knowledge enhances sustainable and resilient agriculture. 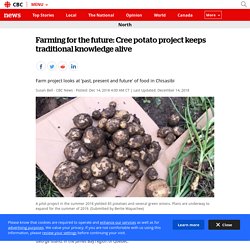 Rupert, 70, worked as a young man in the mid 1960s and early 1970s at a farm located on Fort George Island, in the James Bay region of Quebec. "Some of them were bigger than the fist of a man," said Rupert, whose mother would boil them with the skins on and mix them with lard. "They tasted very good. " N.W.T. farmer harvests potatoes near Arctic Circle It's a taste Rupert and others are hoping comes back to this community of approximately 5,000, located 1,400 kilometres north of Montreal on the shore of the La Grande river. For the past few years, a project to preserve traditional food knowledge, address food insecurity issues and revive an almost forgotten agricultural history has been gaining momentum. Gabriel Snowboy is the greenhouse coordinator at the Chisasibi Business Service Centre. This coming summer, the plan is to plant a much larger field of potatoes: 18 metres by 18 metres. Platform for Agrobiodiversity Research via AGROPOLIS - 2010 - Local solutions to address global challenges facing farmers and indigenous peoples. 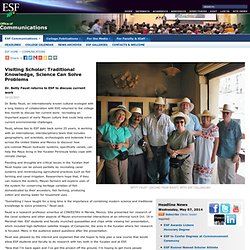 Betty Faust returns to ESF to discuss current work 10/23/2013 Dr. Betty Faust, an internationally known cultural ecologist with a long history of collaboration with ESF, returned to the college this month to discuss her current work: recreating an important aspect of early Mayan culture that could help solve current environmental challenges. Faust, whose ties to ESF date back some 25 years, is working with an international, interdisciplinary team that includes geographers, soil scientists, archeologists and botanists from across the United States and Mexico to discover how pre-colonial Mayan hydraulic systems, specifically canals, can help the Maya living in the Yucatan Peninsula today cope with climate change. 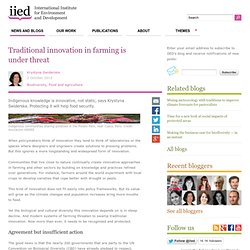 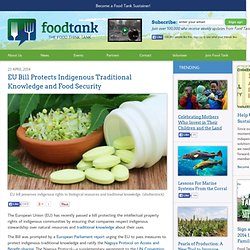 The Bill was prompted by a European Parliament report urging the EU to pass measures to protect indigenous traditional knowledge and ratify the Nagoya Protocol on Access and Benefit-sharing. The Nagoya Protocol—a supplementary agreement to the UN Convention on Biological Diversity (CBD) that was first adopted by Japan in October 2013—needs to be ratified by 50 member states of the UN General Assembly before it can be entered into force. So far, 30 member states have ratified the Protocol. “Ninety percent of genetic resources are in the South, and ninety percent of the patents are in the North,” said Green Member of the European Parliament Sandrine Bélier. OUVRAGE EN LIGNE - 2010 - Bioprospecting, Traditional Knowledge, and Benefit Sharing.