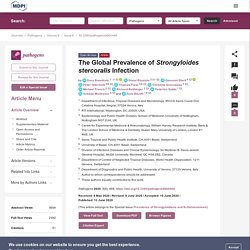 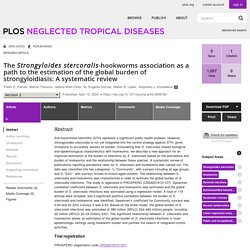 However, Strongyloides stercoralis is not yet integrated into the control strategy against STH, given limitations to accurately assess its burden. Considering that S. stercoralis shares biological and epidemiological characteristics with hookworms, we describe a new approach for an improved estimation of the burden of infections by S. stercoralis based on the prevalence and burden of hookworms and the relationship between these species.

A systematic review of publications reporting prevalence rates for S. stercoralis and hookworms was carried out. The data was classified into two categories: 1) “Community”, with surveys including all age groups, and 2) “SAC”, with surveys limited to school-aged children. Author summary. Martin K. Nielsen Equine Parasitology VIA YOUTUBE 21/04/20 The first episode of The Parasite Journey of the Horse: Strongyloides westeri. Acta Tropica Available online 3 December 2018 A diagnostic study comparing conventional and real-time PCR for Strongyloides stercoralis on urine and on faecal samples. Bisoffi et al., 2013 Z. 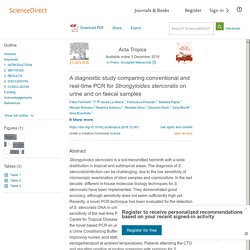 Background: Strongyloidiasis is mostly an asymptomatic infection and diagnosis of latent infections is difficult due to limitations of current parasitological and serological methods. 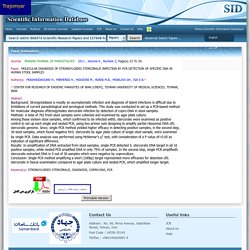 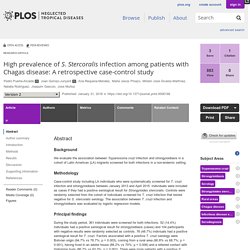 Conclusions T. cruzi infection was associated with strongyloidiasis in LA migrants attending a tropical diseases unit even after adjusting for epidemiological variables. Author summary Methods. FRONTIERS IN MICROBIOLOGY 06/12/17 Importance of a Rapid and Accurate Diagnosis in Strongyloides Stercoralis and Human T-Lymphotropic Virus 1 Co-infection: A Case Report and Review of the Literature. Introduction The soil-transmitted nematode Strongyloides stercoralis (S.) is estimated to infect at least 30–100 million people. 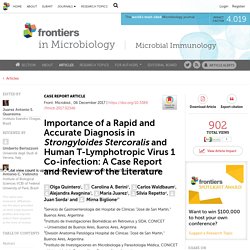 The prevalence has been increasing, mainly in Southern, Eastern, and central Europe, the Caribbean, Southeast Asia, Latin America, and sub-Saharan Africa (Buonfrate et al., 2015). The filariform larvae, which inhabit the soil, usually infect humans via skin penetration. This parasite is the only helminth able to complete its life cycle inside a single host and some larvae reinfect the host through the intestinal mucosa or perianal skin, using a process called autoinfection. WILEY - 2016 - Ivermectin versus albendazole or thiabendazole for Strongyloides stercoralis infection (Review) Kasr Al-Ainy VIA YOUTUBE 19/11/13 Dr.Azza - Parasitology - Nematodes 4 - "strongyloides stercoralis - capillaria philippinensis" Iugaza1 VIA YOUTUBE 14/04/14 Strongyloides stercoralis. 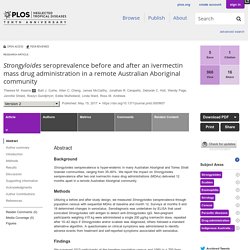 We report the impact on Strongyloides seroprevalence after two oral ivermectin mass drug administrations (MDAs) delivered 12 months apart in a remote Australian Aboriginal community. Methods Utilizing a before and after study design, we measured Strongyloides seroprevalence through population census with sequential MDAs at baseline and month 12. Findings We surveyed 1013 participants at the baseline population census and 1060 (n = 700 from baseline cohort and 360 new entrants) at month 12. Significance Two community ivermectin MDAs delivered 12 months apart by trained Aboriginal researchers in collaboration with non-Indigenous researchers resulted in a sustained and significant reduction in Strongyloides seroprevalence over 18 months. PLOS 31/07/17 Control of chronic Strongyloides stercoralis infection in an endemic community may be possible by pharmacological means alone: Results of a three-year cohort study. Abstract Objectives To assess the effect of treatment with ivermectin on the prevalence of S. stercoralis infection in an Australian Aboriginal population over a three year period, and to assess the validity of using a lower ELISA cut-off in diagnosis. 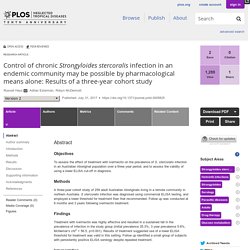 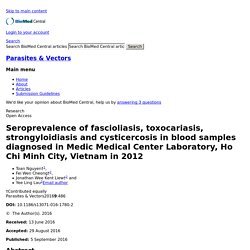 The seroprevalence rates found in this study may reflect that of people living in the southwest region of Vietnam, including HCMC, as most of the blood samples received originated from this region. Seroprevalence rates for all infections reported here are high, especially for toxocariasis (45.2 %) and strongyloidiasis (7.4 %). Transmission of some of the diseases can be explained by the dietary habits of the locals. 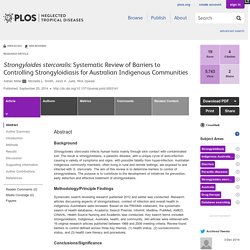 The result is strongyloidiasis, a parasitic disease, with a unique cycle of auto-infection causing a variety of symptoms and signs, with possible fatality from hyper-infection. Australian Indigenous community members, often living in rural and remote settings, are exposed to and infected with S. stercoralis. PLoS Negl Trop Dis. 2014 Aug; 8(8): e3018. Strongyloidiasis—An Insight into Its Global Prevalence and Management. Abstract Background Strongyloides stercoralis, an intestinal parasitic nematode, infects more than 100 million people worldwide. Strongyloides are unique in their ability to exist as a free-living and autoinfective cycle. Strongyloidiasis can occur without any symptoms or as a potentially fatal hyperinfection or disseminated infection.

The most common risk factors for these complications are immunosuppression caused by corticosteroids and infection with human T-lymphotropic virus or human immunodeficiency virus. Methodology and Results In this review, we have discussed various conventional methods for the diagnosis and management of this disease, with an emphasis on recently developed molecular and serological methods that could be implemented to establish guidelines for precise diagnosis of infection in patients and screening in epidemiological surveys.

-- react-text: 57 -->JavaScript is disabled on your browser. Please enable JavaScript to use all the features on this page. <! Parasite Epidemiology and Control Volume 1, Issue 2, Pages 15-204 (June 2016) Anthelmintics efficacy against intestinal strongyles in horses of Sardinia, Italy. Abstract Intestinal strongyles (IS) are the most important parasites of equids, due to their high prevalence worldwide, pathogenicity and the spread of drug-resistant populations.

BMC Infectious Diseases 2013, 13:78 Severe strongyloidiasis: a systematic review of case reports. SCARSDALE VETS - DEC 2013 – LungwormDogs with lungworm infection have been seen here at Scarsdale Vets, so it is important that.

SCARSDALE VETS - DEC 2013 – Lungworm Dogs with lungworm infection have been seen here at Scarsdale Vets, so it is important that all dog owners are aware of this worm and its potential affects. – guatemalt

Strongyloidiasis, an infection of an intestinal parasitic nematode, affects about 30–100 million people worldwide [1,2]. It is endemic in areas where sanitary conditions are poor and where the climate is warm and humid [3]. SCIMED CENTRAL - 2014 - Gastritis by Strongyloides Stercoralis. PLOS 11/07/13 Strongyloides stercoralis: Global Distribution and Risk Factors. Am. J. Trop. Med. Hyg., 88(3), 2013, pp. 420–425 Review: Strongyloidiasis: An Emerging Infectious Disease in China. PLOS 05/09/13 Lungworm Infections in German Dairy Cattle Herds — Seroprevalence and GIS-Supported Risk Factor Analysis. In November 2008, a total of 19,910 bulk tank milk (BTM) samples were obtained from dairy farms from all over Germany, corresponding to about 20% of all German dairy herds, and analysed for antibodies against the bovine lungworm Dictyocaulus viviparus by use of the recombinant MSP-ELISA.