BMC EVOLUTIONARY BIOLOGY 13/01/17 Quantifying predictors for the spatial diffusion of avian influenza virus in China. Phylogeographic evolution of AIV in China In this study the data set consisted of 320 AIV genomes which were obtained from 27 out of the 32 provinces in China. 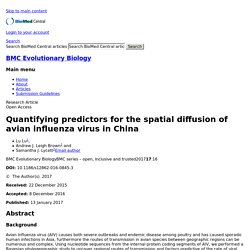 Of these, Guangdong, Fujian, Hunan, Jiangsu and Jiangxi provinces had the highest number of sequences (Additional file 2: Figure S1). The majority of AIV in the dataset was sampled from domestic birds, with 47.2% from domestic anseriformes (ducks and geese), 32.8% from domestic galliformes (chickens), and 19.4% from wild birds (Additional file 2: Figure S1). Subtypes H5, H6, H7 and H9 are prevalent in China and are circulating in domestic birds, and our dataset includes 31.9% H5N1 and 19.1% H9N2.

PLOS 04/04/17 Influenza A H5N1 and H7N9 in China: A spatial risk analysis. Abstract Background Zoonotic avian influenza poses a major risk to China, and other parts of the world. 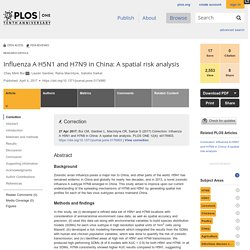 H5N1 has remained endemic in China and globally for nearly two decades, and in 2013, a novel zoonotic influenza A subtype H7N9 emerged in China. This study aimed to improve upon our current understanding of the spreading mechanisms of H7N9 and H5N1 by generating spatial risk profiles for each of the two virus subtypes across mainland China. Methods and findings Conclusions We provide projections of our risk models to public health policy makers so that specific high risk areas can be targeted for control measures. Int. J. Environ. Res. Public Health 2017, 14(2), 217 Comparison of Influenza Epidemiological and Virological Characteristics between Outpatients and Inpatients in Zhejiang Province, China, March 2011–June 2015. 1. 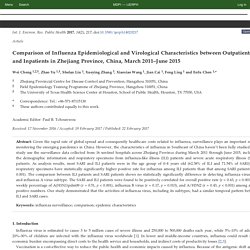 Introduction Influenza virus is estimated to cause 3 to 5 million cases of severe illness and 250,000 to 500,000 deaths each year, while 5%–10% of adults and 20%–30% of children are infected with the influenza virus worldwide [1]. In lower and middle-income countries, influenza could result in large economic burden encompassing direct costs to the health service and households, and indirect costs of productivity losses [2,3]. Vaccination is a cost-effective way to reduce the public health and economic impacts caused by influenza.

Because of the antigenic shift and drift of the virus, the influenza vaccine composition needs regular updates. Severe acute respiratory illness (SARI) surveillance is another type of surveillance for severe influenza-associated disease. Zhejiang Province located in the Southeastern China, featuring by its blooming economy and high density of population. 2. NATURE 24/08/16 SCIENTIFIC REPORTS - Characterization of H7N2 Avian Influenza Virus in Wild Birds and Pikas in Qinghai-Tibet Plateau Area. Sample collection In an effort to evaluate wild animals in the Qinghai Province ecosystem, we captured wild birds and black-lipped pikas (Ochotona curzoniae) from August 2006 to October 2009 in Qinghai Province some captured site where are on the distributions of generalized migration routes of migratory birds18). 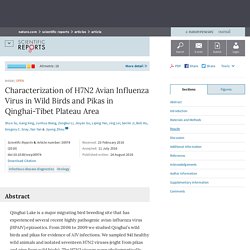 Infectious Diseases of Poverty 20165:59 08/06/16 Detection of reassortant avian influenza A (H11N9) virus in environmental samples from live poultry markets in China. H11N9 has been reported in wild waterfowl in Brazil, Belgium, the Republic of Kazakhstan, and Japan [15–19]. 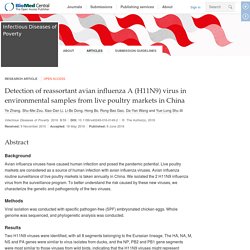 This subtype virus has also been isolated from ducks in southern China and Hong Kong SAR [20]. From 2009 to 2013, two H11N9 avian influenza viruses were isolated during routine surveillance. The samples were collected from chicken cages in LPMs. Phylogenetic analyses indicated that all the gene segments belonged to the Eurasian lineage. The HA, NA and NP genes originated from H11N9 viruses, whereas the internal gene segments clustered with H7N7, H7N6 and H4N6. Among influenza A viruses, H5 and H7 are considered to be notable avian influenza viruses, but not all H5 and H7 viruses display high pathogenic. Reassortment among different influenza viruses is considered to be the main mechanism for the generation of new viruses, which may bear enhanced mammalian transmission and pandemic potential. 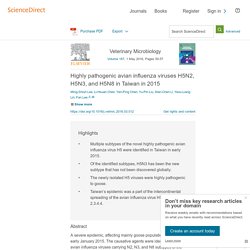 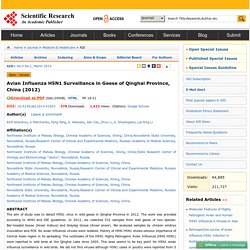 The work was provided according to WHO and OIE guidelines. In 2012, we collected 532 samples from wild geese of two species: Bar-headed Goose (Anser indicus) and Graylag Goose (Anser anser). We analyzed samples by chicken embryo inoculation and PCR. Cite this paper. PREVENTIVE VETERINARY MEDICINE - 2011 - Risk-based surveillance for avian influenza control along poultry market chains in South China: The value of social network analysis. 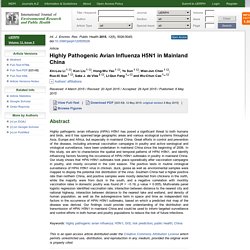 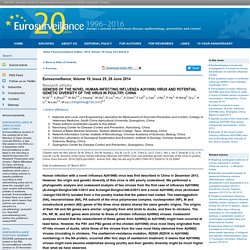 However, the origin and genetic diversity of this virus is still poorly understood. We performed a phylogenetic analysis and coalescent analysis of two viruses from the first case of influenza A(H10N8) (A/Jiangxi-Donghu/346-1/2013 and A/Jiangxi-Donghu/346-2/2013 and a novel A(H10N8) virus (A/chicken/Jiangxi/102/2013) isolated from a live poultry market that the patient had visited. The haemagglutinin (HA), neuraminidase (NA), PA subunit of the virus polymerase complex, nucleoprotein (NP), M and nonstructural protein (NS) genes of the three virus strains shared the same genetic origins. The origins of their HA and NA genes were similar: originally from wild birds to ducks, and then to chickens. BMC 27/10/14 Antibodies against H10N8 Avian Influenza Virus among Animal Workers in Guangdong Province before November 30, 2013, the First Recognized Human H10N8 Case. 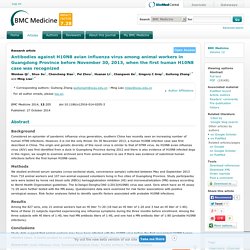 Journal of Infection Available online 6 January 2014 Emergence in China of human disease due to avian influenza A(H10N8) – Cause for concern? – guatemalt

In December 2013, China reported the first human case of avian influenza A(H10N8). A 73-year-old female with chronic diseases who had visited a live poultry market succumbed with community-acquired pneumonia. While human infections with avian influenza viruses are usually associated with subtypes prevalent in poultries, A(H10N8) isolates were mostly found in migratory birds and only recently in poultries.

Although not possible to predict whether this single intrusion by A(H10N8) is an accident or the start of another epidemic like the preceding A(H7N9) and A(H5N1), several features suggest that A(H10N8) is a potential threat to humans. Recombinant H10 could attach to human respiratory epithelium, and A(H10N4) virus could cause severe infections in minks and chickens. Avian Influenza A (H5N1) Virus Antibodies in Pigs and Residents of Swine Farms, Southern China Original Research Article Journ. Received 10 July 2013; received in revised form 11 September 2013; accepted 13 September 2013. published online 14 November 2013.

Background Since 1997, the H5 avian influenza viruses (AIVs) circulating in China have become an international concern. Clade 2.3.2 of H5N1 AIVs is genetically distinct from the viruses isolated before 2007 and antigenically different from the vaccine strains widely used in China. Swine farms in rural China are thought to play an important role in AIVs ecology. Objectives A seroepidemiological study was undertaken among swine farm residents and pigs to understand the prevalence of antibodies against H5N1 AIVs in southern China. GENOMEA - NOV/DEC 2013 - Genome Sequences of an H5N1 Highly Pathogenic Avian Influenza - Virus Isolated from Vaccinated Layers i. GEOCOMPUTATION - 2013 - Modelling the Avian Influenza H5N1 Virus Infection in Human and Analyzing its Evolution in China.

Methods A seroepidemiological survey was conducted in poultry workers, a group expected to have the highest level of exposure to H5N1-infected birds, from 3 counties with habitat lakes of wildfowl in Jiangsu province, China. Results The overall seropositive rate was 2.61% for H5N1 antibodies. Conclusions. VACCINE NEWS 20/04/12 China culls nearly 100,000 chickens in response to bird flu. Avian influenza China’s Ministry of Agriculture recently reported an outbreak of highly epidemic H5N1 avian influenza among poultry stocks. The outbreak began in the township of Touying in the northwestern Ningxia autonomous region.

More than 23,000 chickens at several farms have shown signs and symptoms of avian flu, according to the AFP. The MOA said that preventative measures have been put in place to stop the outbreak from spreading. Government officials have culled nearly 100,000 chickens in response, and a quarantine team has arrived in the city of Guyuan to teach poultry farmers how to protect their animals, according to WorldPoultry.net. “The epidemic is under control now,” the MOA said in a statement, ChinaDaily.com.cn reports. Experts consider China to be at high risk for a bird flu epidemic because it has the world’s largest poultry population and in many rural areas chickens are kept close to humans. This story filed in Asia and tagged H5N1.