CALIFORNIA BOUNTIFUL - MARS 2010 - The history of citrus in California. Mar. 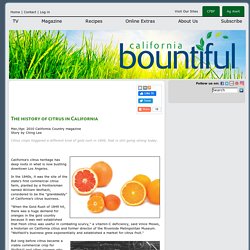 /Apr. 2010 California Country magazine Story by Ching Lee Citrus crops triggered a different kind of gold rush in 1849, that is still going strong today. California's citrus heritage has deep roots in what is now bustling downtown Los Angeles. In the 1840s, it was the site of the state's first commercial citrus farm, planted by a frontiersman named William Wolfskill, considered to be the "granddaddy" of California's citrus business.

"When the Gold Rush of 1849 hit, there was a huge demand for oranges in the gold country because it was well established that fresh citrus was useful in combating scurvy," a vitamin-C deficiency, said Vince Moses, a historian on California citrus and former director of the Riverside Metropolitan Museum. Photo Credit: Sunkist Growers Wolfskill grew hundreds of lemon and orange seedlings, which he secured from the San Gabriel Mission. The fruit was actually a mutation from an orange tree that grew in a Brazilian monastery. CDFA - 2018 California Citrus Acreage Report. Journal of Agricultural and Resource Economics 37(1):156–179 2012 Spatial Externalities of Pest Control Decisions in the California Citrus Industry. DAFF_GOV_AU 20/12/13 103-2013 - Changes to import requirements for Californian citrus. Acta Hort. 905, ISHS 2011 Integrated Approaches to Postharvest Disease Management in California Citrus Packinghouses.

PHYS_ORG 20/02/14 Researcher seeks solution to the spread of citrus greening disease. The entire California citrus industry is counting on Cornell vector biologist Michelle Cilia to quickly come up with a solution to stop the spread of a deadly disease that could decimate domestic citrus production. 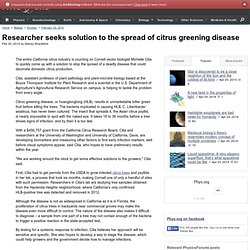 Cilia, assistant professor of plant pathology and plant-microbe biology based at the Boyce Thompson Institute for Plant Research and a scientist in the U.S. Department of Agriculture's Agricultural Research Service on campus, is helping to tackle the problem from every angle. Citrus greening disease, or huanglongbing (HLB), results in unmarketable bitter green fruit before killing the trees. The bacteria implicated in causing HLB, C.

Liberibacter asiaticus, has never been cultured. "We are working around the clock to get some effective solutions to the growers," Cilia said. First, Cilia had to get permits from the USDA to grow infected citrus trees and psyllids in her lab, a process that took six months, making Cornell one of only a handful of sites with such permission. GROWING PRODUCE 30/07/13 California Citrus Pest And Disease Program Extended Four Years. The California Department of Food and Agriculture (CDFA) has continued the California Citrus Pest and Disease Prevention Program for an additional four years. 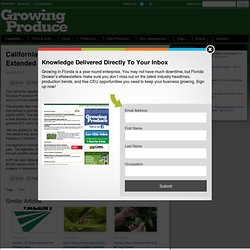 The extension came after several public hearings and a comment period that indicated overwhelming support for continuing the program among stakeholders. The program was created by legislation in 2009, establishing a mechanism for citrus producers to assess themselves to provide support for ongoing efforts to protect against citrus threats such as the Asian citrus psyllid (ACP). The psyllid is a pest that spreads the bacteria causing huanglongbing (HLB), or citrus greening, a fatal disease of citrus trees for which there is no cure. Producer assessments this year are expected to generate $15 million for the program. APS - JANV 2014 - Identification of Species of Botryosphaeriaceae Causing Bot Gummosis in Citrus in California. 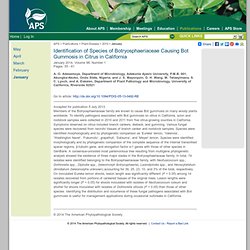 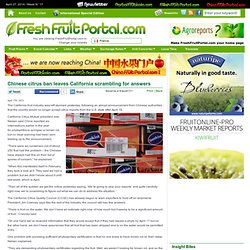 California Citrus Mutual president Joel Nelsen said China reported six interceptions earlier in the year for phytophthora syringae or brown rot, but no clear warning had been sent leading up to the announcement. “There were six containers out of about 250 that had the problem – the Chinese have always had this on their list of spores of concern,” he explained. “When this manifested itself in February, they took a look at it. “Then all of the sudden we get the notice yesterday saying, ‘We’re going to stop your exports’ and quite candidly right now, we’re scrambling to figure out what we can do to address the situation.” “There is fruit on the water. 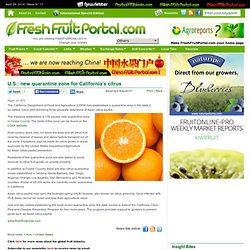 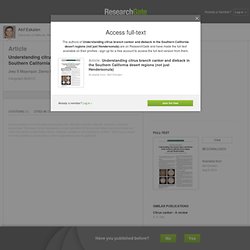 Mayorquin, Danny H. Wang, Joe Barcinas, Gary Bender, Akif EskalenEditor’s Note: The research reported on here is from one of several studies under the project titled “Investi-gating important diseases of citrus in California.” IntroductionGrowers in the desert regions of Southern California are concerned about a disease of grapefruit and lemon. This dis-ease is characterized by branch cankers and dieback, bark cracking/splitting, gumming, and the presence of black fun-gal spores underneath the bark. Page 2 May/June 2013 Citrograph 49Phylogenetic(s) – refers simply to the relationship among organisms inferred through an observable char-acteristic. Page 3. CALIFORNIA DEPARTMENT OF FOOD AND AGRICULTURE 23/10/13 California citrus pest and disease prevention program committee meeting -