NM RESTAURANTS 16/10/15 Requirements for Restaurant Inspections Changing for the State (Nouveau Mexique) What are the changes to restaurant inspections from the state environment department and what do they mean for you? 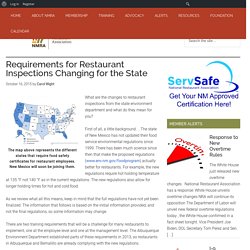 First of all, a little background… The state of New Mexico has not updated their food service environmental regulations since 1999. There has been much science since then that make the proposed regulations (www.env.nm.gov/foodprogram) actually better for restaurants. For example, the new regulations require hot holding temperature at 135 °F not 140 °F as in the current regulations.

The new regulations also allow for longer holding times for hot and cold food. As we review what all this means, keep in mind that the full regulations have not yet been finalized. There are two training requirements that will be a challenge for many restaurants to implement, one at the employee level and one at the management level. 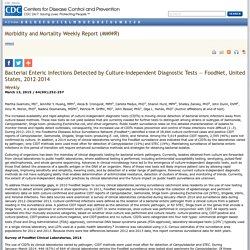 To address these knowledge gaps, in 2010 FoodNet began to survey clinical laboratories serving surveillance catchment area residents on the use of new testing methods to detect enteric pathogens in stool specimens. Survey of FoodNet Clinical Laboratories, 2014 The use of CIDTs by clinical laboratories varied by pathogen; CIDT methods were used most often for detection of Campylobacter and STEC. FDA 13/04/15 FDA Releases 2012 NARMS Retail Meat Annual Report, 2013 Preliminary Data; Some Encouraging Early Trends Seen. Agency announces transition to more comprehensive and timely reporting UPDATED April 15, 2015: The FDA has updated the 2013 Retail Meat Interim Report and information below to reflect corrections to data in the report. 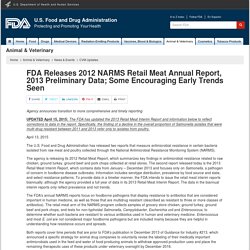 Specifically, the finding of a decline in the overall proportion of Salmonella isolates that were multi-drug resistant between 2011 and 2013 refer only to isolates from poultry. April 13, 2015 The U.S. Food and Drug Administration has released two reports that measure antimicrobial resistance in certain bacteria isolated from raw meat and poultry collected through the National Antimicrobial Resistance Monitoring System (NARMS). 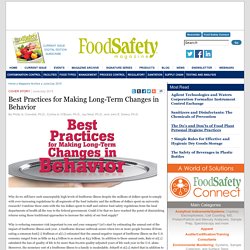 Crandall, Ph.D., Corliss A. O’Bryan, Ph.D., Jay Neal, Ph.D., and John E. Delery, Ph.D. Why do we still have such unacceptably high levels of foodborne illness despite the millions of dollars spent to comply with ever-increasing regulations by all segments of the food industry and the millions of dollars spent on university research? Why is reducing consumer risk important to you and your company? • The total costs of the consumers’ medical treatment • The loss of personal wages • The cost to the food company to recall the contaminated food products • Intangibles with real dollar costs like the loss of consumers’ confidence in your company’s brand.

PARLEMENT EUROPEEN - Réponse à question E-002743-15 US Meat Animal Research Center in Nebraska. A recent article published in the New York Times of 19 January 2015 reports on the US Meat Animal Research Center in southern Nebraska, where scientists are using ‘surgery and breeding techniques to re-engineer the farm animal to fit the needs of the 21st century meat industry’. 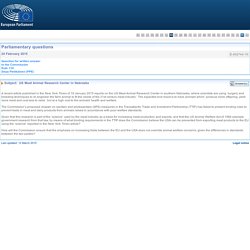 The expected end result is to have animals which ‘produce more offspring, yield more meat and cost less to raise’, but at a high cost to the animals' health and welfare. The Commission’s proposed chapter on sanitary and phytosanitary (SPS) measures in the Transatlantic Trade and Investment Partnership (TTIP) has failed to present binding rules to prevent trade in meat and dairy products from animals raised in accordance with poor welfare standards. How will the Commission ensure that the emphasis on increasing trade between the EU and the USA does not override animal welfare concerns, given the differences in standards between the two parties? FDA 13/04/15 FDA Releases 2012 NARMS Retail Meat Annual Report, 2013 Preliminary Data; Some Encouraging Early Trends Seen. 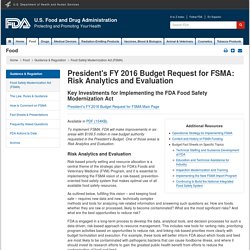 To implement FSMA, FDA will make improvements in six areas with $109.5 million in new budget authority requested in the President’s Budget. One of those areas is Risk Analytics and Evaluation. Risk Analytics and Evaluation Risk-based priority setting and resource allocation is a central theme of the strategic plan for FDA’s Foods and Veterinary Medicine (FVM) Program, and it is essential to implementing the FSMA vision of a risk-based, prevention-oriented food safety system that makes optimal use of all available food safety resources. FOOD CONTROL - 2013 - Food allergy knowledge, attitudes, practices, and training of foodservice workers at a university foodservice operation in the Midwestern United States.