6 Inventors Killed by Their Own Inventions. 1. 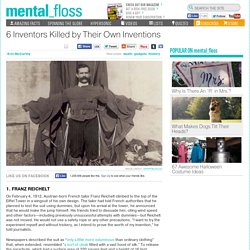 Undercover Art: 6 Paintings That Were Hiding Something. Just underneath the surface of many paintings, both famous and obscure, is another hidden painting that could have been. 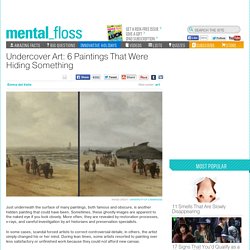 Sometimes, these ghostly images are apparent to the naked eye if you look closely. More often, they are revealed by restoration processes, x-rays, and careful investigation by art historians and preservation specialists. In some cases, scandal forced artists to correct controversial details; in others, the artist simply changed his or her mind. 5 of the Fiercest One-Liners in History.

Finding the right words when detonating an atomic bomb or sacrificing one's life for friendship came easy for these people. 1. 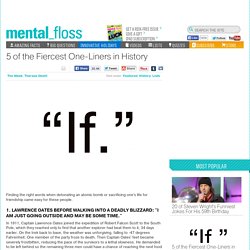 Lawrence Oates before walking into a deadly blizzard: "I am just going outside and may be some time. " In 1911, Captain Lawrence Oates joined the expedition of Robert Falcon Scott to the South Pole, which they reached only to find that another explorer had beat them to it, 34 days earlier. On the trek back to base, the weather was unforgiving, falling to -47 degrees Fahrenheit. One member of the party froze to death. 14 Facts About 'Anne of Green Gables' Author L.M. Montgomery. L.M. 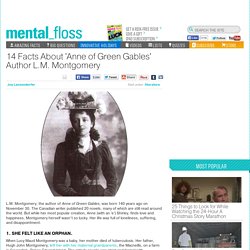 Montgomery, the author of Anne of Green Gables, was born 140 years ago on November 30. The Canadian writer published 20 novels, many of which are still read around the world. What 1939 Thought Fashion in 2000 Would Look Like. 121K 10.7KShare320 In this British Pathé clip, fashion designers predict what the future of fashion will be. 11 Movements to Replace Common Things. While the world around us is in a constant state of flux, it’s nice to know that some things never change—until now. 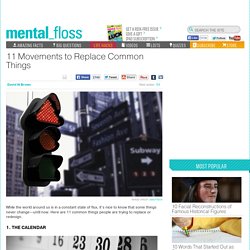 Here are 11 common things people are trying to replace or redesign. 1. The Calendar. Rosetta's Comet Compared to Los Angeles. 10 Facial Reconstructions of Famous Historical Figures. Why look at a painting of a historical figure when you can come face to face with one? 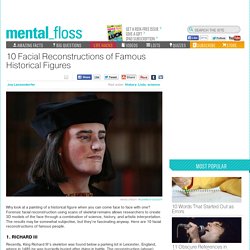 Forensic facial reconstruction using scans of skeletal remains allows researchers to create 3D models of the face through a combination of science, history, and artistic interpretation. The results may be somewhat subjective, but they’re fascinating anyway. Here are 10 facial reconstructions of famous people. Countries as Named in Their Own Languages. Countries are called by different names depending on who’s doing the calling. 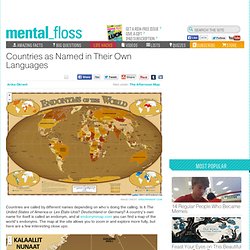 Is it The United States of America or Les États-Unis? Deutschland or Germany? A country’s own name for itself is called an endonym, and at endonymmap.com you can find a map of the world’s endonyms. The map at the site allows you to zoom in and explore more fully, but here are a few interesting close ups: Here you can see how in local languages, country names can be quite different from their English versions. In Sango, the primary language of the Central African Republic, the country is called Ködörösêse Tî Bêafrîka. 10 Allegedly Cursed Objects Throughout History. 5 Bodies That Refused to Rot. You live, you die, you rot. 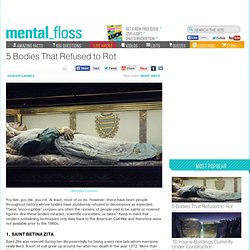 At least, most of us do. However, there have been people throughout history whose bodies have stubbornly refused to decompose as expected. 16 Weird Forgotten English Words We Should Bring Back. English changes all the time, often in subtle ways—so it's not surprising that we've lost many delightful words and phrases along the way. 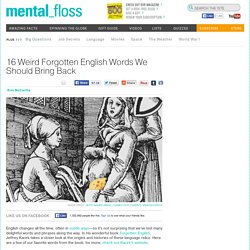 How Many Spiders Do You Really Swallow in Your Sleep? 10 Female Gangsters You Should Know About. What Does Space Smell Like? What's Inside the Millennium Time Capsule? The National Millennium Time Capsule was designed to house the "artifacts, ideas, or accomplishments that represent America at this time in history. " So Twinkies, obviously. Though the Twinkies were later removed because they could have attracted mice. (According to the New York Times, they were eaten by the White House Millennium Council staff.)

8 Surprisingly Fun Games Uncle Sam Told Soldiers to Play in 1943. In 1943, the U.S. War Department issued a manual packed with "informal" games that men might play if they were lucky enough to have downtime. The games were intended to occupy mind and body, manage stress, and subtly provide tactical training. Which might explain why so many games involved tackling and beating your fellow soldiers. But other, less physical games translate great from the barracks to the backyard. River In China Mysteriously Turns Red. According to Na Wan, a resident of a small village in Cangnan, everything about the river that runs through his town in eastern China's Zhejiang province seemed perfectly normal early Thursday morning: "But then suddenly, within the space of a few minutes, the water started turning darker and eventually was completely red. 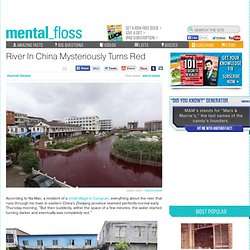 " No one knows exactly what caused the river to run red, and locals say nothing like this has ever happened before. 'I know, right?': The anatomy of a wonderfully nonsensical phrase. Grammar Nerds Will Love Weird Al's Latest Parody. 8 Old Wedding Traditions You Didn't Know Existed. Reddit user Killthekeywork via College Humor It appears that a growing number of bridal parties are celebrating the joy and solemnity of marriage by mooning the wedding photographer. Hey, how you want to remember your wedding is your business, and if you and your friends are a cheeky crowd, well, bottoms up. Besides, showing your tush to the camera isn’t the strangest or most objectionable wedding tradition that the human race has dreamt up in the past few centuries.

Note: Nearly all of these traditions were recorded by non-native observers between 100 and 250 years ago. 50 Collective Nouns to Bolster Your Vocabulary. 10 Dangerous Ways to Amuse Yourself from an 1820 Book. The second edition of Endless Amusement, published in 1820, promises “nearly 400 entertaining experiments in various branches of science.” 14 Reasons World War I Happened (And Four Things That Could Have Stopped It) For the past few years, Erik Sass has been covering the events that led to World War I exactly 100 years later. 13 Little-Known Punctuation Marks We Should Be Using. 10 Deserted Places and Why They Were Abandoned.

6 Cautionary Tales That Terrified Kids of Yesteryear. What the Internet Looked Like in 1995. Image credit: YouTube / Computer Chronicles. 17 Movies Based on Magazine and Newspaper Articles (And Where To Read Them) Indonesian Mimic Octopus Is The Ultimate Master of Disguise. Indonesian Mimic Octopus. Watch These Big Cats Unravel Toilet Paper. 10 Facebook Status Updates Gone Horribly Wrong. Facebook is usually just a running feed of pictures, talk about the weather and inspirational quotes. (Mine is, anyway; maybe your friends are more exciting.) But sometimes Facebook status updates are a little more interesting. 5 Americans Who Defected to North Korea. 9 Delightfully Bizarre Christmas Cards from the 1800s. 7 Great Places with Horrifying Names. 7 Fascinating Facts About Narwhals. 16 Fun Facts About Hedgehogs. 6 Amazing Animals That Practically Lived Forever.