The 10 Most Confusing Movies of All Time. Nobody loves summer blockbusters more than we do. 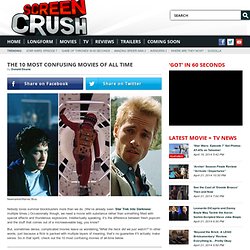 (We’ve already seen ‘Star Trek Into Darkness‘ multiple times.) Occasionally though, we need a movie with substance rather than something filled with special effects and thunderous explosions. Intellectually speaking, it’s the difference between fresh popcorn and the stuff that comes out of a microwaveable bag, you know? But, sometimes dense, complicated movies leave us wondering,“What the heck did we just watch?” It's A Gamble: 10 Of The Biggest Box Office Bombs.

Sometimes, it pays off to take a gamble. 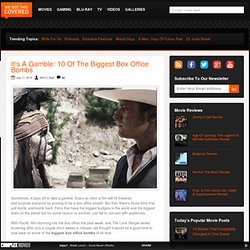 Every so often a film will hit theatres and surprise everyone by proving to be a box office smash. But then there’s those films that just bomb, and bomb hard. Films that have the biggest budgets in the world and the biggest stars on the planet but for some reason or another, just fail to connect with audiences. With Pacific Rim storming into the box office this past week, and The Lone Ranger slowly drowning after only a couple short weeks in release, we thought it would be a good time to look back on some of the biggest box office bombs of all time. Now, these are not the biggest and we know that there are certainly films out there that have done a lot worse than what we’ve put on this list. So, without further ado, we present to you ten films that despite all the money and backing in the world, lost their studios a ton of money. Next 1) John Carter Production Budget: $250 million Worldwide Box Office Total: $282,778,100 Previous Next.

10 Great Teen-Angst Films You Don't Know. Movies and TV Teenage wildlife, left alone and uncared for by a world that – in the immortal words of many a teen – ‘just doesn’t understand,’ has always found sanctuary within the realm of cinema. 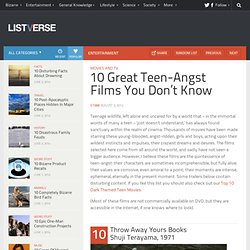 Thousands of movies have been made starring these young-blooded, angst-ridden, girls and boys, acting upon their wildest instincts and impulses, their craziest dreams and desires. The Sundance Springboard: 10 Actors to Watch Out For at the 2014 Sundance Film Festival. The 10 best deleted scenes ever. The Avengers, Phone Booth and Shaun of the Dead: making those deleted scenes count Movie directors have a million and one decisions to make when creating a film; like what camera angle to use and when, how to have an actor/actress deliver a line, which suit to wear at the premiere. 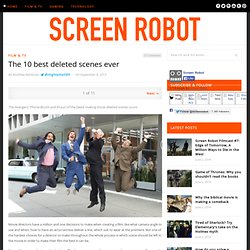 But one of the hardest choices for a director to make throughout the whole process is which scene should be left in the movie in order to make their film the best it can be. Several factors weigh in on the decision. This leaves many quality scenes on the cutting room floor, and directors pulling their hair making that tough decision. Luckily for us, such scenes are often included on the DVD extras, or sometimes in a director’s cut designed to reintroduce those scenes. Share 3 Matthew Rathbone. Campy Movies. Banned! The Ultimate Midnight Movies. With the ever increasing number of provocative movies looking to push the boundaries of human taste and decency, we here at THN have decided to take a look at the stand-out movies that really got us this far and did they really deserve the notoriety they received. 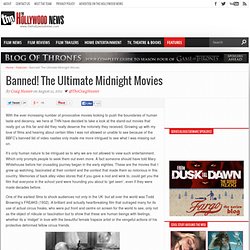 Growing up with my love of films and hearing about certain titles I was not allowed or unable to see because of the BBFC’s banned list of video nasties only made me more intrigued to see what I was missing out on. It’s only human nature to be intrigued as to why we are not allowed to view such entertainment. Which only prompts people to seek them out even more.

A fact someone should have told Mary Whitehouse before her crusading journey began in the early eighties. The Top 10 Most Extreme Bad Ass Movie Characters of all time. from ryan_shaw. 10. 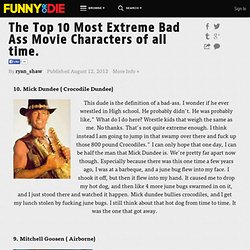 10 Movie Endings With Disturbing Implications You Totally Missed » Page 11 of 11. The Iron Giant tells the classic story of boy meets giant metallic alien monster, and also happens to be one of the most underrated animated movies of the ’90s (and ever, really). 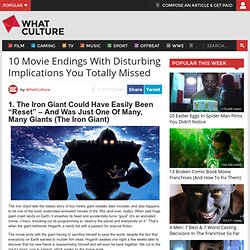 When said huge giant crash lands on Earth, it smashes its head and accidentally turns “good” (it’s an animated movie, c’mon), knocking out its programming to “destroy the planet and everybody on it.” That’s when the giant befriends Hogarth, a nerdy kid with a passion for science-fiction. The movie ends with the giant having to sacrifice himself to save the world, despite the fact that everybody on Earth wanted to murder him dead. Hogarth awakes one night a few weeks later to discover that his new friend is reassembling himself and will soon be back together. We cut to the giant’s head, now in Iceland, which smiles as the movie ends… But Wait… The 20 Most Satisfying Happy Movie Endings Ever. Deep down in the far reaches of our very human essence, we all pray for a happy ending. 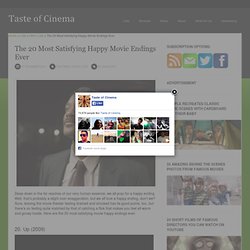 Well, that’s probably a slight over-exaggeration, but we all love a happy ending, don’t we? Sure, leaving the movie theater feeling drained and shocked has its good points, too, but there’s no feeling quite matched by that of catching a flick that makes you feel all warm and gooey inside. Here are the 20 most satisfying movie happy endings ever. The Mist - Which Movies Have the Most Terrible Endings? 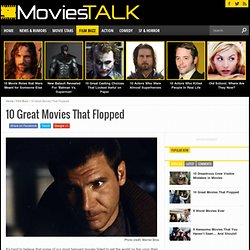 It’s hard to believe that some of our most beloved movies failed to set the world on fire upon their initial release. Many movies make hundreds of millions of dollars in their opening weekend and then quietly fade into oblivion. Others slowly build up a cult following after a disappointing debut and are later regarded as visual masterpieces. The 13 Best Movies of 2013 That No One Is Talking About. Lore. 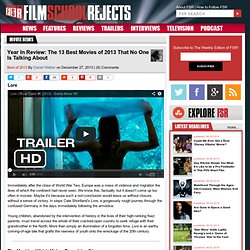 The Greatest Movies We Never Want to See Again: ‘Requiem for a Dream’ The 100 Best Sci-Fi Movies Ever. Top 10 Movies 2013 / 2014. 10 Summer Blockbusters To Look Forward To in 2014. Every summer, as the big movies approach, I always feel like the following summer won’t stack up. In 2012, we got the ultimate superhero team up as Marvel unleashed The Avengers. Christopher Nolan completed his legendary Batman trilogy with The Dark Knight Rises. Spider-Man returned to the big screen with a completely new look. How would 2013 top that? How about Iron Man 3, Star Trek Into Darkness, Man of Steel, Pacific Rim & The Wolverine? COUNTDOWN | Top 10 Summer Movies 2013.