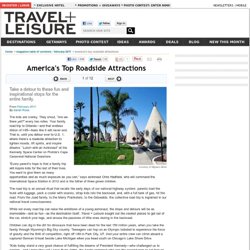 They shout, “Are we there yet?” Every two miles. Your family road trip to Orlando—and that endless ribbon of I-95—feels like it will never end. That is, until you detour over to U.S. 1, where there’s a roadside attraction to lighten moods, lift spirits, and inspire dreams: “Lunch with an Astronaut” at the Kennedy Space Center on Florida’s Cape Canaveral National Seashore. “Every parent’s hope is that a family trip will inspire kids for the rest of their lives. The road trip is an annual ritual that recalls the early days of our national highway system: parents load the trunk with luggage, pack a cooler with snacks, strap kids into the backseat, and, with a full tank of gas, hit the road.

While not every road trip can raise the ambitions of a young astronaut, the stops and detours will be as memorable—and as fun—as the destination itself. A childhood journey can be a world-changer if it creates a future explorer, explains Aldrin. Best of the Twin Cities 2011 - Minnesota Monthly - November 2011 - Minneapolis, St. Paul, Minnesota. Best Artisan-Made: I like you. Lindstrom, Minnesota. Lindström is a city in Chisago County, Minnesota, United States, located 35 miles northeast of the Twin Cities. 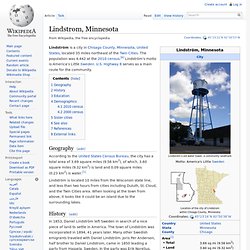 The population was 4,442 at the 2010 census.[6] Lindström's motto is America's Little Sweden. U.S. Highway 8 serves as a main route for the community. Geography[edit] According to the United States Census Bureau, the city has a total area of 3.69 square miles (9.56 km2), of which, 3.60 square miles (9.32 km2) is land and 0.09 square miles (0.23 km2) is water.[1] Lindström is located 10 miles from the Wisconsin state line, and less than two hours from cities including Duluth, St. History[edit] Lindström celebrates Karl Oskar and Kristina annually with Karl Oskar Days. Lindström was settled predominantly by Swedish immigrants and their families. Education[edit] Lindstrom is part of the Chisago Lakes School District #2144. Demographics[edit] 2010 census[edit] 2000 census[edit] The median income for a household in the city was $44,980, and the median income for a family was $50,519.

Paul Bunyan, Ball of Twine & Other Highway Highlights : Explore Minnesota. When driving through Minnesota, don't be surprised if you come across something claiming to be the "world's largest" of its kind. 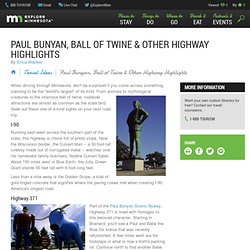 From animals to mythological creatures to the infamous ball of twine, roadside attractions are almost as common as the state bird. Seek out these one-of-a-kind sights on your next road trip. Craft fairs in minnesota. Hidden Gems Worth Finding : Explore Minnesota. This summer, seek out Minnesota’s off-the-radar attractions Judy Garland Museum Best known for her role as Dorothy in “The Wizard of Oz,” Judy Garland is not from Kansas but from Grand Rapids, Minnesota, where she was born by the name Frances Ethel Gumm in 1922. 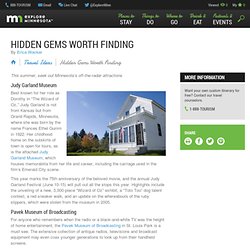 Her childhood home on the outskirts of town is open for tours, as is the attached Judy Garland Museum, which houses memorabilia from her life and career, including the carriage used in the film’s Emerald City scene. Bed & Breakfast Guide for Minnesota's North Shore of Lake Superior. Shipwrecks along Minnesota's North Shore of Lake Superior. Twenty miles to the southwest, two sister ships were experiencing similar fates. 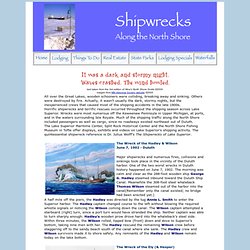 The steel steamer Lafayette was towing the 436-foot barge Manila. Darkness and ceaseless sheets of snow combined for zero visibility. The captain had no idea where they were until he heard breakers hitting shore on the starboard side. A few moments after this realization, waves smashed the 454-foot Lafayette into massive rocks fifty feet offshore. With no time to react, the Manila drove into the Lafayette's stern, busting her in two in minutes. Seventeen more lives were lost when 427-foot Henry Steinbrenner went down May 11, 1953. Visit Saint Paul. Fairs & Festivals : Explore Minnesota. Things to do in Saint Paul – 62 Saint Paul Attractions. Best Hiking Trails In The Twin Cities. If Minnesota is known for one thing, it’s the great outdoors and hiking is one of the best ways to experience it. 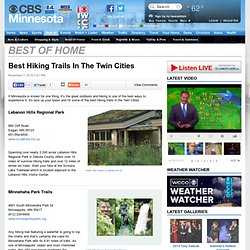 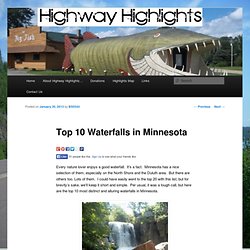 It’s a fact. Minnesota has a nice selection of them, especially on the North Shore and the Duluth area. But there are others too. Lots of them. I could have easily went to the top 20 with this list, but for brevity’s sake, we’ll keep it short and simple. City Museum. City Museum is a museum, consisting largely of repurposed architectural and industrial objects, housed in the former International Shoe building in the Washington Avenue Loft District of St. 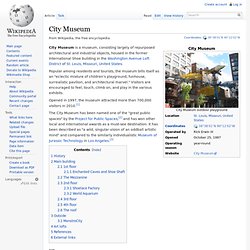 Louis, Missouri, United States. Popular among residents and tourists, the museum bills itself as an "eclectic mixture of children's playground, funhouse, surrealistic pavilion, and architectural marvel. " Things to do in Minnesota – 909 Minnesota Attractions. 50 Fun Things to Do in Minnesota. Are you having fun yet? 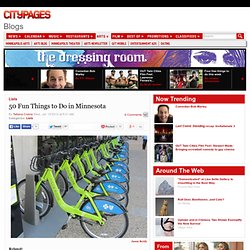 150 Things To Do In Minneapolis. Hiking near St. Paul.