WHO_HSE_EPR_2008_8c.pdf. Let the Glastonbury clean-up commence: Litterpickers get to work at Worthy Farm - Music News - Digital Spy. Glastonbury Festival is over for another year, but not for the team of 800 volunteers who are tidying the site today. 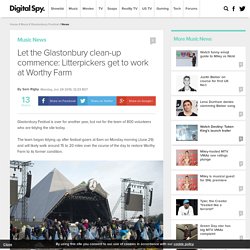 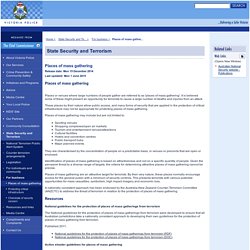 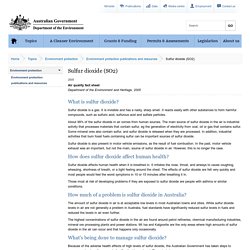 Those most at risk of developing problems if they are exposed to sulfur dioxide are people with asthma or similar conditions. How much of a problem is sulfur dioxide in Australia? Victoria Police - Places of mass gathering. MassGatheringflyer_EN.pdf. Mass gatherings pose threat to the spread of infectious diseases. This summer, millions of people will converge in London for the 2012 Olympic Games. 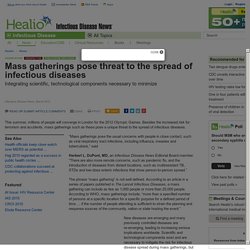 Besides the increased risk for terrorism and accidents, mass gatherings such as these pose a unique threat to the spread of infectious diseases. “Mass gatherings pose the usual concerns with people in close contact, such as viral respiratory tract infections, including influenza, measles and tuberculosis,” said Herbert L. DuPont, MD, an Infectious Disease News Editorial Board member. Mass_Gatherings.pdf. The Top 5 Harmful Toxins in Air. A major part of how healthy we are comes from how clean the air we breathe really is. 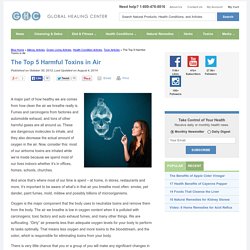 Fireworks - Cheap Thrills with Toxic Consequences. Pollution from Fireworks is an Unnecessary Risk to Our Personal and Environmental Health The Polluting Patriot -- How Fireworks Pollute -- The Toxic Elements -- Research Fireworks Alternatives -- More Thoughts on Fireworks -- References Why Celebrate those Special Occasions by Polluting? 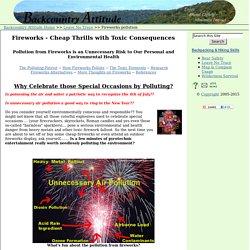 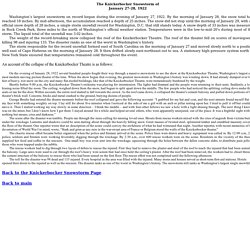 By the morning of January 28, the snow total had reached 18 inches. By mid-afternoon, the accumulation reached a depth of 25 inches. The snow did not stop until the morning of January 29, with an official snow depth of 28 inches, a single storm snowfall record for that still stands today. A snow depth of 33 inches was measured in , three miles to the north of ’s official weather station. Mass gatherings. Weather and Environmental Hazards at Mass Gatherings – PLOS Currents Disasters. Introduction Reviews of mass gathering events have traditionally concentrated on crowd variables that affect the level and type of medical care needed. 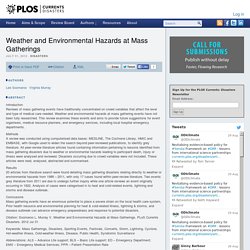 Weather and environmental hazards at mass gathering events have not been fully researched. This review examines these events and aims to provide future suggestions for event organisers, medical resource planners, and emergency services, including local hospital emergency departments. Methods A review was conducted using computerised data bases: MEDLINE, The Cochrane Library, HMIC and EMBASE, with Google used to widen the search beyond peer-reviewed publications, to identify grey literature.

All peer-review literature articles found containing information pertaining to lessons identified from mass gathering disasters due to weather or environmental hazards leading to participant death, injury or illness were analysed and reviewed. Disasters occurring due to crowd variables were not included. Citation: Soomaroo L, Murray V. Introduction. Concerts are Bad for the Environment. ~ via Abbie Michelle.

Plastic cups are all over the ground and the smell of beer lingers in the air. 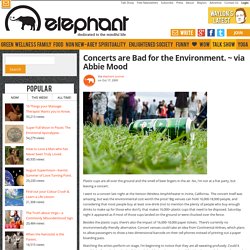 No, I’m not at a frat party, but leaving a concert. I went to a concert last night at the Verizon Wireless Amphitheater in Irvine, California. The concert itself was amazing, but was the environmental cost worth the price? Phish Festival 8: Reducing the Environmental Impact of a Rock Concert. IHR_Mass_Gatherings_prevent.pdf. The Environmental Awakening in Sport. Sport is, for the most part, an enjoyable experience drawing billions of people to games, events, televisions, bars, and other venues to watch athletes, from children to highly talented professionals, play the sports they love. 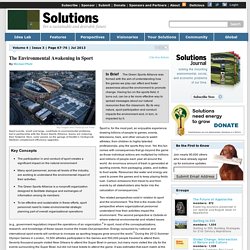 Yet, this fun comes with consequences that go beyond the game as those individual actions are multiplied by millions and millions of people each year all around the world. An enormous amount of trash is generated at sporting events, from packaging, plates, and bottles to food waste. Resources like water and energy are used to power the games and to keep playing fields lush. Carbon emissions from travel to and from events by all stakeholders also factor into the calculation of consequences.1 Two related perspectives exist in relation to sport and the environment. It is not just the national and international events that create environmental problems. The Outside-In perspective comes into play as natural environmental changes impact sport organizations. NACPAReportFINAL. Trashed: Music Festivals Are Environmental Disasters. Concerts and Mass Gathering Guidelines. Plans for Tomorrowland India in Motion, but Goa Event Still Has Miles of Planning to Go. Buzz Tomorrowland is expanding its brand dramatically as the electronic dance music industry continues to do the same and it seems earlier guesses that India would be the next stop were correct.

A report from Goacom.com, a news service in the Goa state, indicates that the company has begun putting out feelers to launch a festival. Like Us on Facebook "The event organisers have approached us and have shown interest to host the event in mid of January but the responsibility for identification of land will have to be borne by the group since they require 3.5 lakh sq. mts. of land which is difficult to identify," said Goa Tourism Minister Dilip Parulekar. What he means to say is that it's tough find space for such an event. ID&T, the promoter behind Tomorrowland, has got ambition however. A_Reading_in_the_Salon_of_Mme_Geoffrin,_1755_Small.jpg (JPEG Image, 342 × 225 pixels) Theaftermath-Glasto2015-JC12.jpg (JPEG Image, 500 × 331 pixels)

Hajj. The Hajj (/hædʒ/;[1] Arabic: حج‎ Ḥaǧǧ "pilgrimage") is an annual Islamic pilgrimage to Mecca, and a mandatory religious duty for Muslims that must be carried out at least once in their lifetime by all adult Muslims who are physically and financially capable of undertaking the journey, and can support their family during their absence.[2][3][4] It is one of the five pillars of Islam, alongside Shahadah, Salat, Zakat, and Sawm. The gathering during Hajj is considered the largest annual gathering of people in the world.[5][6] The state of being physically and financially capable of performing the Hajj is called istita'ah, and a Muslim who fulfills this condition is called a mustati.