Musculoskeletal Safety Technology. September 6, 2019 Workers across a variety of industries can develop musculoskeletal injuries that impact their ability to perform their work and daily activities. 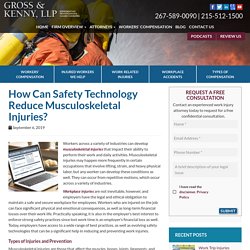 Prevent Laceration Injuries at Work. September 4, 2019 According to the Ohio Bureau of Workers’ Compensation, 30 percent of all workplace injuries involve cuts or lacerations. 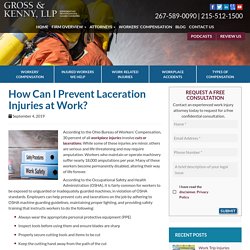 While some of these injuries are minor, others are serious and life threatening and may require amputation. Workers who maintain or operate machinery suffer nearly 18,000 amputations per year. Philadelphia Workers' Comp Lawyers. September 3, 2019 The National Institute for Occupational Safety and Health (NIOSH) has proclaimed September 3 to September 6 as Respiratory Protection Week. 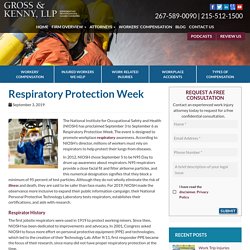 The event is designed to promote workplace respiratory awareness. Philadelphia Workers' Compensation Lawyers. August 29, 2019 The word ergonomics was not widely used until the past few decades and is frequently associated with office environments. 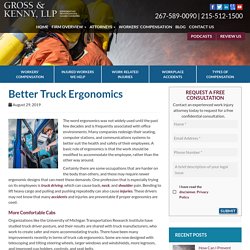 Many companies redesign their seating, computer stations, and communications systems to better suit the health and safety of their employees. A basic rule of ergonomics is that the work should be modified to accommodate the employee, rather than the other way around. Certainly there are some occupations that are harder on the body than others, and these may require newer ergonomic designs that can meet these demands. Philadelphia Workers’ Comppensation Lawyers. August 28, 2019 Workplace burnout is something a person in any profession can experience. 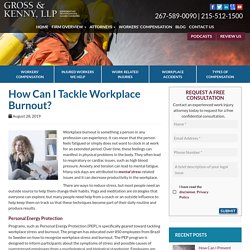 It can mean that the person feels fatigued or simply does not want to clock in at work for an extended period. Over time, these feelings can manifest in physical problems in the body. They often lead to respiratory or cardiac issues, such as high blood pressure. Anxiety and tension can lead to mental fatigue. Ways to Boost Safety in Manufacturing. August 27, 2019 Industrial workers spend hours becoming better at their trades, learning the most effective and efficient ways to perform their jobs. 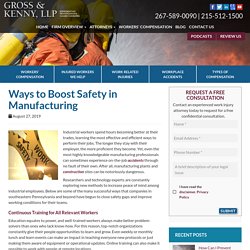 The longer they stay with their employer, the more proficient they become. Delivery Service Drivers Heat Risk. August 26, 2019 Since 2015, more than 100 employees of a national delivery service reported being admitted to the hospital for heat-related medical emergencies. 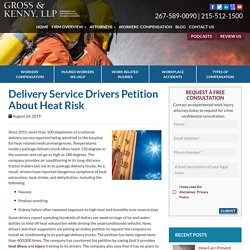 Temperatures inside a package delivery truck often reach 130 degrees in the summer and can go as high as 180 degrees. The company provides air conditioning in its long-distance tractor trailers but not in its package delivery trucks. Philadelphia Workers’ Comp Lawyers. August 22, 2019 Homeowners are aware of the importance of having safety devices, such as carbon monoxide detectors near heating systems, as part of maintaining a safe home environment. 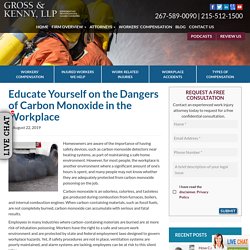 However, for most people, the workplace is another environment where a significant amount of one’s hours is spent, and many people may not know whether they are adequately protected from carbon monoxide poisoning on the job. Carbon monoxide is an odorless, colorless, and tasteless gas produced during combustion from furnaces, boilers, and internal combustion engines. When carbon-containing materials, such as fossil fuels, are not completely burned, carbon monoxide can accumulate with serious and fatal results. Employees in many industries where carbon-containing materials are burned are at more risk of inhalation poisoning. Workers Sick After Attending Conference. August 21, 2019 In July, a hotel in Atlanta temporarily closed because several guests were diagnosed with Legionnaire’s disease following a conference. 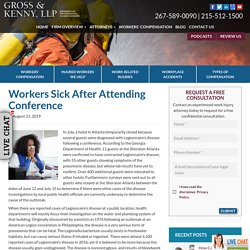 According to the Georgia Department of Health, 11 guests at the Sheraton Atlanta were confirmed to have contracted Legionnaire’s disease, with 55 other guests showing symptoms of the pneumonic disease, but whose lab results have yet to confirm. Over 400 additional guests were relocated to other hotels. New e-Tool Ranks Toxicity of Chemicals. August 19, 2019 Workers exposed to chemicals in the workplace risk negative health outcomes. 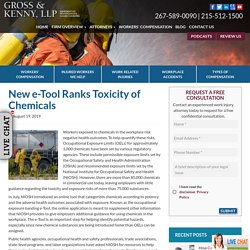 To help quantify these risks, Occupational Exposure Limits (OELs) for approximately 1,000 chemicals have been set by various regulatory agencies. These include permissible exposure limits set by the Occupational Safety and Health Administration (OSHA) and recommended exposure limits set by the National Institute for Occupational Safety and Health (NIOSH). However, there are more than 85,000 chemicals in commercial use today, leaving employers with little guidance regarding the toxicity and exposure risks of more than 75,000 substances.

In July, NIOSH introduced an online tool that categorizes chemicals according to potency and the adverse health outcomes associated with exposure. Philadelphia Workers’ Comp Lawyers. August 16, 2019 Accidents in the workplace happen all the time. They can result in injury, illness, and may even be fatal. Although there is no way to eliminate accidents, many can be prevented. One of the best ways to prevent a workplace injury is with the use of personal protective equipment. Under the Occupational Safety and Health Administration (OSHA) Act, all employers have a common-law duty to provide employees with a workplace free of known health and safety hazards that can result in injury or illness. What is Personal Protective Equipment? Emerging Technologies New Workplace Hazards. August 15, 2019 The National Institute for Occupational Safety and Health (NIOSH) is working to identify new on-the-job hazards resulting from the introduction of emerging technologies in the manufacturing industry.

Advanced technologies are expected to have a huge impact on the types of jobs that manufacturing workers do, as well as the hazards to which workers are exposed. NIOSH is concerned about the health and safety burden on workers that will result from these changes. Some of the emerging technologies now appearing in manufacturing processes include: 3D printingNanotechnologySynthetic biotechnology. Railway Company Not Liable for Fatal Accident. August 14, 2019 In January 2015, an Illinois man that worked for BNSF Railway Company lost his life while driving to work in a snowstorm when his vehicle slid into a snowplow. The man was told to report to work to help clear snow by a supervisor, as a major snowstorm was predicted. Though the man was not required to come in, he chose to do so, leaving for the 40-mile drive at 5:00 a.m. the following day. The accident occurred during heavy snowfall, and his vehicle crossed a median and crashed into the plow.

His wife later sued the railroad company, claiming that he died during the scope of his employment. Federal Employers Liability Act (FELA) The victim’s wife filed her action under the Federal Employers Liability Act (FELA), a federal law that applies to injured railroad employees. Autonomous Construction Vehicles on Rise. August 13, 2019 Construction workers face numerous dangers on the job. According to statistics, common construction accident injuries or fatalities include getting crushed between objects, being struck by falling objects, and slip and falls. Each of those activities can happen due to human error, which is one of the reasons many people are excited to learn about the increasing use of autonomous construction vehicles.

What are Work-Related Self-Driving Vehicles? Despite their many positive attributes, self-driving cars may still seem far from likely on most highways. AI and Autonomous Vehicles. Randstad Recognized for Worker Safety. August 12, 2019 For the second time, Randstad North America, the premier global staffing firm, has received the Safety Standard of Excellence mark (SSE).

The explosion occurred in the early morning and officials made estimations about what sort of material ignited the fire. Worker Tracking Clips Add Safety Features. July 23, 2019 Keeping workers safe from injury is a critical issue across industries. Now, new technology provides employers and employees the opportunity to better track dangerous situations and quickly respond when a worker is at risk. Worker tracking clips are tools that use radio frequency identification (RFID) to track devices or individuals. Decrease in Crane-Related Work Fatalities. Stronger Protections for Summer Workers Needed. July 18, 2019 The Coalition for Sensible Safeguards highlighted 11 standards needed to insure the health and safety of workers during the summer months. Workers across a variety of industries are currently at risk due to the absence or rollback of regulations. Obama Era Rule Still Remains for Miners. New Threats for Gig Economy Workers.