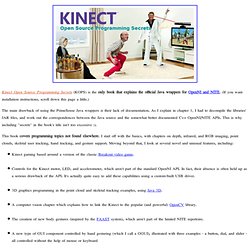 (If you want installation instructions, scroll down this page a little.) The main drawback of using the PrimeSense Java wrappers is their lack of documentation. As I explain in chapter 1, I had to decompile the libraries' JAR files, and work out the correspondences between the Java source and the somewhat better documented C++ OpenNI/NITE APIs. This is why including "secrets" in the book's title isn't too excessive :).

This book covers programming topics not found elsewhere. Early (sometimes very early) draft versions of KOPS's chapters can be downloaded from here (see the links below). If you're looking for Killer Game Programming in Java then it's here. Some Easy Ways to Get Kinect Controlling Music, Visuals on Mac and Windows. Time for a skeleton dance. 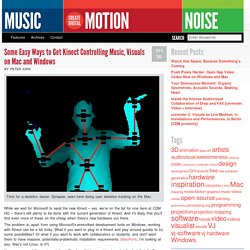 Synapse, seen here doing user skeleton tracking on the Mac. While we wait for Microsoft to send the new Kinect – yes, we’re on the list for one here at CDM HQ – there’s still plenty to be done with the current generation of Kinect. And it’s likely that you’ll find even more of these on the cheap when there’s new hardware out there.

The problem is, apart from using Microsoft’s prescribed development tools on Windows, working with Kinect can be a bit tricky. What if you want to plug in a Kinect and play around quickly to try some possibilities? Here are some of the easier solutions. With these tools, it’s possible to get a driver-free installation or something with a straightforward driver installation, and generate OSC (OpenSoundControl) messages that can be read by any visual software (or, with a little more effort, any music software). Tools for Kinect markerless motion capture » Brekel. Home. Scanner tech. 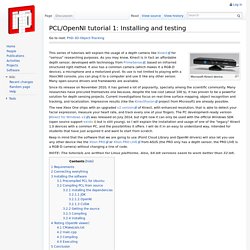 This series of tutorials will explain the usage of a depth camera like Kinect for "serious" researching purposes. As you may know, Kinect is in fact an affordable depth sensor, developed with technology from PrimeSense, based on infrarred structured light method. It also has a common camera (which makes it a RGB-D device), a microphone and a motorized pivot. Its use is not limited to playing with a Xbox360 console, you can plug it to a computer and use it like any other sensor.

Since its release on November 2010, it has gained a lot of popularity, specially among the scientific community. The new Xbox One ships with an upgraded v2 version of Kinect, with enhanced resolution, that is able to detect your facial expression, measure your heart rate, and track every one of your fingers. Making Things See. Kinect_tot. Open kinect. RGBDToolkit - DSLR + DEPTH Filmmaking.

Nosarious (Gerry Straathof) Memory Room: Yuxi, Ryan & Cris « Creation and Computation. - William Gibson We were interested in creating a project that allows a user to engage with a person in another time and place. By leaving a trace behind for others or engaging in the traces left behind for us, we become aware of the presence of the other even in their absence. We wanted to use the Kinect to track an individual in a given space and record his position after he has settled into the room.

After leaving, a projection of his image would appear in the exact spot he has just left and remain for the same length of time as he stayed in that spot before fading away. The projection acts as our virtual trace left behind in the places we have visited. Unfortunately, we were unable to achieve this ideal vision, but were able to develop the base interaction that would make this possible. Reference for Simple-OpenNI and the Kinect - Learning. Identifying People in a Scene with the Kinect - Learning.

We'll start with the sketch we wrote to draw the depth image from the Kinect in Drawing Depth with the Kinect: import SimpleOpenNI.*; SimpleOpenNI context; void setup(){ // instantiate a new context context = new SimpleOpenNI(this); // enable depth image generation context.enableDepth(); // create a window the size of the scene size(context.depthWidth(), context.depthHeight()); } void draw(){ // update the camera context.update(); // draw depth image image(context.depthImage(),0,0); } The OpenNI library does all the work for us to identify people or other moving objects in a scene. 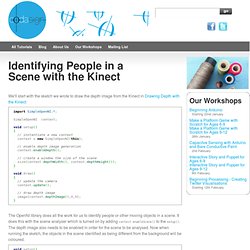 It does this with the scene analyser which is turned on by adding context.enableScene() to the setup(). Fire fluid simulation. DSLR + DEPTH Filmmaking. OpenNI - OpenNI > Downloads > OpenNI Modules. I wanted to try Kinect from the day it got released but i didn’t have the chance till yesterday. It really is an incredible little thing, you can use for many different projects. Below you can find easy steps in order to install the necessary drivers on your PC in order to have a working connection with Kinect. Also at the end you can find some additional information if you want to use it in Unity 3D, which is awesome by the way. Before we begin please note that for some drivers you will have to choose between Development and Redist editions. Kinect. Kinect-dev. Kinect Color - Detph Camera Calibration. 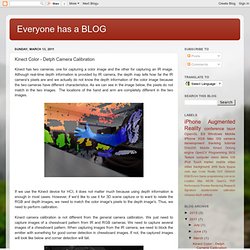 Although real-time depth information is provided by IR camera, the depth map tells how far the IR camera's pixels are and we actually do not know the depth information of the color image because the two cameras have different characteristics. As we can see in the image below, the pixels do not match in the two images. The locations of the hand and arm are completely different in the two images. If we use the Kinect device for HCI, it does not matter much because using depth information is enough in most cases. However, if we'd like to use it for 3D scene capture or to want to relate the RGB and depth images, we need to match the color image's pixels to the depth image's. Kinect. RGBDemo - Home Page. KinectSEN - Processing Kinect Resources. For a little effort you can expand the opportunities for using the Kinect three fold by downloading Processing. 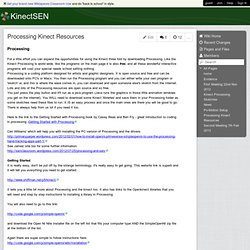 Like the Kinect Processing is world wide, like the programs on the main page it is also free, and all these wonderful interactive programs will cost your special needs school setting nothing. Processing is a coding platform designed for artists and graphic designers. It is open source and free and can be downloaded onto PC's or Macs.

Developing NUI for AIR. Kinect Physics Tutorial for Processing. How to install and use OpenNI + Microsoft Kinect SDK all together. If you are a developer of Kinect applications and you make use of Microsoft Kinect SDK, OpenNI, OpenKinect and others open source frameworks, certainly you already faced the scenario where you had to uninstall a USB driver and install another to make use of different framework. 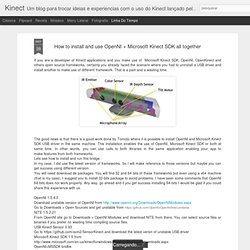 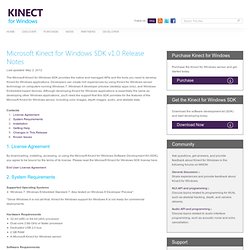 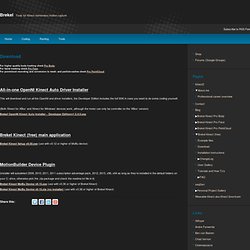 For facial tracking check Pro Face. For pointcloud recording and conversion to mesh- and particle-caches check Pro PointCloud. Kinect. Kinect Experimentsoverview of available kinect libraries and drivers In the last two years the Kinect Camera became an influential tool in a variety of situations, reaching from interactive installations to virtual user interfaces. 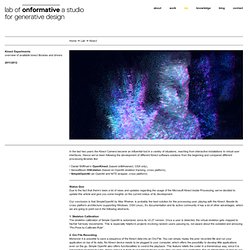 Hence we’ve been following the development of different Kinect software solutions from the beginning and compared different processing libraries like • Daniel Shiffman’s OpenKinect (based onlibfreenect, OSX only),• SenseBloom OSCeleton (based on OpenNI skeleton tracking, cross platform),• SimpleOpenNI (an OpenNI and NITE wrapper, cross platform). Status QuoDue to the fact that there’s been a lot of news and updates regarding the usage of the Microsoft Kinect inside Processing, we’ve decided to update this article and give you some insights on the current status of its development. Our conclusion is that SimpleOpenNI by Max Rheiner, is probably the best solution for the processing user, playing with the Kinect. 1. 2. 3. Jean-Christophe Naour — Interaction Design. — About I'm , a french Interaction Designer based in Seoul, South-Korea. During the past years, I've been developing interaction concepts, interfaces, programs and motion design for mobile phones, mp3 players, television, GPS, installations, etc.

My scope is continually expanding, in an effort to, ultimately, go beyond the screen. My curiosity and enthusiasm for new media encourages me everyday to push boundaries and discover new possibilities. I recently joined Samsung Electronics Headquarters, where i'm thinking of the future of display and smart TVs. — History 2012/Today : (Korea) Interaction Designer. Moullinex — Catalina music video. Kinect + .NET = NUI : Interfacce naturali facili con Kinect!!! Reconstruct your world with ReconstructMe.

Candescent.ch. Using the Kinect with Processing - Learning. Home - Kinectar. A community based site focusing on development and programming for the Microsoft Kinect 3D depth sensor. Arduino and Kinect Projects. If you've done some Arduino tinkering and wondered how you could incorporate the Kinect—or the other way around—then this book is for you. The authors of Arduino and Kinect Projects will show you how to create 10 amazing, creative projects, from simple to complex. You'll also find out how to incorporate Processing in your project design—a language very similar to the Arduino language. The ten projects are carefully designed to build on your skills at every step. Kinect to STL sketch for Processing by johngomm. Puppet Parade - Kinect Arm Tracker App by @design_io - source code now available. When Kinect was released almost two years ago we say a wave of projects/experiments that showed what could be done. One project especially stood out that took peoples imagination but also demonstrated ingenuity and innovative application not seen before.