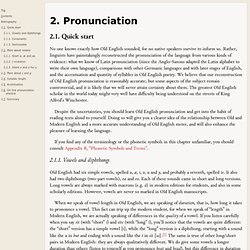 Quick start No one knows exactly how Old English sounded, for no native speakers survive to inform us. Lesson 0: Alphabet and Pronunciation. Alphabet: The earliest appearances of the Old English language are found in inscriptions written using the runic Futhoric alphabet. 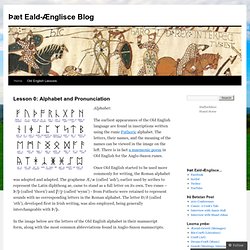 The letters, their names, and the meaning of the names can be viewed in the image on the left. There is in fact a mnemonic poem in Old English for the Anglo-Saxon runes. Once Old English started to be used more commonly for writing, the Roman alphabet was adopted and adapted. The grapheme Æ/æ (called ‘ash’), earlier used by scribes to represent the Latin diphthong ae, came to stand as a full letter on its own.