The Helpful Art Teacher: How to create and design your own vejigante mask. Before reading this article, click here for a complete list of useful art supplies (with ordering information) that you can use to build your own marvelous mask. 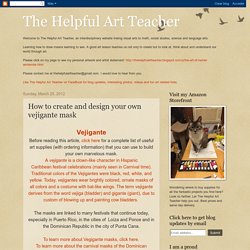 The masks are linked to many festivals that continue today, especially in Puerto Rico, in the cities of Loíza and Ponce and in the Dominican Republic in the city of Punta Cana. MASKS BY McGINNIS MIDDLE SCHOOL STUDENTS. Myths, Legends, and Superstitions of Puerto Rico. 93.02.12: Puerto Rican Folktales. The folktales of Puerto Rico reflect the culture of the people who have lived or influenced the lifestyle of those people living there, the Tainos, the Spaniards, and the Africans. 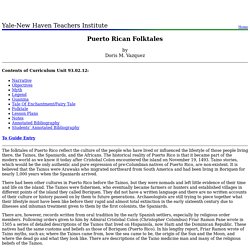 The historical reality of Puerto Rico is that it became part of the modern world as we know it today after Cristobal Colon encountered the island on November 19, 1493. Taino stories, which would be the only authentic and pure expression of pre-Columbian natives of Puerto Rico, are non-existent. It is believed that the Tainos were Arawaks who migrated northward from South America and had been living in Boriquen for nearly 1,000 years when the Spaniards arrived. Juan Bob and the Pig. Scupture by Lindsay Daen This story was taken from the following site: www.dpi.state.wi.us/oea/pdf/readrelease8.pdf Juan Bobo's Pigretold by Joseph Sobol. 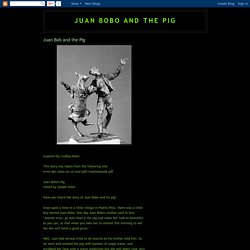 Juan Bobo – The WHEEL Council. Is page describes how stories work for prevention and provides links for storytelling information and web resources for the storyteller. 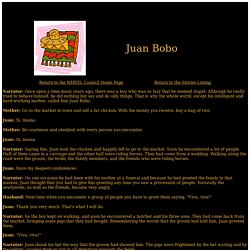 An effective storytelling prevention program includes stories, both original and from the participants' culture, as well as a means for transforming personal experiences of the participants into stories. TELL ME A STORY: Juan Bobo's pot (a folktale from Puerto Rico) Adapted By Amy Friedman And Illustrated By Jillian Gilliland Once upon a time, on the island of Puerto Rico, there lived a boy named Juan Bobo — well, his name was Juan, but he was called Juan Bobo because he was a foolish boy. 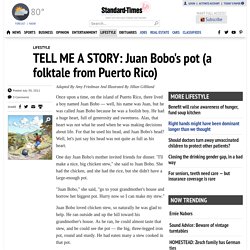 He had a huge heart, full of generosity and sweetness. Alas, that heart was not what he used when he was making decisions about life. For that he used his head, and Juan Bobo's head? Well, let's just say his head was not quite as full as his heart. One day Juan Bobo's mother invited friends for dinner. "Juan Bobo," she said, "go to your grandmother's house and borrow her biggest pot. Juan Bobo loved chicken stew, so naturally he was glad to help.

When he reached his grandmother's house, he went straight to the cupboard where she kept the pot. Home wasn't far, but that pot was heavy and the day was hot. Puerto Rican Perspectives. Lesson Summary Overview In this lesson plan drawing on material from Latino Americans, students examine Puerto Rican experiences of the United States throughout the 20th century. 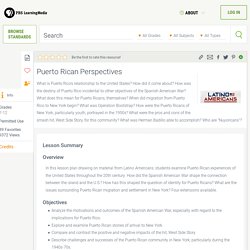 Puerto Rico Lesson Plans. Lesson Plans Social Studies Hispanic Studies Puerto Rico This unit is intended to provide school children with a fuller picture of our pluralistic society by increasing the opportunities for them to learn more about the origins of the Puerto Rican culture and folklore. 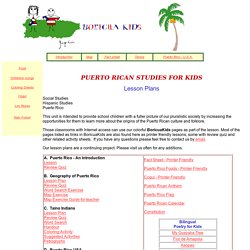 Those classrooms with Internet access can use our colorful BoricuaKids pages as part of the lesson. Most of the pages listed as links in BoricuaKids are also found here as printer friendly lessons, some with review quiz and other related activity sheets. If you have any questions please feel free to contact us by email. Our lesson plans are a continuing project. When you teach about Puerto Rico get your students attention by playing salsa music before class. Print our Lesson Plans flyer and hand to your child's teacher. 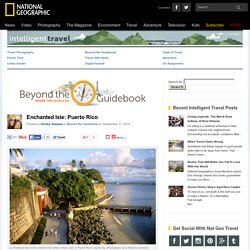 The Caribbean’s most convenient destination—especially for Americans, who don’t need a passport to get there—is also one of its most interesting. An unincorporated U.S. territory since the end of the Spanish-American War, Puerto Rico established its own constitution in 1952, beginning its complicated status as a commonwealth. And while its residents are American citizens, its culture—a unique blend of Caribbean and European—represents a melting pot all its own. Regardless of its political standing, Puerto Rico offers travelers untouched rain forest, colonial architecture, and palm-lined beaches. For a weekend or a week-long getaway, “la isla del enchanto,” as it’s affectionately called by locals, is quickly becoming a go-to destination. > Culture: Culture and traditions in Puerto Rico. Puerto Rico is a rich melting pot of cultures, although the strongest influences come from the Taino Indians, Spain and Africa. 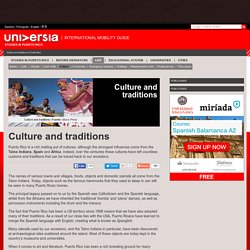 Indeed, over the centuries these cultures have left countless customs and traditions that can be traced back to our ancestors. 18 Traditional Puerto Rican Recipes. Pass your plate and fill your glass: From rich holiday foods like roasted pork shoulder (pernil) and the eggnog-like coquito cocktail, to lighter, summer-inspired dishes like Puerto Rican potato salad or asopao with shrimp and vegetables, to modern takes on dessert classics like mango vanilla cream piraguas and coquito cupcakes, we've found some of the best Puerto Rican recipes that you're sure to enjoy. 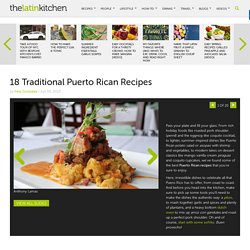 Here, irresistible dishes to celebrate all that Puero Rico has to offer, from coast to coast. The State of Puerto Rican Statehood. For a really engaging lesson on all the various non-state parts of the United States, check out this video a reader flagged for Vann’s latest piece on Puerto Rico’s primary, which Rubio won yesterday in a huge landslide (the territory, as Vann noted in another piece, “has more Republican delegates than Vermont and more Democratic delegates than four of the states that voted on Super Tuesday”): Puerto Rico Statehood. The Most Important Puerto Rican Holidays - Hispanic Culture. Do you know that Puerto Rican holidays come from a mix of religious, historic and North American events that marked the island? Yes, keep reading to understand the origins and how “Boricuas” celebrate their major holidays.

As a tropical Caribbean travel destination, Puerto Rico has it all and then some. Beautiful palm-lined beaches, some with calm warm waters lapping the golden sand, and others with huge waves and famous breaks, draw all kinds of beach seekers, from couples and families to hard-core surfers. Home to the US Forest System's only tropical rainforest and the nighttime wonders of the Bioluminescent Bay, Puerto Rico also pleasantly surprises nature lovers.

Add to this the culture and charm of historic San Juan, with its lovely colonial architecture and old forts, and the picture is almost complete. Puerto Rico is a complex island with a Spanish Caribbean culture and an obvious American twist. This is particularly visible around San Juan, with some American chain restaurants and other comforts associated with mainland USA. 1 Old San Juan (San Juan Viejo) The Top 10 Things to Do in Puerto Rico - TripAdvisor - Puerto Rico, Caribbean Attractions - Find What to Do Today, This Weekend, or in June. Puerto Rico Healthcare - Puerto Rico healthcare is somewhat similar to what you would expect in the US. The differences are mainly on how insurance companies work and what you can expect from the care of physicians. I remember that the plans I had in the US were so that I had to pay a certain amount of money before the insurance started to cover the expenses, that’s not the case here, you just have to pay a small co-pay per visit or per medication, and the same goes for emergency room visits, of course that depends on the plan you have.

The truth is that the entire process and differences can become quite frustrating at times due to long wait times and the fact that you have to pay for more things than you should. I’ll explain all that in its appropriate section. Follow the links below according to the category you are curious about, but in this page I will give you a general overview of how the whole thing works and what to generally expect. -Triple-S Salud -Humana (coming soon) -Generally, doctors care. Puerto Rico. Discovering The World Through My Son's Eyes: Schools Around The World: Puerto Rico. This post is written for inclusion of the Multicultural Blogging Carnival "Schools Around The World," hosted by The Educators' Spin On It. Public education: The Constitution of the Commonwealth of Puerto Rico grants the right to an education to all of its citizens. Therefore, public schools are free at the elementary and secondary levels.

Classes are provided in Spanish, with English being taught as a secondary language, and as a mandatory class. School structure: Concrete with windows that have aluminum blinds. A Day in the Life: Puerto Rico. Puerto Rican Celebrities: 71 Boricua Celebs We Love! (PHOTOS) Top Puerto Rican Athletes Of All Time By Salaries. Puerto Rico Sports. Five Things That Make Puerto Rico Different From the USA. Although Puerto Ricans consider themselves "American," the culture is truly distinct and separate from mainstream American culture.

The Education System in Puerto Rico. Welcome to Puerto Rico! History, Government, Geography, and Culture. The United States has a moral obligation to give Puerto Rico the right to vote — Quartz. Voting rights has become an increasingly partisan issue. In Wisconsin, new voter ID laws led to brutal lines at the polls in urban areas—a development designed, even according to Republicans themselves, to suppress Democratic turnout. In Virginia at the end of April, governor Terry McAuliffe re-enfranchised all felons who had finished parole.