Casa FOA celebra su 30 aniversario en el barrio de Retiro. Transitioning a department to TPRS/CI ...my first thoughts. So, at the end of last year, I saw a need. 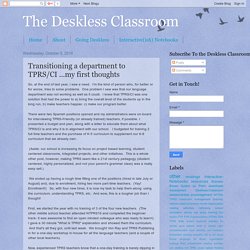 I'm the kind of person who, for better or for worse, tries to solve problems. One problem I saw was that our language department was not working as well as it could. I knew that TPRS/CI was one solution that had the power to a) bring the overall level of the students up in the long run, b) make teachers happier, c) make our program better. There were two Spanish positions opened and my administrators were on-board for interviewing TPRS-Friendly (or already trained) teachers, if possible.

I presented a budget and plan, along with a letter to educate them about what TPRS/CI is and why it is in alignment with our school. Argentina Celebrates Friendship Day - Dia Del Amigo - July 20 - Part 1. Every July 20, Argentines call their friends, email, send notes, and go out to dinner to celebrate Dia Del Amigo, or Friendship Day. 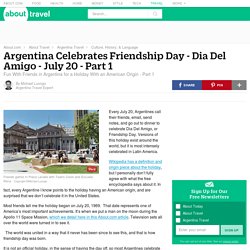 Versions of this holiday exist around the world, but it is most intensely celebrated in Latin America. Wikipedia has a definition and origin piece about the holiday, but I personally don’t fully agree with what the free encyclopedia says about it. In fact, every Argentine I know points to the holiday having an American origin, and are surprised that we don’t celebrate it in the United States. Most friends tell me the holiday began on July 20, 1969. That date represents one of America’s most important achievements.

Aventuras Nuevas. Have you seen Bear Story yet?

It is a short film from Chile that just won Best Animated Short–beating out Pixar even–at the 2016 Oscars. On its surface, it looks to be an endearing sweet story about a family of bears. However, it is so much more than that: it’s an allegory of events that happened in many families in Chile (and other southern cone countries) in the 70’s and 80’s during the Guerra Sucia. The film is very well made, and is intriguing on its own.

That said, having studied the Guerra Sucia, the film is heart wrenching. My classes read the TPRS novel about Guerra Sucia as part of our human rights unit, and the tendrils of this conflict are woven throughout so many other topics. The film is Chile’s second nominee for an Oscar, and its first winner. Some testy moments in this exchange: from Time (in English): Time article from 1973 about the coup that toppled the Allende government: I hope you find this helpful and as interesting as I have. Like this: Like Loading... Watch the Obamas dance the tango in Argentina. Día del Amigos - Friend's Day in Argentina - Vamos Spanish School. By looking at the date July 20 might not ring a bell right away that it was the day that men had landed on the moon for the very first time in 1969. 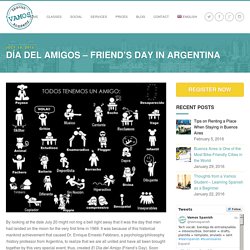 It was because of this historical mankind achievement that caused Dr. Enrique Ernesto Febbraro, a psychology/philosophy/history professor from Argentina, to realize that we are all united and have all been brought together by this very special event; thus, created El Día del Amigo (Friend’s Day). Soon after, it was also officially recognized by the government, and July 20 has been the day to celebrate friendship in Argentina ever since. While el Día del Amigo is not a public holiday, Argentines do really care about it and take this opportunity to get together with friends.

You’ll see many restaurants, bars and clubs offer special promotions that are tailored to groups. Día del Amigo: Friend’s Day in Argentina. Every July 20, restaurants and bars around the country are filled to the rafters with people celebrating a very special day. 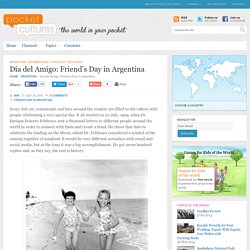 It all started on 20 July, 1969, when Dr. Enrique Ernesto Febbraro sent a thousand letters to different people around the world in order to connect with them and create a bond. He chose that date to celebrate the landing on the Moon, which Dr. Febbraro considered a symbol of the coming together of mankind. It would be very different nowadays with email and social media, but at the time it was a big accomplishment.

Best friends for ever! We Argentineans aren’t very formal and don’t usually plan social events too far in advance –except maybe for weddings-, so there’s generally a scramble the week of July 20 to book tables at restaurants, which may not always be successful as thousands of people are trying to celebrate the day with their friends. Argentina Celebrates Friendship Day - Dia Del Amigo - July 20 - Part 1.