RASPBERRY PI MODEL A+ ON SALE NOW AT $20. Source : Raspberrypi dot org “When we announced the Model B+ back in July, we said that we’d also be producing a lower-cost variant, analogous to the original Model A”, says Eben Upton. 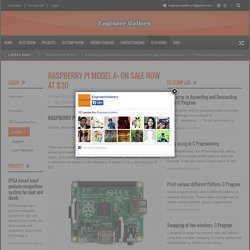 Since then, James has been beavering away, and today we’re pleased to announce the release of the Raspberry Pi Model A+ at a new low price of $20. Like the Model A, the Model A+ uses the BCM2835 application processor and has 256MB RAM, but it is significantly smaller (65mm in length, versus 86mm for the Model A), consumes less power, and inherits the many improvements that we made to the Model B+, including: More GPIO. The GPIO header has grown to 40 pins. When we announced Raspberry Pi back in 2011, the idea of producing an “ARM GNU/Linux box for $25″ seemed ambitious, so it’s pretty mind-bending to be able to knock another $5 off the cost while continuing to build it here in the UK, at the same Sony factory in South Wales we use to manufacture the Model B+. 117 Total Views 117 Views Today.

16 Raspberry Pi Model A+ Projects: Perfect Uses for the Slimmer, Cheaper Computer. The newest member of the Raspberry Pi family is here, and it's cheaper and thinner than its predecessors—though it's missing a few ports. 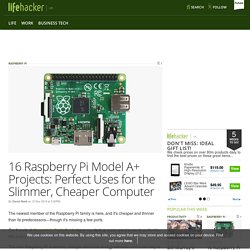 Our friends at Gizmodo's Field Guide have rounded up some great projects perfect for this puppy. The new Raspberry Pi is smaller, cheaper and more energy efficient—not a bad way to update a best-selling device. Whether you've taken the plunge on one of the new units or you want to put the original model to good use, we've collected together some of the most fun Pi-based projects on the planet for you to have a crack at. 1. Stop motion camera There are many ways to make use of the optional Pi camera module, and one of them is to set up a stop-motion-capable rig. 2. Extend the reach of your home Wi-Fi network and get connectivity into the dark zones of your home (or office) with the help of a Raspberry Pi—you could even set up a separate network for guests. 3. 4. 5. Want to know who's been in your home office while you've been out? 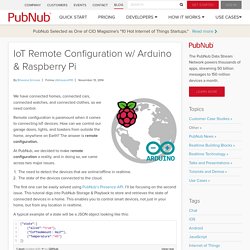 Remote configuration is paramount when it comes to connecting IoT devices. How can we control our garage doors, lights, and toasters from outside the home, anywhere on Earth? The answer is remote configuration. At PubNub, we decided to make remote configuration a reality, and in doing so, we came across two major issues. The need to detect the devices that are online/offline in realtime.The state of the devices connected to the cloud. The first one can be easily solved using PubNub’s Presence API. A typical example of a state will be a JSON object looking like this: To get remote configuration up and running, here’s the overall procedure. Scenario 1: Raspberry Pi Remote Configuration. Raspberry PI. 50 best Linux distros: find the best one for you. Introduction Note: Our 10 best Linux distros round-up has been fully updated. 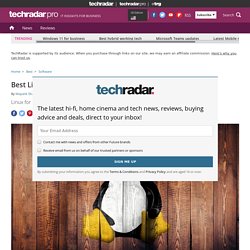 This feature was first published in May 2012. Choice and flexibility are the hallmarks of a Linux distribution, and by extension the Linux ecosystem. With the proprietary Windows and OS X, you're stuck with the system as designed and can't make changes no matter how unpleasant you may find the experience. Linux distributions are free of such limitations. Each distro has the Linux kernel at its core, but builds on top of that with its own selection of other components, depending on the target audience of the distro.