Deakin University Library. Melbourne on track to be most populated city as people flock to Victoria: Australian Bureau of Statistics. Updated Australians are flocking to live in Victoria in record numbers, with the latest official population forecasts showing Melbourne is on track to overtake Sydney as Australia's biggest city by 2056. 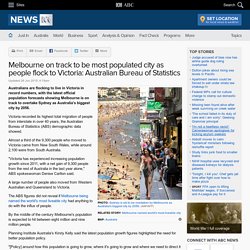 Victoria recorded its highest total migration of people from interstate in over 40 years, the Australian Bureau of Statistics (ABS) demographic data showed. Almost a third of the 9,300 people who moved to Victoria came from New South Wales, while around 2,100 were from South Australia. "Victoria has experienced increasing population growth since 2011, with a net gain of 9,300 people from the rest of Australia in the last year alone," ABS spokeswoman Denise Carlton said. A large number of people also moved from Western Australian and Queensland to Victoria. The ABS figures did not reveal if Melbourne being named the world's most liveable city had anything to do with the influx of people. The ABS data showed Western Australia recorded it first negative interstate migration rate since 2002. 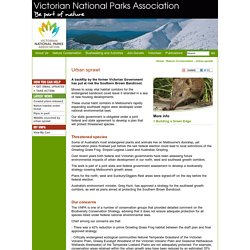 Over recent years both federal and Victorian governments have been assessing future environmental impacts of urban development in our north, west and southeast growth corridors. The work is part of a joint state and federal government assessment to develop a biodiversity strategy covering Melbourne's growth areas. Plans for the north, west and Sunbury/Diggers Rest areas were signed-off on the day before the federal election. Greening the West: Tackling Melbourne's Health Ills and Water Shortage with One Program. 18 August 2014 In order to tackle the recent Victorian drought, councils around the state implemented various water saving programs and restrictions on water usage. 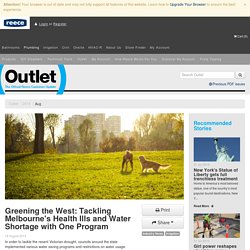 The majority proved successful, but as suburbs continued to save water on the whole, there was a side effect that had some unexpected repercussions. Due to a reduction in irrigation, public spaces such as parks suffered most from the redirection and conservation of water. Lacking the water to nourish them, these once lush public spaces soon turned brown and barren. And as temperatures soared over the unusually warm summers, people were less inclined to utilise them – or even care if they were thriving or not. Environmental groups fear 20 per cent of open space will be lost in NSW. Wayne Olling at the Shanes Park Woodland, a site set aside by the State Government for protection and part of which is now under threat of a new highway. 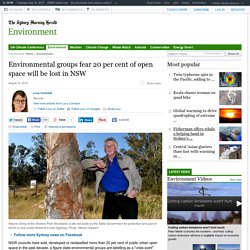 Photo: Steven Siewert Follow more Sydney news on Facebook NSW councils have sold, developed or reclassified more than 20 per cent of public urban open space in the past decade​, a figure state environmental groups are labelling as a "crisis point". ​ The Georges River Corridor, the Cumberland Conservation Corridor, the Shanes Park Woodlands and bushland at the site of the new hospital at Frenchs Forest are some of the 39 open spaces under threat, says the Total Environment Centre.​ Urban open space includes parks, playing fields and bushland reserves. Tony Abbott is ignoring problems of cities: traffic, urban sprawl. It’s not getting any easier living in our major cities. 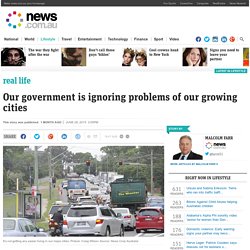 Picture: Craig Wilson Source: News Corp Australia THE 15 million Australians living in our mainland capital cities have been left out of federal government policy at a time of massive shifts in population and employment. This is the year in which the Coalition had promised a national livability index to rate major cities on such matters as traffic congestion and neighbourhood safety. But there is no index, and specific policies for cities have vanished from the Coalition’s priorities. This is despite big demographic and economic shifts which will see Sydney’s population soon reach five million and Melbourne become Australia’s largest city by 2051.

Melbourne’s foodbowl threatened by urban sprawl. Melbourne relies on its city-fringe farmland to feed it, with 40-50% of Victoria’s vegetable production happening right on the city’s doorstep, new research shows. 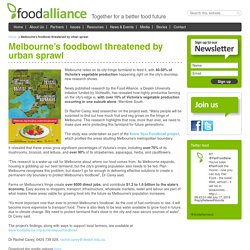 Newly published research by the Food Alliance, a Deakin University initiative funded by VicHealth, has revealed how highly productive farming on the city’s edge is, with over 10% of Victoria’s vegetable production occurring in one suburb alone, Werribee South. Dr Rachel Carey, lead researcher on the project said, “Many people will be surprised to find out how much fruit and veg grows on the fringe of Melbourne. This research highlights that now, more than ever, we need to make sure we’re protecting this farmland for future generations. Total Environment Centre - Total Environment Centre. 16 Dec 2013: Report by mike ives At street level, 313@somerset looks like any other glittering mall in downtown Singapore. 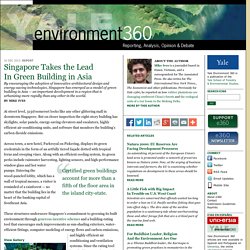 But on closer inspection the eight-story building has skylights, solar panels, energy-saving elevators and escalators, highly efficient air-conditioning units, and software that monitors the building’s carbon dioxide emissions. What is green space worth? Recent patterns of residential development in Australian cities are threatening to overwhelm green space in our urban cores. 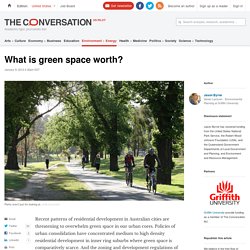 Environment.nationalgeographic.com. The promise of jobs and prosperity, among other factors, pulls people to cities. 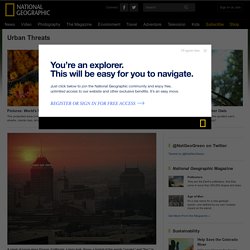 Half of the global population already lives in cities, and by 2050 two-thirds of the world's people are expected to live in urban areas. But in cities two of the most pressing problems facing the world today also come together: poverty and environmental degradation. Poor air and water quality, insufficient water availability, waste-disposal problems, and high energy consumption are exacerbated by the increasing population density and demands of urban environments. Strong city planning will be essential in managing these and other difficulties as the world's urban areas swell. Threats Solutions.