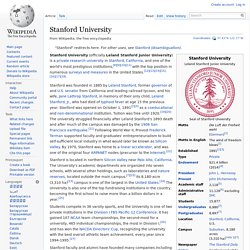 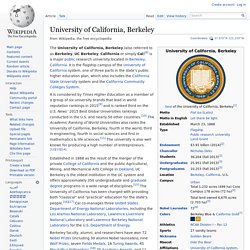 It is the flagship campus of the University of California system, one of three parts in the state's public higher education plan, which also includes the California State University system and the California Community Colleges System. It is considered by Times Higher Education as a member of a group of six university brands that lead in world reputation rankings in 2015[9] and is ranked third on the U.S. News' 2015 Best Global Universities rankings conducted in the U.S. and nearly 50 other countries.[10] The Academic Ranking of World Universities also ranks the University of California, Berkeley, fourth in the world, third in engineering, fourth in social sciences and first in mathematics & life sciences.[11] The university is also well known for producing a high number of entrepreneurs.[12][13][14] About. From hikers to hunters, birders to beach-combers, the world is filled with naturalists, and many of us record what we find. 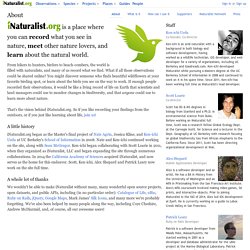 What if all those observations could be shared online? You might discover someone who finds beautiful wildflowers at your favorite birding spot, or learn about the birds you see on the way to work. If enough people recorded their observations, it would be like a living record of life on Earth that scientists and land managers could use to monitor changes in biodiversity, and that anyone could use to learn more about nature. That's the vision behind iNaturalist.org. So if you like recording your findings from the outdoors, or if you just like learning about life, join us! 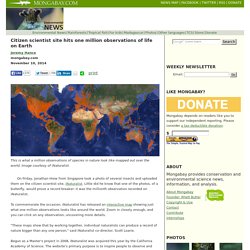 Image courtesy of iNaturalist. On Friday, Jonathan Hiew from Singapore took a photo of several insects and uploaded them on the citizen scientist site, iNaturalist. Little did he know that one of the photos, of a butterfly, would prove a record breaker: it was the millionth observation recorded on iNaturalist. To commemorate the occasion, iNaturalist has released an interactive map showing just what one million observations looks like around the world. Zoom in closely enough, and you can click on any observation, uncovering more details. Recruit Media Technology Lab (Recruit MTL) 終止服務的虫判定器與生生不息的紅姬緣椿象 - Jas9 Taipei.設計誌. 兩三年前曾經特地寫篇介紹的虫判定器，居然在上個月宣佈終止服務了。 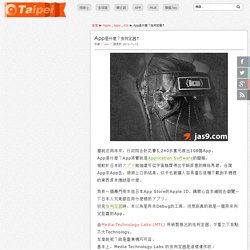 Project Noah. What kind of beetle? This app knows. The Project Noah app asks people to upload photos, GPS coordinates and other anecdotal info about wildlife they see. 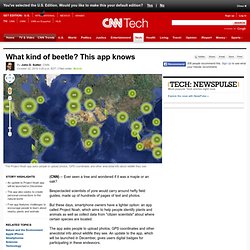 An update to Project Noah app will be launched in December The app also seeks to create personal connections to the natural world Free app features challenges to encourage people to learn about nearby plants and animals (CNN) -- Ever seen a tree and wondered if it was a maple or an oak? Bespectacled scientists of yore would carry around hefty field guides, made up of hundreds of pages of text and photos.

But these days, smartphone owners have a lighter option: an app called Project Noah, which aims to help people identify plants and animals as well as collect data from "citizen scientists" about where certain species are located. The app asks people to upload photos, GPS coordinates and other anecdotal info about wildlife they see. About. Project Noah is an award-winning software platform designed to help people reconnect with the natural world. 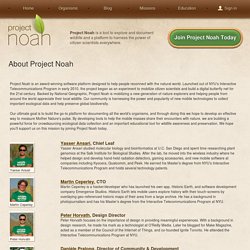 Launched out of NYU’s Interactive Telecommunications Program in early 2010, the project began as an experiment to mobilize citizen scientists and build a digital butterfly net for the 21st century. Backed by National Geographic, Project Noah is mobilizing a new generation of nature explorers and helping people from around the world appreciate their local wildlife. Our community is harnessing the power and popularity of new mobile technologies to collect important ecological data and help preserve global biodiversity. Our ultimate goal is to build the go-to platform for documenting all the world’s organisms, and through doing this we hope to develop an effective way to measure Mother Nature’s pulse. Yasser Ansari, Chief Leaf Yasser Ansari studied molecular biology and bioinformatics at U.C. 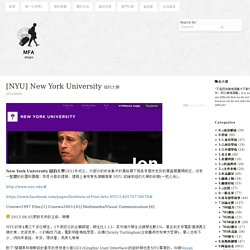 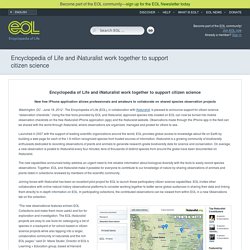 Using the free tools provided by EOL and iNaturalist, approved species lists created on EOL can now be turned into mobile observation checklists on the free iNaturalist iPhone application (app) and the iNaturalist website. Observations made through the iPhone app in the field can be shared with the world through iNaturalist, where observations are organized, managed and posted for others to see. The new capabilities announced today address an urgent need to link reliable information about biological diversity with the tools to easily record species observations. Joining forces with iNaturalist has been an excellent pilot project for EOL to launch these participatory citizen science capabilities. Dr. iNaturalist. iNaturalist is citizen science project and online social network of naturalists, citizen scientists, and biologists built on the concept of mapping and sharing observations of biodiversity across the globe.[2] Observations may be added via the website or from a mobile application.[3][4] The observations provide valuable open data to a variety of scientific research projects, museums, botanic gardens, parks, and other organizations.[5][6] .[7] Users of iNaturalist have contributed over one million observations since its founding in 2008.[8] History[edit] iNaturalist.org began in 2008 as a UC Berkeley School of Information Master's final project of Nate Agrin, Jessica Kline, and Ken-ichi Ueda.[1] Nate Agrin and Ken-ichi Ueda continued work on the site with Sean McGregor, a web developer.

In 2011, Ueda began collaboration with Scott Loarie, a research fellow at Stanford University and lecturer at UC Berkeley. Ueda and Loarie are the current co-directors of iNaturalist.org. See also[edit] Crowdsourcing. Crowdsourcing is a sourcing model in which individuals or organizations obtain goods and services. These services include ideas and finances, from a large, relatively open and often rapidly-evolving group of internet users; it divides work between participants to achieve a cumulative result. The word crowdsourcing itself is a portmanteau of crowd and outsourcing, and was coined in 2005.[1][2][3][4] As a mode of sourcing, crowdsourcing existed prior to the digital age (i.e. "offline").[5] There are major differences between crowdsourcing and outsourcing. Cmr-journal. Wired 14.06: The Rise of Crowdsourcing. Remember outsourcing? Sending jobs to India and China is so 2003.