Pluto colder than we thought. Pluto globe you can buy. The anaglyph. Pluto. Methane 'Sand' Something weird is at work on the cold, dark plains of Pluto, where hundreds of regularly spaced ridges look a bit like an alien thumbprint pressed into extraterrestrial ice. 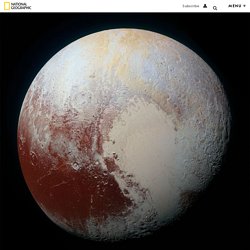 Today, though, researchers report in the journal Science that the strange landscape is actually a dune field crafted from methane “sand.” The observation is startling, given that scientists thought Pluto’s tenuous atmosphere wasn’t necessarily robust enough to support the formation of dunes, which by most definitions are sculpted by wind. “Dunes on Pluto, or any other body, tell us there is a significant enough atmosphere to move materials around, and that there are particles to move—in this case, frozen methane sand,” says study coauthor Jani Radebaugh of Brigham Young University, who studies wind-sculpted landforms throughout the solar system and on Earth.

Is Pluto a Planet Again? Pluto is making headlines again. 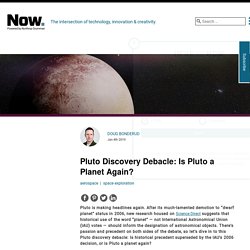 After its much-lamented demotion to “dwarf planet” status in 2006, new research housed on Science Direct suggests that historical use of the word “planet” — not International Astronomical Union (IAU) votes — should inform the designation of astronomical objects. There’s passion and precedent on both sides of the debate, so let’s dive in to this Pluto discovery debacle: Is historical precedent superseded by the IAU’s 2006 decision, or is Pluto a planet again? Pluto Primer As noted by Astronomy.com, Pluto was discovered on Feb. 18th, 1930, by Clyde W. Tombaugh at the Lowell Observatory. Methane sand. Sonnet (not by me) Richard St. 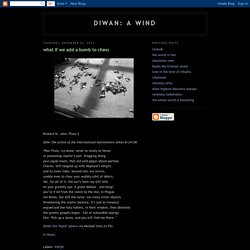 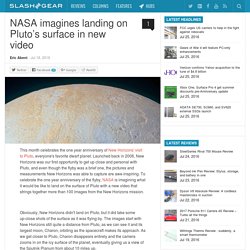 Launched back in 2006, New Horizons was our first opportunity to get up close and personal with Pluto, and even though the flyby was a brief one, the pictures and measurements New Horizons was able to capture are awe-inspiring. To celebrate the one year anniversary of the flyby, NASA is imagining what it would be like to land on the surface of Pluto with a new video that strings together more than 100 images from the New Horizons mission. Obviously, New Horizons didn't land on Pluto, but it did take some up-close shots of the surface as it was flying by.

The images start with New Horizons still quite a distance from Pluto, as we can see it and its largest moon, Charon, orbiting as the spacecraft makes its approach. It's a cool video to be sure, and it offers us a look at Pluto that wasn't possible before last year. Pluto flyover video.

"Altogether, the craft has been able to photograph about half of Pluto’s surface in reasonable detail, recording features as little as 1km across. What the other half looks like will remain a mystery for a long time." --The Economist 08/01/15 – graywyvern 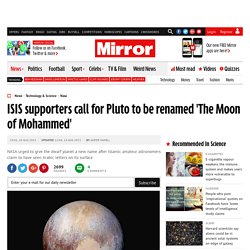 On a website extremists commonly use to post propaganda, religious instruction, training manuals and videos of sickening acts of violence, one Islamist called upon NASA to change the name of the dwarf planet. In a post seen by more than 5,000 people, a supporter of the so-called Islamic State said the famous "heart" on the surface of Pluto was actually a message written in the style of the 'I heart New York' t-shirts.

The unnamed writer said two Arabic words could be spotted on either side of the heart. "When we look carefully at this photo of Pluto, we will notice an Arabic sentence which means Allah loves Mohammed," the ISIS propagandist claimed. "Since the heart is so big, that means 'so much love or 'God loves Mohammed so much'. Giant gastropod. NASA recently unveiled curious-looking high-resolution images of the Sputnik Planum region of the dwarf planet Pluto, sent back to Earth by the New Horizons space probe during its flyby of Pluto last July. 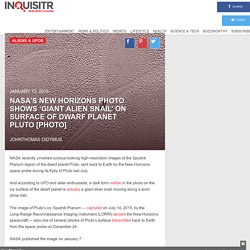 And according to UFO and alien enthusiasts, a dark form visible in the photo on the icy surface of the dwarf planet is actually a giant alien snail moving along a worn slime trail. The image of Pluto’s icy Sputnik Planum — captured on July 14, 2015, by the Long-Range Reconnaissance Imaging instrument (LORRI) aboard the New Horizons spacecraft — was one of several photos of Pluto’s surface transmitted back to Earth from the space probe on December 24. NASA published the image on January 7. The dark form or object shown in the image immediately caught the attention of UFO and alien enthusiasts, sparking a debate that led to the predictable conclusion that the photo could be evidence of alien life on Pluto.

<img src=" “Something strange going on down there!” The ices. Researchers in an Arizona ice lab spend long hours making crystal-clear ice from mixes of methane, nitrogen and even carbon monoxide — and now, with data from the New Horizons mission to Pluto arriving soon, the lab's time has come. 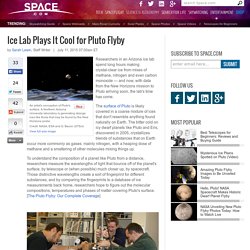 The surface of Pluto is likely covered in a coarse mixture of ices that don't resemble anything found naturally on Earth. The bitter cold on icy dwarf planets like Pluto and Eris, discovered in 2005, crystallizes blends of substances that on Earth occur more commonly as gases: mainly nitrogen, with a heaping dose of methane and a smattering of other molecules mixing things up. Where does the nitrogen come from? Backlit by the sun, Pluto’s atmosphere rings its silhouette like a luminous halo in this image taken by NASA’s New Horizons spacecraft. 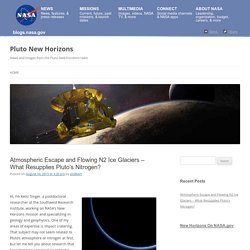 Image Credit: NASA/JHUAPL/SwRI Hi, I’m Kelsi Singer, a postdoctoral researcher at the Southwest Research Institute, working on NASA’s New Horizons mission and specializing in geology and geophysics. One of my areas of expertise is impact cratering. That subject may not seem related to Pluto’s atmosphere or nitrogen at first, but let me tell you about research that New Horizons principal investigator Alan Stern and I conducted and published as a prediction paper before the flyby of Pluto. Artist's conception 5. Neon seas, 1974. Artist's conception 4. Mi-Go, the Fungi from Yuggoth by Cloister on DeviantArt. Notes from Yuggoth part 6 (mysterious dark blotches and lesser satellites) Mi-Go by the King Ov Rats (www.deviantart.com) It is going to take NASA weeks to months to receive all of the data from New Horizons and to process, analyze and interpret the received information. 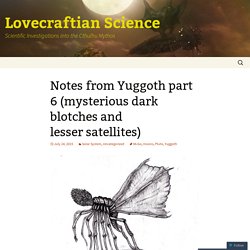 I have a print of this framed on my desk. – graywyvern

Walking on Pluto. [1309.0841] Pluto's Atmosphere Does Not Collapse. Winter on pluto. Great job everyone on braving our record cold temperatures this week! 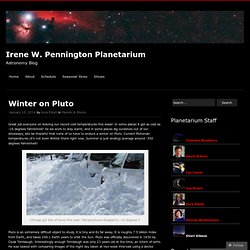 In some places it got as cold as -16 degrees Fahrenheit! As we work to stay warm, and in some places dig ourselves out of our driveways, lets be thankful that none of us have to endure a winter on Pluto. Current Plutonian temperatures (it’s not even Winter there right now, Summer is just ending) average around -350 degrees Fahrenheit! Chicago got lots of snow this year! Temperatures dropped to -16 degrees F. Pluto is an extremely difficult object to study, it is tiny and its far away. Tombaugh compared these two plates with the blink comparator and saw Pluto moving relative to the background stars. We still know very little about Pluto today, our best images are fuzzy, but they can tell us how Pluto changes appearance over time. Gossamer by Stephen Baxter. The flitter bucked. Lvov looked up from her data desk, startled.

Beyond the flitter’s translucent hull, the wormhole was flooded with sheets of blue-white light which raced towards and past the flitter, giving Lvov the impression of huge, uncontrolled speed. “We’ve got a problem,” Cobh said. The pilot bent over her own data desk, a frown creasing her thin face. Lvov had been listening to her data desk’s synthesized murmur on temperature inversion layers in nitrogen atmospheres; now she tapped the desk to shut it off.

She clung to her desk, her knuckles whitening, wondering if she ought to feel scared. Cobh sighed and pushed her data desk away; it floated before her. Factoid. Pluto turning. The New Horizons spacecraft may still be several years away from its flyby of the outermost ex-planet, but the Hubble Space Telescope is meanwhile grabbing glimpses of the frozen world at the edge of our solar system. The video above is composed of hundreds of individual images of Pluto, assembled over the course of four years by the Southwest Research Center in Boulder, CO. It shows the planet’s rotation and differences in coloration around its surface. The most recent images point at changing surface colorations as well, hinting at active atmospheric processes and possibly helping scientists on the New Horizons team target key areas to image in 2015. Imagining pluto. Pluto is classified as the second-largest dwarf planet in our Solar system.

However, recent studies have suggested speculation by astronomers that Pluto, is in fact part of the Kuiper belt. This is found in the outermost region of the solar system which is mainly composed of asteroids. This heavenly body who takes its name after the Roman and Greek god of the underworld has a distance of 2.67 billion miles away from Earth, therefore its surface is relatively unknown. However, it is believed that the smallest and coldest planet is said to be composed of 70% rock and 30% ice.

Pluto, like Earth and Mars also have polar ice caps. Because of Pluto’s relatively small size, even smaller than the Earth’s moon and appears like a star to the naked eye, some astronomers believe that Pluto had been one of Neptune’s moon which in some way through time has escaped from Neptune’s orbit. Map of pluto. PIA00826: Map of Pluto's Surface Date: 30 Jun 1994 This is the first image-based surface map of the solar system's most remote planet, Pluto.

Compare: (after the flyby on July 14th) – graywyvern

This map was assembled by computer image processing software from four separate images of Pluto's disk taken with the European Space Agency's (ESA) Faint Object Camera (FOC) aboard NASA's Hubble Space Telescope. Hubble imaged nearly the entire surface, as Pluto rotated on its axis in late June and early July 1994. The map, which covers 85% of the planet's surface, confirms that Pluto has a dark equatorial belt and bright polar caps, as inferred from ground-based light curves obtained during the mutual eclipses that occurred between Pluto and its satellite Charon in the late 1980s. The brightness variations in this map may be due to topographic features such as basins and fresh impact craters. Image reconstruction techniques smooth out the coarse pixels in the four raw images to reveal major regions where the surface is either bright or dark. Pluto in fiction. Artist's concept of Pluto Pluto has been featured in many instances of science fiction and popular culture.

Initially classified as a planet upon its discovery in 1930, Pluto has also received considerable publicity following a 2006 definition of planet decree, which dubbed it a dwarf planet. Literature[edit] Comics[edit] Pluto today.