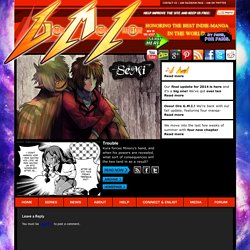 We've got over ten manga chapters for the Holiday Season! Let's jump right in! First off, let's welcome our newest addition to the BURST GALAXY family; 1H3RO's Infinite the Journey! Join the farmboy-turned-warrior Keio as he is flung into a conflict spanning the realms of Xoria while fighting to protect the only family he's ever known. Enlisted into the leagues of heroes and legends, will Keio be capable of mastering the strength within through his Soul Release technique and step up to meet his coming fate? Also in the BURST GALAXY this month, Chapter 8 of Ogawa Burukku's 2013-Award Winning series FaLLEN! Matsuyama Takeshi's Okamirai also returns with a quadruple-chapter-update! Concluding the BURST updates is Chapter 4 of J.M. SHINE GALAXY concludes the new chapter updates with two new Magnolia Online chapters from Reon Merryweather and Power J!

Over $5000 and the title of "Best Original Manga Webcomic" are on the line! Mare Internum. Order of Tales. The Curious Saga of No-One. There is that awkward time in a relationship when you learn new things about each other, and not all of the discoveries are welcome. 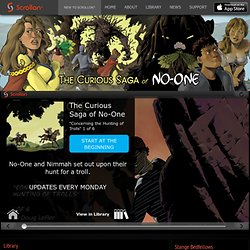 The episoidics for The Curious Saga of No-One find Nimmah and her wizard in that situation. Can they resolve their personal differences to focus on the greater task of hunting trolls? If you are enjoying the story and have access to an iPhone or iPad, please download the {*style:<a href=' app{*style:</b>*}{*style:</a>*} so you can experience {*style:<a href=' Curious Saga of No-One{*style:</b>*}{*style:</a>*} in its native programming environment. For Android and Windows users we will continue to make your online reading as enjoyable as possible until apps are also available for your devices. Mx0 6 - Read Mx0 6 Online. Miamaska - C06P33. Namesake. Winters in Lavelle. Read Semi Comics - Chapter 1: Chapter One - Page Comic Cover. The Bean. What Birds Know. Seed. The Tale of Aeria: Webcomic. Plume. MegaTokyo - relax, we understand j00.

Earthsong - An Online Graphic Novel by Crystal Yates. The Chronicles of Loth. Not A Villain: A reformed hacker in a virtual Reality. FaLLEN - A Weekly Webcomic By Ogawa Burukku. Comitia 109 Posted on August 15 , 2014 For those of you living in or around Tokyo, I am flying in this weekend for Comitia 109 and I will be at table Na05a, or な05a. 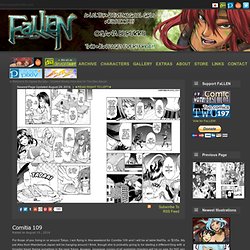 My pal Alex from Wanderlust Japan will be hanging around I think, though she is probably going to be starting a different blog with a broader travel theme sometime in the near future. Anyway, Japanese copies of all available chapters will be on sale for 500 yen a pop, though Chapter 6 and 7 will be printed as a single book for the price of one. Very limited printing for these since I have a graphic novel coming out soon, but I know some people will be wanting a copy to complete their collection. Home Sweet Home! I've moved into my new home!! Hello, Maris and Vesta! Posted on August 8 , 2014 Hurray hurray! Yay! Posted on August 3 , 2014 Got some good news! Flail Flail Flail Posted on July 25 , 2014 Still behind on emails/messages/comments/etc, but here are two more pages! So Sleepy... Posted on July 18 , 2014 Posted on July 11 , 2014. Blindsprings » A Webcomic by Kadi Fedoruk. The Meek.