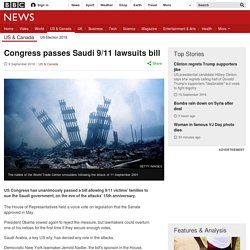 Current Composition of Congress. BBC Radio 4 - Archive on 4, The Art of Filibustering. Republicans begin to thaw on Obama's Supreme Court pick. Image copyright Reuters Several Republican senators have taken steps to consider Merrick Garland's nomination to the Supreme Court despite calls from their leadership to leave the selection to the next president. 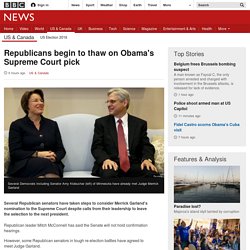 Republican leader Mitch McConnell has said the Senate will not hold confirmation hearings. Battle Lines Drawn in Congress Over Justice Antonin Scalia’s Successor. CIA report: A tale of competing truths. With the Senate report on US interrogation of al-Qaeda suspects now in the public record, debate has shifted from hypothetical to the concrete. 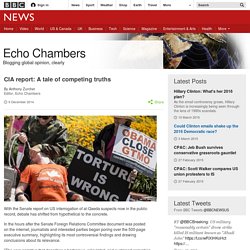 In the hours after the Senate Foreign Relations Committee document was posted on the internet, journalists and interested parties began poring over the 500-page executive summary, highlighting its most controversial findings and drawing conclusions about its relevance. "The core narrative that describes a barbarous, calculated, and sustained corruption of both our national values and our most fundamental moral principles is simple," writes Kevin Drum of Mother Jones. "We tortured prisoners, and then we lied about it. That's it. " Massive spending bill and tax plan passes US Congress. The unprecedented partisanship of Congress, explained. When he was first running for president in 2008, Barack Obama frequently suggested that he would dismantle the partisanship that had jammed the gears of official Washington. 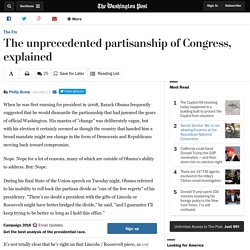 His mantra of "change" was deliberately vague, but with his election it certainly seemed as though the country that handed him a broad mandate might see change in the form of Democrats and Republicans moving back toward compromise. Nope. Nope for a lot of reasons, many of which are outside of Obama's ability to address. But: Nope. How Congress became so partisan, in 4 charts. As we've noted before, the ideological middle is dead in Congress. 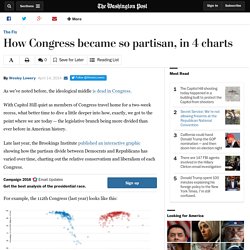 With Capitol Hill quiet as members of Congress travel home for a two-week recess, what better time to dive a little deeper into how, exactly, we got to the point where we are today -- the legislative branch being more divided than ever before in American history. Late last year, the Brookings Institute published an interactive graphic showing how the partisan divide between Democrats and Republicans has varied over time, charting out the relative conservatism and liberalism of each Congress. Campaign 2016 Email Updates. Benghazi: Explained. America’s most gerrymandered congressional districts. Crimes against geography. 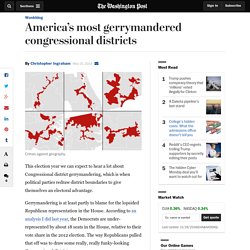 This election year we can expect to hear a lot about Congressional district gerrymandering, which is when political parties redraw district boundaries to give themselves an electoral advantage. Gerrymandering is at least partly to blame for the lopsided Republican representation in the House. Paul Ryan elected Speaker of the House, replacing John Boehner. "I am not interested in laying blame," he added. 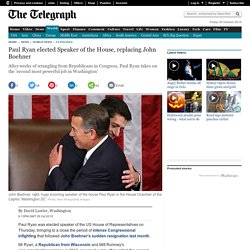 "We are not settling scores, we are wiping the slate clean. " Mr Ryan, who is just 45 and was often tipped as a future president, never sought the office of speaker, which typically marks the culmination of a long congressional career rather than a stepping stone to higher office. Republican U.S. Presidential candidate Romney introduces U.S. Congressman Ryan as his vice-presidential running mate Photo: REUTERS. Congress clears legislation to avert a shutdown.

By a 78-20 vote, the Senate approved a short-term funding bill that would keep the government open past a midnight deadline. 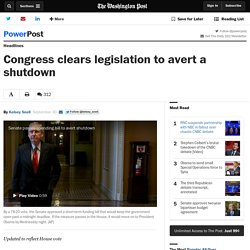 If the measure passes in the House, it would move on to President Obama by Wednesday night. (AP) Updated to reflect House vote Congress on Wednesday approved a short-term spending bill that will prevent a government shutdown and fund federal agencies through mid-December. House passes bills to defund Planned Parenthood amid shutdown threats. Days away from a politically disastrous government shutdown, the House of Representatives passed two abortion-related bills in a move by party leadership to quell conservative hardliners who have threatened to defund Planned Parenthood. 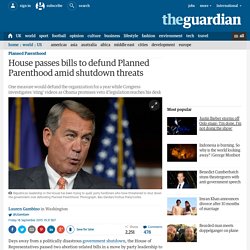 The House voted, largely along party lines, to send the bills to the Senate, where Democrats there have enough votes to block the measures. President Barack Obama, a strong supporter of the women’s health program, has threatened to veto the legislation if it reaches his desk. Yet emboldened by a series of undercover videos that allege Planned Parenthood profited from the sale of aborted fetal body parts, a claim the organization vehemently denies, Republicans are prepared to battle ahead – some vowing to do so at any cost.

One measure would strip federal funds from Planned Parenthood for one year while Congress investigates the videos’ unsubstantiated claims. Congress passes NSA surveillance reform in vindication for Snowden. The US Senate on Tuesday passed a bill to end the bulk collection of millions of Americans’ phone records, ushering in the country’s most significant surveillance reform since 1978 two years after NSA whistleblower Edward Snowden’s revelations to the Guardian. 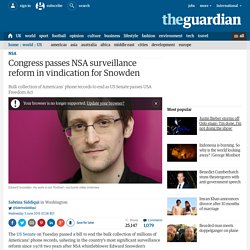 USA Freedom Act fails as senators reject bill to scrap NSA bulk collection. Rand Paul concludes 10-hour 'filibuster' in bid to derail Patriot Act extension – live. Paul, the privacy hawk and GOP presidential candidate, wants the wholesale expiration of Section 215 of the 2001 Patriot Act, the controversial surveillance provision that the NSA uses to justify the ongoing bulk collection of Americans’ phone records. (A federal appeals court earlier this month ruled that the provision does not in fact authorize the NSA program.) If absolutely nothing happens, the whole Patriot Act provision expires on 1 June 1. Functionally, however, the clock is even more severe than that. Loretta Lynch confirmed by Senate as attorney general. Loretta E. Lynch’s long wait to become U.S. attorney general ended Thursday, with the Senate voting 56 to 43 to confirm the veteran New York prosecutor five months after President Obama submitted her nomination to Congress. Lynch is expected to be sworn in as the nation’s 83rd attorney general Monday, according to Justice Department officials not authorized to comment publicly.

Obama said in a statement that “America will be better off” with Lynch in charge of the Justice Department. Iran nuclear deal: Can the US Congress sabotage it? - BBC News. White House officials are pleased with a new framework with Iran. Republicans in Congress, however, remain sceptical. Officials from Iran and six other countries, the US, Britain, France, Russia, China and Germany, have agreed on a framework for ways to contain Iran's nuclear programme. It provides guidelines for a more lasting agreement, one that is supposed to be reached by 30 June.

Mr Obama hailed the framework as "historic". If the deal goes through in the summer, it will be a landmark foreign policy achievement. US avoids homeland security shutdown as House passes bill - BBC News. The US Homeland Security Department has avoided a partial shutdown as Congress passed a one-week funding extension, hours before a midnight deadline. The House of Representatives voted 357-60 in favour of the short-term bill after it had been passed in the Senate. President Barack Obama, who said he would back a short-term deal to avert a shutdown, signed it shortly afterwards. It ensures the department's 250,000 employees will be paid while a longer-term funding agreement is discussed. The two-thirds majority vote was reached about two hours before the midnight (05:00 GMT Saturday) deadline. Earlier, Republicans had rejected a similar three-week extension after provisions against President Obama's immigration plan were dropped. Hillary Clinton endures marathon grilling on Benghazi attack - BBC News.

Hillary Clinton has endured an 11-hour hearing before a Congress committee over the deadly attack on the US consulate in Benghazi, Libya, in 2012. The former secretary of state said she took responsibility and introduced reforms after the attack that killed four Americans, including the US envoy.