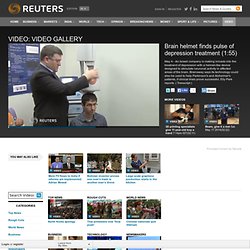 The device sends targeted electromagnetic pulses into the brain, to stimulate previously unreachable neurons in affected areas. This method, called transcranial magnetic stimulation is a better and safer version of conventional electro-shock therapy, according to Chief Technology Officer Ronen Segal. Depression treatment technique uses new helmet therapy. 5 May 2014Last updated at 19:50 ET By Malcolm Brabant BBC News Prof Dissing and a volunteer show how the helmet works A helmet that delivers electro-magnetic impulses to the brain has shown promise in treating people with depression, Danish researchers have said. 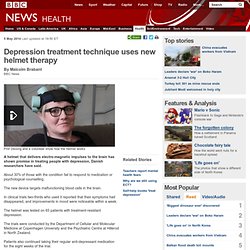 About 30% of those with the condition fail to respond to medication or psychological counselling. Alzheimer Dementia Infrared Light Helmet treatment. The Science Daily in the UK announced an amazing new research using Infrared Light Therapy for the fight against Alzheimer's Disease.Emerson WorldWide has designed 3 different helmets over this period of time, replicating the UK model. 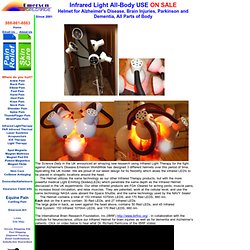 We are proud of our latest design for its flexbility which alows the infrared LED's to be placed in stragetic locations around the head. The Helmet utilizes the same technology as our other Infrared Therapy products, but with the more powerful medical Light Emitting Diodes(LEDs) which penetrate the same depth as the Infrared Helmet discussed in the UK experiments. Our other infrared products are FDA Cleared for aching joints, muscle pains, to increase blood circulation, and relax muscles. They are patented, work at the cellular level, and use the same technology NASA uses aboard the Space Shuttle, and the same technology used by the NAVY Seals! The Helmet contains a total of 153 Infrared 1070nm LEDS, and 170 Red LEDS, 660 nm. Depression treatment technique uses new helmet therapy.

QIGONG. Parkinson's Disease Recovery. Reboot & Rejoice: How I Healed from Parkinson’s Disease Using the Body/Mind Practice of Qigong: Regimen, Background, and Personal Reflections My book, Reboot and Rejoice, is an account of my healing from PD, with qigong healing regimen, personal background and post-recovery insights and suggestions. 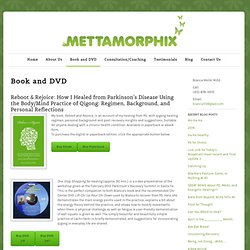 Home - Mettamorphix. Qigong for Parkinson's Disease. About the author: Bianca Molle is a native of Long Island, New York, and remained on the East Coast until age twenty-three. 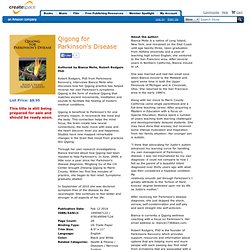 Upon graduation from Hofstra University and a year of teaching high school English, she ventured to the San Francisco area. After several years in Northern California, Bianca moved to LA. She was married and had two small sons when Bianca moved to the Midwest and spent some time in both the Upper Peninsula of Michigan and in Cincinnati, Ohio. 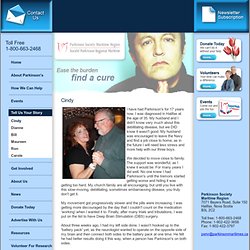 I was diagnosed in Halifax at the age of 35. My husband and I didn't know very much about this debilitating disease, but we DID know it wasn't good. My husband was encouraged to leave the Navy and find a job close to home, as in the future I will need less stress and more help with our three boys. We decided to move close to family.

The support was wonderful, as I knew it would be. My movement got progressively slower and the pills were increasing. About three weeks ago, I had my left side done. Well, this is Friday the 13th of April and I go in for my second surgery on Monday. Although I kept a humorous outlook and made life for my family as normal as could be, I want my life back, and because of wonderful science funded by donations, I am getting closer and closer to the 'light at the end of the tunnel'. 10 Steps To Becoming An Amazing Motivational Speaker. Public speaking is a difficult art to master. 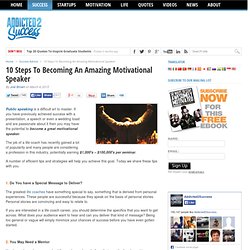 If you have previously achieved success with a presentation, a speech or even a wedding toast and are passionate about it then you may have the potential to become a great motivational speaker. The job of a life coach has recently gained a lot of popularity and many people are considering a profession in this industry, potentially earning $1,000′s – $100,000′s per seminar.

DR WEILL PDS. Essential Tremor. Parkinson's patients helped by laser. Parkinson's Disease sufferers who experience a sudden freezing of their movements can be helped by a new laser therapy. 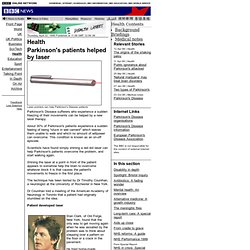 About 30% of Parkinson's patients experience a sudden feeling of being "stuck in wet cement" which leaves them unable to walk and which no amount of willpower can overcome. This condition is known as an on-off episode. Scientists have found simply shining a red dot laser can help Parkinson's patients overcome the problem, and start walking again.

Shining the laser at a point in front of the patient appears to somehow help the brain to overcome whatever block it is that causes the patient's movements to freeze in the first place. The technique has been tested by Dr Timothy Counihan, a neurologist at the University of Rochester in New York. Dr Counihan told a meeting of the American Academy of Neurology in Toronto that a patient had originally stumbled on the idea. Patient developed laser Then he tried the laser. Brain cell destruction. Big strides in treating Parkinson’s disease. Fox News Reporter- Uncrossed Legs WOW! 2012 The TRUTH You're NOT Being TOLD Part 2 (Full Length 88min) Health & Science Devices Part 2. Medifocus Guidebook on Parkinson's Disease. What is Parkinson's Disease? 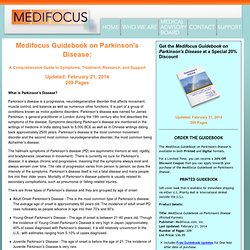 Parkinson's disease is a progressive, neurodegenerative disorder that affects movement, muscle control, and balance as well as numerous other functions. It is part of a group of conditions known as motor systems disorders. Lapozás a bilentűzet <Alt>+<nyil> gombjaival. A Compulsory Introduction "Who forbids me from saying what troubles me...? 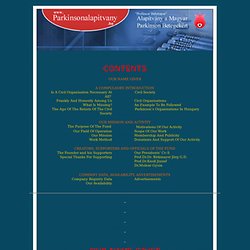 " EPDA UPDATE. As we hope you're all aware, the EPDA's European Unity Walk website is now live. If you haven't visited the site yet, please ensure you do by clicking here. The first-ever European Unity Walk will take place in the heart of Amsterdam on Friday 28 September, and we hope each of you will spend some time looking around the site – where you will find everything you need to know about why the event is needed, what is happening on the day, how to join in the fun, and much more.

Up to 25 patients will be supported each year, with priority to families that cannot afford medical care. The commitment will be for up to 2 million won (approximately $2,000 in U.S. dollars) in medical bill coverage per patient. The agreement was formalized in a memorandum of understanding between a medical society, the Korean Child Neurology Society, and a charity group, the Supporters Society for Korea Parents of the Disabled Association. News Feature Describes Deep Brain Stimulation to Manage Symptoms of Movement Disorder. University of Florida Center for Movement Disorders & Neurorestoration. Our favorite tape to use is the blue “painter’s tape” because it is bright and easy to see! At the University of Florida Center for Movement Disorders and Neurorestoration a patient can partake in a physical therapy evaluation that includes an analysis of your gait.

Freezing of gait occurs in Parkinson’s disease and can contribute to loss of balance and subsequent falls. Our physical therapist will work with you to determine the triggers that contribute to freezing and then provide compensatory strategies to help decrease freezing. Common triggers of freezing include: Neurological_rehabilitation. Be Calm, Fit and Lose Weight in 12 Minutes - Dr. John Douillard, DC. Posturepro: Part 1 Parkinson's Disease Symptoms Significantly Reduced Using Posturology. How to use the magnet and do the eye exercises with a client. Parkinson's Disease and Posturology. Convergence Defects Corrected With Eye Exercises. How To Perform Eye Exercises. Where To Position The Magnet.