PC Stuttering In Games. There’s nothing more annoying than experiencing stuttering in games. 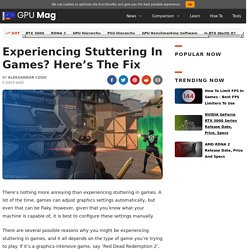 A lot of the time, games can adjust graphics settings automatically, but even that can be flaky. However, given that you know what your machine is capable of, it is best to configure these settings manually. There are several possible reasons why you might be experiencing stuttering in games, and it all depends on the type of game you’re trying to play. How To Limit FPS In Games - Best FPS Limiters [Ultimate Guide] Getting your graphics card’s FPS output to match the refresh rate of the monitor shouldn’t be an issue, but sometimes it is. 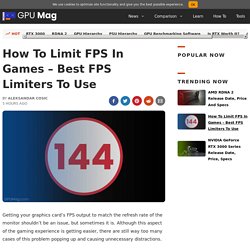 Although this aspect of the gaming experience is getting easier, there are still way too many cases of this problem popping up and causing unnecessary distractions. The biggest reason why we even need to discuss this is that there are several solutions from various different sources with differing results. Before we start talking about those FPS limiting solutions, let’s first see why they are even necessary. The 3 Best GPU Benchmarking Software Right Now. When it comes to building a kickass PC, gathering components and then connecting them is not enough. 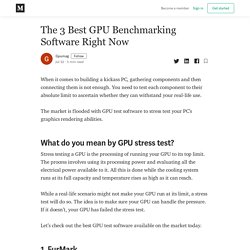 You need to test each component to their absolute limit to ascertain whether they can withstand your real-life use. The market is flooded with GPU test software to stress test your PC’s graphics rendering abilities. Stress testing a GPU is the processing of running your GPU to its top limit. Best GPU Benchmarking Software [July 2020] - GPU Mag. The best GPU benchmarking softwareBuilt for GPUs The old makeshift metric of “Can It Run Crysis?” 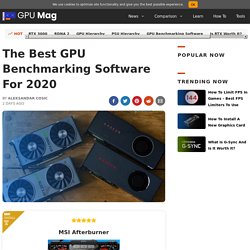 Doesn’t hold the water anymore and we need a much better and more accurate way of testing the latest GPUs. HDMI vs DisplayPort vs DVI vs VGA vs USB-C [Simple Guide] Having a high-performance GPU and a high-resolution monitor requires the right cable that can guarantee you the performance that you desire. 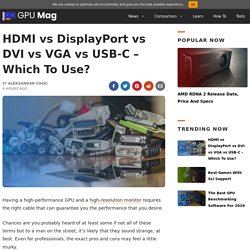 Chances are you probably heard of at least some if not all of these terms but to a man on the street, it’s likely that they sound strange, at best. Even for professionals, the exact pros and cons may feel a little murky. An Insight of the GPU Power Connectors. What Is SLI? - GPU Mag. Scalable Link Interface or SLI is the brand name for Nvidia’s multi-GPU technology meant for linking up two or more graphics cards into a single output using a parallel processing algorithm. 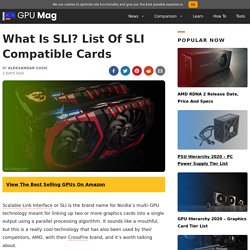 It sounds like a mouthful, but this is a really cool technology that has also been used by their competitors, AMD, with their CrossFire brand, and it’s worth talking about. Let’s see how all of this works! Fun fact: Nvidia isn’t the innovator of this technology as they acquired it from 3dfx Interactive who introduced it in 1998. At that point, it was a little ahead of its time, but in 2004, when SLI made its reappearance, the market for top-performing gaming equipment was ripe. What Is Needed To Run SLI? A friend of mine actually fried his motherboard thinking that just because he had enough slots, he could insert graphics cards and just boot up the computer.

First, you must check if the motherboard is SLI compatible. How To Check If Your PC Can Run A PC Game [Easy] - GPU Mag. In order to avoid the endless disappointment of your PC being unable to run the latest game you’ve been itching to play, it’s necessary to check if you meet the system requirements. 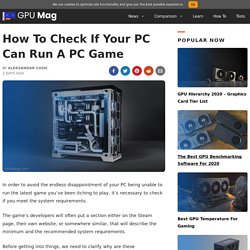 The game’s developers will often put a section either on the Steam page, their own website, or somewhere similar, that will describe the minimum and the recommended system requirements. Before getting into things, we need to clarify why are these requirements presented and which one is needed for which. How Much VRAM Do You Need For Gaming? [Guide] - GPU Mag. With the modern triple-A titles becoming harder and harder to run, there are some key factors to consider in order to get a satisfying gaming experience, with one of the key ones being VRAM. 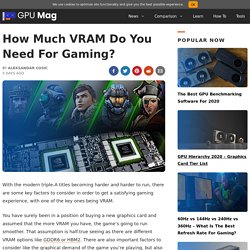 You have surely been in a position of buying a new graphics card and assumed that the more VRAM you have, the game’s going to run smoother. That assumption is half-true seeing as there are different VRAM options like GDDR6 or HBM2. There are also important factors to consider like the graphical demand of the game you’re playing, but also the resolution, in-game graphics settings, etc. AMD RDNA 2 Release Date, Price And Specs [Updated] For a while, AMD has taken the back seat as Nvidia firmly led the GPU market. 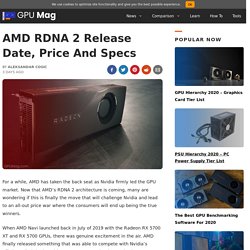 Now that AMD’s RDNA 2 architecture is coming, many are wondering if this is finally the move that will challenge Nvidia and lead to an all-out price war where the consumers will end up being the true winners. When AMD Navi launched back in July of 2019 with the Radeon RX 5700 XT and RX 5700 GPUs, there was genuine excitement in the air. AMD finally released something that was able to compete with Nvidia’s offering, albeit in the mid-range segment only. How To Fix Stuttering In Games. The Best Graphics Card For Gaming In 2020 - Gpumag - Medium. Building a powerful PC that can play all kinds of high-resolution games is the dream of every gamer in this world. 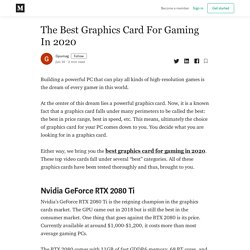 At the center of this dream lies a powerful graphics card. Now, it is a known fact that a graphics card falls under many perimeters to be called the best: the best in price range, best in speed, etc. This means, ultimately the choice of graphics card for your PC comes down to you. You decide what you are looking for in a graphics card. Either way, we bring you the best graphics card for gaming in 2020. Nvidia’s GeForce RTX 2080 Ti is the reigning champion in the graphics cards market. The RTX 2080 comes with 11GB of fast GDDR6 memory, 68 RT cores, and 4,352 CUDA cores. NVIDIA GeForce RTX 3000 Series Release Date, Price, Specs. Just when AMD thought they have struck a blow to Nvidia’s supremacy with RDNA 2, the green team hits them back with the new RTX 3000 series coming up soon. NVIDIA GeForce RTX 3000 Series Release Date, Price, Specs.

NVIDIA GeForce RTX 3000 Series Release Date, Price, Specs. GPU Mag. Dedicated vs. Integrated Graphics Cards [Easy Guide] - GPU Mag. Dedicated and integrated graphics cards are the two most common ways a graphics chip will be in charge of outputting images to your display. Each of them has their strengths and weaknesses, and there are several things that you need to consider before making a choice. It’s important to know exactly what these things are, so that’s the first thing we’re going to do. Dedicated Graphics Cards Not to be confused with external graphics cards, these are a separate piece of hardware that can interface with your motherboard and by extension, the rest of your PC.

They are installed directly on the motherboard most commonly via PCIe slot. Integrated Graphics Cards On the other hand, we have integrated graphics cards or IGPUs. Best Games With SLI Support - GPU Mag. CrossFire vs SLI - Are They Worth It? [Simple Guide] - GPU Mag. Getting two or more graphics cards to do one job sounds like a great idea in theory but in reality, it may not yield such great results. There have been a host of issues that plagued both AMD’s Crossfire and Nvidia’s SLI, both valid approaches to the multi-GPU idea, but neither can really brag about solving their issues properly.

When these technologies made their debuts in the mid-2000s, many were excited about the implicit promises they made. However, the lukewarm start both of these companies offered for their respective multi-GPU solution would, unfortunately, continue throughout their entire lifespans. SLI Compatible Cards: Things You Need to Know About Them. It’s no surprise that SLI compatible cards are one of the necessary upgrades for your computer. If placed wisely, they can boost your system performance, leading to better graphics performance in gaming or other graphics applications. There are a plethora of SLI cards on the market, and most of them are designed to offer users a smoother experience by utilizing the power of multiple graphics cards.

But, before jumping to details, let’s shed some light on the basics. APU vs CPU vs GPU – What Is The Difference? CPU and GPU might be familiar terms for even the most novice computer users, but the APU might be a relatively novel concept. The Best GPU Benchmarking Software For 2020. AMD vs NVIDIA - Which GPU Manufacturer Is Best? [Guide] The war between two titans of the industry is about to re-heat. GPU Power Connectors Explained. An often overlooked area when building a PC tends to be power consumption. A top of the line graphics card can significantly overbear the PSU, and that is something gamers do not want.