Youtube. The History of the Guillotine. During the 1700s, executions in France were public events where entire towns gathered to watch. 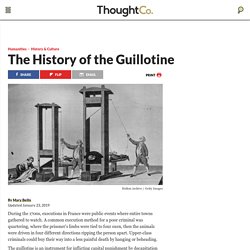 A common execution method for a poor criminal was quartering, where the prisoner's limbs were tied to four oxen, then the animals were driven in four different directions ripping the person apart. Upper-class criminals could buy their way into a less painful death by hanging or beheading. The guillotine is an instrument for inflicting capital punishment by decapitation that came into common use in France after 1792 (during the French Revolution). In 1789, a French physician first suggested that all criminals should be executed by a “machine that beheads painlessly. " Doctor Joseph Ignace Guillotin Doctor Joseph Ignace Guillotin was born in Saintes, France in 1738 and elected to the French National Assembly in 1789. Beheading devices had already been used in Germany, Italy, Scotland, and Persia for aristocratic criminals. 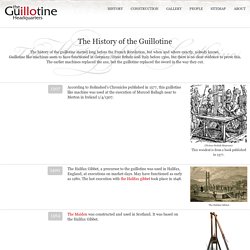 The document represents the first practical steps towards creation of the guillotine. 5/4/1792 Guidon the carpenter that was used to build scaffolds, was asked for an estimated price for the machine suggested by Dr Louis. 5.660 livres including the scaffold. 10/4/1792 Roederer (Procureur général syndic) and Tobias Schmidt (a German harpsichord maker) reached a happy accord: 960 livres was to cover the cost of manufacturing the machine, the sum moreover providing for a leather bag in which to dispose of the severed head. 11/4/1792 It was on this Wednesday afternoon, the first real guillotine was set up, in the Cour du Commerce, rue Saint-André-des-Arts.

It was tried out on sheep and calves. 17/4/1792 The first test on human corpses at a combined hospital, prison and old peoples home, at Bicêtre. 20/4/1792 The newly conceived blade was fixed in position at Bicêtre. The Guillotine’s First Cut - HISTORY. As the spirit of liberté, égalité and fraternité swirled through Paris in the early days of the French Revolution, Dr. 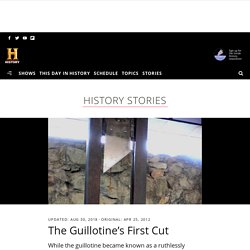 Joseph-Ignace Guillotin rose before the National Assembly in 1789 to lobby for equality in a most unlikely area: capital punishment. The Parisian deputy and anatomy professor argued that it was unfair for common criminals in France to be executed by tortuous methods such as hanging, burning at the stake and breaking on the wheel while aristocratic felons had the privilege of quick decapitations, particularly if they tipped their executioners to ensure swift sword chops. Guillotin beseeched his fellow lawmakers to follow their egalitarian principles and adopt a more humanitarian and equitable system of capital punishment whereby all criminals, irrespective of class, would be beheaded. The solution was found in another of Guillotin’s ideas: a beheading machine that ensured a rapid and merciful death. Facts, Inventor, & History. Executions, the Guillotine and the French Revolution - The Ultimate History Project. 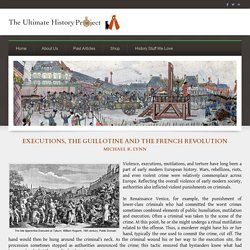 Violence, executions, mutilations, and torture have long been a part of early modern European history. Wars, rebellions, riots, and even violent crime were relatively commonplace across Europe. Reflecting the overall violence of early modern society, authorities also inflicted violent punishments on criminals.In Renaissance Venice, for example, the punishment of lower-class criminals who had committed the worst crimes sometimes combined elements of public humiliation, mutilation and execution. Often a criminal was taken to the scene of the crime. At this point, he or she might undergo a ritual mutilation related to the offense. Auto de fe, Pedro Berruguette, c. 1495. 8 Things You May Not Know About the Guillotine. 1. 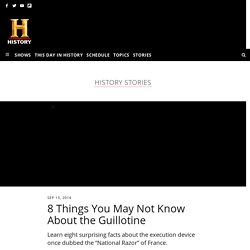 Its origins date back to the Middle Ages. The name “guillotine” dates to the 1790s and the French Revolution, but similar execution machines had already been in existence for centuries. A beheading device called the “planke” was used in Germany and Flanders during the Middle Ages, and the English had a sliding axe known as the Halifax Gibbet, which may have been lopping off heads all the way back to antiquity. The French guillotine was likely inspired by two earlier machines: the Renaissance-era “mannaia” from Italy, and the notorious “Scottish Maiden,” which claimed the lives of some 120 people between the 16th and 18th centuries. Evidence also shows that primitive guillotines may have been in use in France long before the days of the French Revolution. 2.

The origins of the French guillotine date back to late-1789, when Dr. 3.