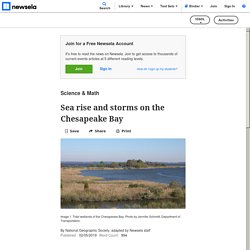 CSSPAR, whose name stands for Chesapeake Sea Level Rise and Storm Surge: Public Awareness and Response, gathers information about sea-level rise on the Chesapeake. It does this work in partnership with organizations like the National Geographic Society. Sea levels around the world are rising due to global warming, which is primarily caused by the burning of fossil fuels like coal and gasoline.

As average temperatures rise, polar ice from both Greenland and Antarctica is melting into the world's oceans. Historically, oceans rise at an average rate of 5 to 8 inches every 100 years. Chesapeake Bay's water level is rising at an even faster rate than average, however, because the land underneath the bay is sinking. Already Near Sea Level Much of the land in the Chesapeake region already lies very near sea level.

Fast Facts. Flooding and Climate Change: Everything You Need to Know. Jump to Section Floods are the most common (and among the most deadly) natural disasters in the United States. 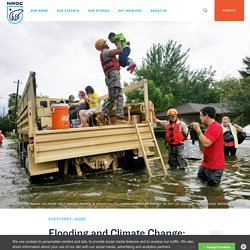 They have brought destruction to every state and nearly every county, and in many areas they are getting worse. As global warming continues to exacerbate sea level rise and extreme weather, our nation’s floodplains are expected to grow by approximately 45 percent by century’s end. Here’s how climate change plays a role in flooding, and how we can better keep our heads above water. Flooding Facts What is a flood? A flood is the accumulation of water over normally dry land. Major types of floods River FloodingThis occurs when a river or stream overflows its natural banks and inundates normally dry land. Coastal FloodingMore than 8.6 million Americans live in areas susceptible to coastal flooding, which happens when winds from a coastal storm, such as a hurricane or nor’easter, push a storm surge—a wall of water—from the ocean onto land. Flooding Causes Climate Change and Flooding. Climate change will boost risk of extreme flooding in northern Europe. By Adam Vaughan Steve Stone/Getty Images Climate change will increase the risk of heavy rainfall and storm surges combining to cause extreme flooding around the UK, Germany and other parts of northern Europe. 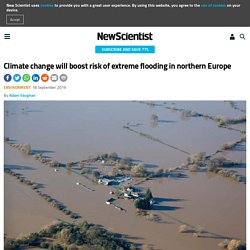 Coastal communities already face the prospect of a worst-case average sea level rise of about a metre by the end of the century, as temperatures rise. Floods. Failing to evacuate flooded areas, entering flood waters, or remaining after a flood has passed can result in injury or death. 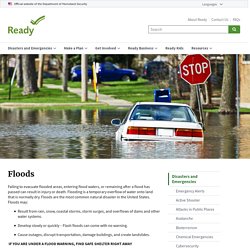 Flooding is a temporary overflow of water onto land that is normally dry. Floods are the most common natural disaster in the United States. Floods may: Result from rain, snow, coastal storms, storm surges, and overflows of dams and other water systems. Develop slowly or quickly – Flash floods can come with no warning. Extreme flooding in DC leads to commuter chaos.

It was a rough morning commute for many on Monday, July 8, in Washington, DC. 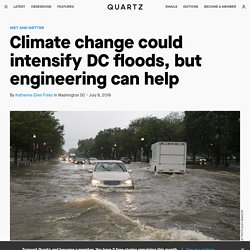 Severe flooding ensued after four inches (about 10 cm) of rain fell within an hour in parts of the city—making it one of the area’s top 10 wettest July days ever recorded. Even the basement of the White House briefly flooded, although it was quickly contained. I’m a DC resident myself, and as I changed out of my sopping wet clothing into dry pants brought to me by a coworker after my ill-advised bike commute, I had to ask myself: Could this extreme flooding be related to climate change?

Any individual weather event is hard to peg to climate change. 'So much land under so much water': extreme flooding is drowning parts of the midwest. Even with half of the houses on her street underwater, Dina Barker looked at the numbers and calculated that it was worth holding out. 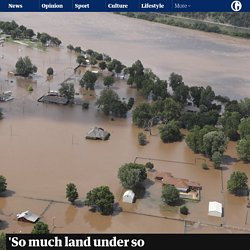 The rate at which water was pouring out of the rain-swollen Keystone dam less than 10 miles up the Arkansas River had been enough to submerge most of Barker’s neighbourhood in Sand Springs, Oklahoma, last week. But her house sits on a small rise just feet from the pop-up lake that rose in hours as the surging river broke the town’s flood walls. Over the following days, Barker paid close attention to the dam’s engineers. If they announced they were opening the gates another couple of notches, it would be time to run. That would depend not only on whether the rain kept coming but, more importantly, where it fell. Flooding in San Jose forces shocked and angry residents from their homes. SAN JOSE, Calif. — For the past two weeks, heavy rains have pushed water levels at one of Northern California’s largest reservoirs into the danger zone. 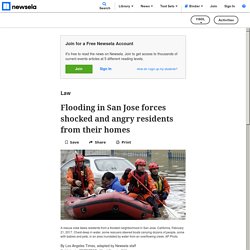 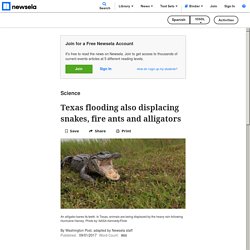 The wild animals are, too. Reports and images of swimming snakes and lurking alligators are making the rounds on social media, and some are not current or real. Some alligator photos were from 2016.