Louis XIV is accused of various crimes against the people of France.

His charges include…
•Supporting an unfair system of government that takes away rights from the citizens of his country
•Wasting tax dollars for his personal life and unnecessary wars
•Hate crimes and discrimination against the Huguenots (French Protestants)
Write a researched position five paragraph essay on whether or not you think Louis XIV should be found innocent or guilty of one of the charges.
Write from the perspective of a French Huguenot, a French peasant, or a French military commander. This paper should be written in first-person perspective from the point of view of your historical figure; if you are the peasant/Huguenot/military commander, you are actually creating a character based on what you find out about this type of person in Louis’ time.
Feel free to be creative, but base your character on the facts you found.
Cite your source for every fact you reference. 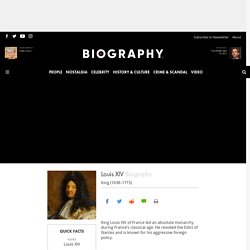 He revoked the Edict of Nantes and is known for his aggressive foreign policy. Synopsis Louis XIV was born on September 5, 1638, in Saint-Germaine-en-Laye, France. Louis XIV. France - The age of Louis XIV. Louis XIV Overview. Palace of Versailles. Louis XIV and Domestic Policy. Louis XIV’s domestic policy was to transform France. 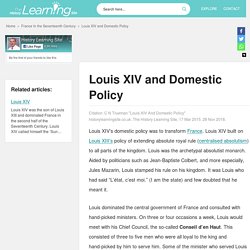 Louis XIV built on Louis XIII’s policy of extending absolute royal rule (centralised absolutism) to all parts of the kingdom. Louis was the archetypal absolutist monarch. Aided by politicians such as Jean-Baptiste Colbert, and more especially, Jules Mazarin, Louis stamped his rule on his kingdom. It was Louis who had said “L’état, c’est moi.” Peasants and King in Burgundy. Louis XIV’s accounting shenanigans and the threat they pose today. Editor’s Note: Have you balanced your check book this month? 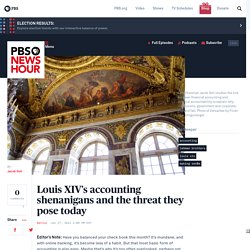 It’s mundane, and with online banking, it’s become less of a habit. But that most basic form of accounting is also easy. Maybe that’s why it’s too often overlooked, perhaps not to our personal peril, but when ignored on a larger scale, putting at risk our government and corporate institutions. Louis XIV, for example, stopped carrying golden notebooks of his expenditures and revenues, and his nation plunged into the red under the weight of multiple wars and opulent palaces.

For a modern example of the importance of accounting, look no further than the collapse of Lehman Brothers. Louis XIV and the Huguenots. Learning Objective Analyze Louis XIV’s persecution of the Huguenots and the consequences that had for France Key Points. 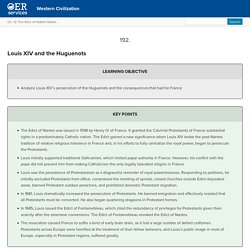 Louis XIV and religion. Louis XIV held simple views regarding religion that dated back to Francis I – that the king controlled the Catholic Church and that the Church should do his biding. 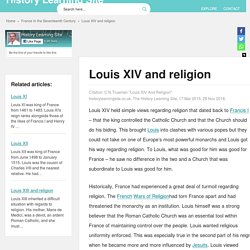 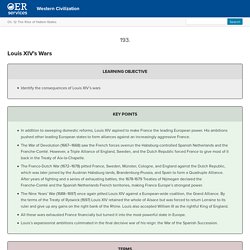 His ambitions pushed other leading European states to form alliances against an increasingly aggressive France.The War of Devolution (1667–1668) saw the French forces overrun the Habsburg-controlled Spanish Netherlands and the Franche-Comté. However, a Triple Alliance of England, Sweden, and the Dutch Republic forced France to give most of it back in the Treaty of Aix-la-Chapelle.The Franco-Dutch War (1672–1678) pitted France, Sweden, Münster, Cologne, and England against the Dutch Republic, which was later joined by the Austrian Habsburg lands, Brandenburg-Prussia, and Spain to form a Quadruple Alliance.

"The Glory of the Sun King"