GossipandGab.com was created to indulge the guilty pleasure of our love of gossip, scandal, interesting news, cheesy and outrageous television shows, weird videos and the delicious buffet of strangeness that is the Internet. 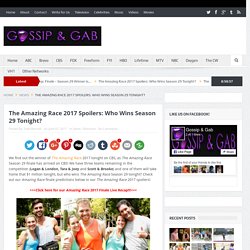 We have three teams remaining in the competition (Logan & London, Tara & Joey and Scott & Brooke) and one of them will take home that $1 million tonight, but who wins The Amazing Race Season 29 tonight? Check out our Amazing Race finale predictions below in our The Amazing Race 2017 spoilers! >>>Click here for our Amazing Race 2017 Finale Live Recap!!! <<< Last week on The Amazing Race Season 29, the final four teams all headed to Seoul, South Korea. [SPOILERS: Click here for a finale sneak peek!] With these three remaining teams, is there really anyone besides Team Mom and Dad to root for? With that being said, Tara & Joey have been dominating this season (except for last week)! 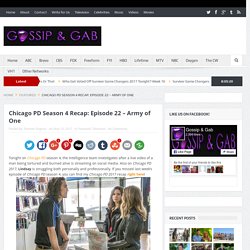 Voight hears some of this conversation and reassigns them to new partners. We then watch as Ruzek takes a call about a live video feed on social media. Olinsky and Halstead head over to the address on the registration. Lindsay and Upton go to Indiana to talk to local authorities about the case against Elijah. 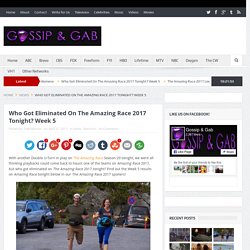 Find out the Week 5 results on Amazing Race tonight below in our The Amazing Race 2017 spoilers! Tonight, we saw Liz & Michael continue their bickering after that last leg of the race. From there, the teams head out to Milan with a Double U-Turn ahead! We all know that Matt & Redmond are still bitter about Ashton & Vanck using it on the before, so will they get their revenge tonight? Get the full details over in our Live Recap, otherwise scroll down for the results on The Amazing Race Season 29 tonight! 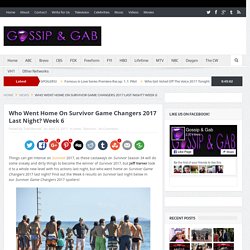 Find out the Week 6 results on Survivor last night below in our Survivor Game Changers 2017 spoilers! Last night on Survivor 2017 Season 34, we moved through things pretty quickly, so you knew drama was coming at Tribal Council! We saw the Nuku Tribe get a lead at the Immunity Challenge, but then let it slip away. The Mana Tribe won immunity and Nuku was headed back to Tribal. Before going, Varner knew he was on the chopping block and talked to everyone one-on-one. Then it all hit the fan at Tribal Council, as Varner decided to out Zeke as transgendered! There was no turning back from this one.

Gossip and gab for tv and entertainment  Gossip and Gab.