Habits, Addictions, And The Ego - New Article By Jose Stevens - The Power Path. Some time ago we issued a warning that this would be a period when addictions would tend to run rampant and unfortunately the evidence is everywhere we look. 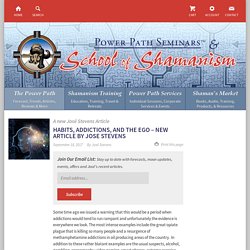 The most intense examples include the great opiate plague that is killing so many people and a resurgence of methamphetamine addictions in oil producing areas of the country. In addition to these rather blatant examples are the usual suspects, alcohol, gambling, pornography, video gaming, smart phones, extreme exercise, food, hoarding, and the like.

Human beings are strange creatures and indeed almost every one of us has tendencies toward extremes in one way or another, even if we deny that we are addicted. Most exercise freaks don’t think of themselves as addicted but they are, just as much as is the alcoholic, and the results can be equally as self-destructive. Many people are destroying their bodies along with their health by overdoing their sports addictions. Behind every addiction are several dynamics that are universal. TEDxRio+20 - Gabor Maté - The Power of Addiction and The Addiction of Power. The Shocking Truth of What Causes Addiction. Ever notice how frequently the word “addict” is used? 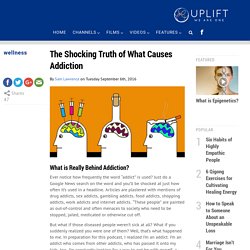 Just do a Google News search on the word and you’ll be shocked at just how often it’s used in a headline. Articles are plastered with mentions of drug addicts, sex addicts, gambling addicts, food addicts, shopping addicts, work addicts and internet addicts. “These people” are painted as out-of-control and often menaces to society who need to be stopped, jailed, medicated or otherwise cut off. But what if those diseased people weren’t sick at all?

What if you suddenly realized you were one of them? What if those diseased people weren’t sick at all? A Different Way of Looking at Addiction Physician and best-selling author, Gabor Maté, shares the shocking truth about what causes addiction and the things we can do to address the problem. Gabor avoids quick-fixes when tackling addiction, ADHD, sickness and the human spirit overall. Our brief but information-packed conversation even helped me understand why I love podcasting. Read More: The Opposite of Addiction is Connection. Right now an exciting new perspective on addiction is emerging. 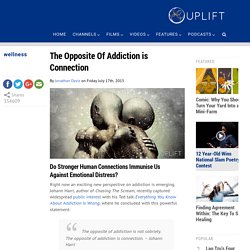 Compare this ’emotional loss’ to Johan Harri’s idea about lack of connection and it is clear they’re talking about a similar emotional condition. Limbic Resonance If connection is the opposite of addiction, then an examination of the neuroscience of human connection is in order. How does this relate to addiction? “Humans require social connection” How Our Ability To Connect Is Impaired By Trauma.

Johann Hari: Everything you think you know about addiction is wrong. It’s ‘digital heroin’: How screens turn kids into psychotic junkies. Susan* bought her 6-year-old son John an iPad when he was in first grade. “I thought, ‘Why not let him get a jump on things?’ ” she told me during a therapy session. John’s school had begun using the devices with younger and younger grades — and his technology teacher had raved about their educational benefits — so Susan wanted to do what was best for her sandy-haired boy who loved reading and playing baseball.

She started letting John play different educational games on his iPad. Eventually, he discovered Minecraft, which the technology teacher assured her was “just like electronic Lego.” Enlarge Image At first, Susan was quite pleased. Still, Susan couldn’t deny she was seeing changes in John. Although that concerned her, she thought her son might just be exhibiting an active imagination. Then, one night, she realized that something was seriously wrong. “I walked into his room to check on him.

We now know that those iPads, smartphones and Xboxes are a form of digital drug. Enlarge Image.