Imaging the Future, Arthur Radebaugh, Bohn Aluminium and Brass Corporation, advertisements. This was a sustained campaign by the company to define the Future in its own terms. 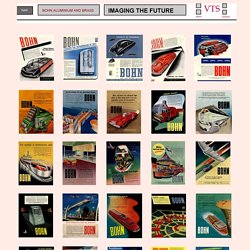 Their product may be utilitarian but their vision was soaring and an appeal to the old spirit of the New York World Fair, This is Tomorrow. The artist whose name and style appears throughout is Arthur Radebaugh, about whom little as yet is known (see signature above). A book published by the Palace of Culture (Jared Rosenbaum and Rachel Mackow) Arthur Radebaugh, the Future we were promised, is much anticipated.My selection is dedicated to Laurent Durieux who really appreciates these things. The images define instead the Past in the overall bulginess and chrome striped whizziness of the Thirties Pulp magazines. Even the Telephone is moulded for speed and cleaving the air. Google Maps. Wildwood googie. Modernist Architecture: Wildwood: The East Coast Capital of Googie... uh, I mean Doo-Wop. Wildwood, on Cape May in New Jersey, is the undisputed capital of Googie modernist architecture on the East Coast. 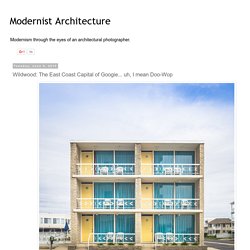 In fact, there's probably a higher concentration of architecture of this type here than anywhere else in the world. But it's also disappearing at an alarming rate. The Wildwoods, as the combined communities are known (it's frankly impossible to tell where one city starts and the other ends), has always been a vacation resort. It got its start at the end of the 19th century, and gained a lot of momentum in the early 50s through the 1960s. While I don't know the architects for most of these, quite a few were designed and built by the Morey family. ... or space-age futurism... ...or even a combination of both... One thing they all seem to have in common is a modernist, Googie design aesthetic, regardless of the chosen theme. That said, the locals all seem to take the crowds in stride.

But personally, I think that calling the architecture "Doo-Wop" cheapens it. Googie Architecture Online. 7 Tools to Hook Your Reader. I’m at the stage in my writing where I’m pitching agents, so I’m still obsessing over my first chapters and this idea of how to “hook” your reader. 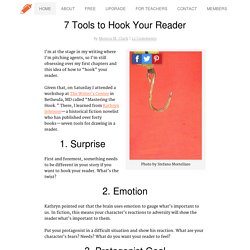 Given that, on Saturday I attended a workshop at The Writer’s Center in Bethesda, MD called “Mastering the Hook.” There, I learned from Kathryn Johnson—a historical fiction novelist who has published over forty books—seven tools for drawing in a reader. 1. Surprise First and foremost, something needs to be different in your story if you want to hook your reader. 2.

Kathryn pointed out that the brain uses emotion to gauge what’s important to us. Put your protagonist in a difficult situation and show his reaction. 3. We’ve all heard this before, but only because it’s important. What does she desperately want or need to achieve before the story concludes? 4. Discern what information the reader needs to know at the beginning. 5. Specific details enable the reader to visualize your story, which is necessary if you’re going to hook your reader. 6. Googie. Un article de Wikipédia, l'encyclopédie libre. 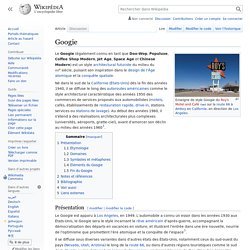