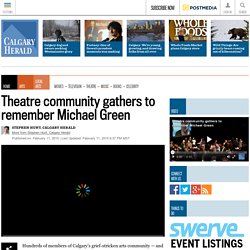 There were tears and glazed looks on the faces of many, who awoke to the stunning news that the One Yellow Rabbit co-founder and driver of the High Performance Rodeo, a man who mentored many of them into a place in the city’s arts scene, was gone. “He changed me,” said Lunchbox artistic director Mark Bellamy, who recalled the story of how Green plucked from the musical theatre circuit and cast him in a One Yellow Rabbit show. “Michael Green saw the possibility in everyone that they didn’t even see in themselves,” said Bellamy. “And that’s our job now,” he added. “To be Michael Greens for the next generation of artists coming up.” “It’s been my privilege to partner with him for 35 years,” he said. High Performance Rodeo co-founder Michael Green, Blackfoot elder Narcisse Blood killed in crash. One Yellow Rabbit co-artistic director Michael Green was among the victims of a fatal car crash near Regina Tuesday. 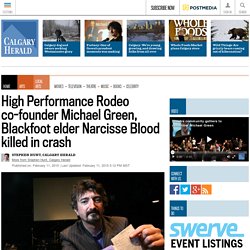 Five people died in the collision, which took place on Highway 6 outside the city, according to a report from the Regina Leader-Post. Police say the crash, which involved three vehicles, happened around 9:30 a.m. Tuesday morning. According to actress and director Michelle Thrush, Green was travelling to Piapot, a reserve outside Regina to talk about Making Treaty 7 – a show that tells the history of the creation of Alberta from the first nation’s perspective – along with Blackfoot elder Narcisse Blood and two other aboriginal artists, Michele Sereda and Lacy Morin-Desjarlais.

“They had made contact”, said Thrush, “possibly wanting to do something like we were doing and Michael was so excited (to talk to them).” “He was an exuberant spirit who embraced the exceptional and the unusual and wanted to share it with as many people as possible. Related shunt@calgaryherald.com. First Nation Community Mourning. Photos de la publication de Arnell... - Arnell Tailfeathers.

When it’s said some people have a spark of creativity, Michael Green was obviously working with an entire engine. 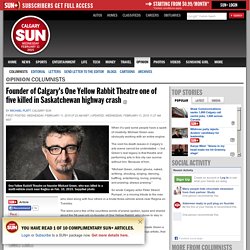 The void his death leaves in Calgary’s arts scene cannot be understated — but Green’s real legacy is that theatre and performing arts in this city can survive without him. Because of him. “Michael Green, rubber gloves, naked, writhing, shouting, singing, dancing, baffling, entertaining, loving, praising, and praising; always praising.” Man stuck in ditch steals Good Samaritan’s vehicle with dog inside, tries to run her over. A driver who hit a ditch in central Alberta allegedly stole the vehicle of a bystander who stopped to help, then attempted to run the Good Samaritan over. 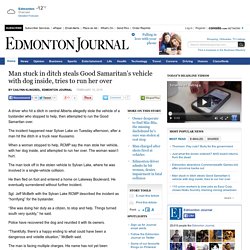 The incident happened near Sylvan Lake on Tuesday afternoon, after a man hit the ditch in a truck near Kuusamo. When a woman stopped to help, RCMP say the man stole her vehicle, with her dog inside, and attempted to run her over. The woman wasn’t hurt. The man took off in the stolen vehicle to Sylvan Lake, where he was involved in a single-vehicle collision. He then fled on foot and entered a home on Lakeway Boulevard.

Sgt. “She was doing her duty as a citizen, to stop and help. Police have recovered the dog and reunited it with its owners. “Thankfully, there’s a happy ending to what could have been a dangerous and volatile situation,” McBeth said. The man is facing multiple charges. Cklingbeil@edmontonjournal.com. Michael Green, One Yellow Rabbit co-founder, killed in Saskatchewan crash - Calgary. Calgary’s artistic community is mourning the loss of a theatre pioneer. 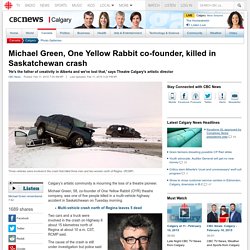 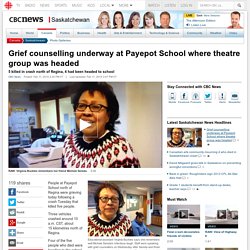 Staff were speaking with grief counsellors on Wednesday after Sereda and three others died in a crash while en route to Payepot School. (Aldo Columpsi/CBC) People at Payepot School north of Regina were grieving today following a crash Tuesday that killed five people. Three vehicles crashed around 10 a.m. CST, about 15 kilometres north of Regina. Four of the five people who died were heading to the school, which is on Piapot First Nation, to give a presentation and conduct a yoga workshop. They included Michele Sereda, who ran a theatre company in Regina and had been teaching drama at the school for five years. Virginia Buckles, an educational assistant at the school, had warm memories of Sereda. "She had an infectious laugh that, like even when I think of her today, I could hear her laughter ringing down the hallways," she said. 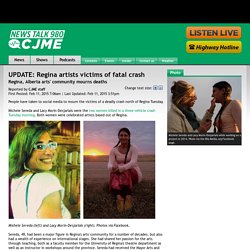