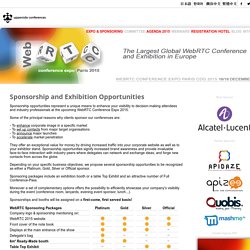 Some of the principal reasons why clients sponsor our conferences are: - To enhance corporate image in a specific market - To set up contacts from major target organisations - To announce major launches - To accelerate market penetration They offer an exceptional value for money by driving increased traffic into your corporate website as well as to your exhibitor stand.

Sponsorship opportunities signify increased brand awareness and provide invaluable face-to-face interaction with industry peers where delegates can network and exchange ideas, and forge new contacts from across the globe. Depending on your specific business objectives, we propose several sponsorship opportunities to be recognized as either a Platinum, Gold, Silver or Official sponsor. WebRTC Paris Conference & Expo- Agenda is Live - Upperside Blog. The fourth edition of the WebRTC Conference & Expo will be taking place in Paris CDG from 16 to 18 December 2015. 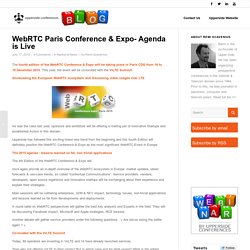 This year, the event will be co-located with the ViLTE Summit. Showcasing the European WebRTC ecosystem and discussing video usages over LTE As was the case last year, sponsors and exhibitors will be offering a melting pot of innovative Startups and established Actors in this domain. Upperside has followed this exciting brand new trend from the beginning and this fourth Edition will definitely position the WebRTC Conference & Expo as the most significant WebRTC Event in Europe. DisruptiveAfricaExpo sur Twitter : "Attend Disruptive Africa Expo as we unveil Disruptive Tech in Africa with @disruptivedean @Alan_Quayle @mectors #Iot #iotexpo #bitcoin"

Changeset 185940. Arnaud Budkiewicz sur Twitter : "A Study of WebRTC Security #WebRTC by Ewan Leaver. Ewan Leaver. Making WebRTC source building not suck (Alex Gouaillard) - webrtcHacks. One of WebRTC’s benefits is that the source to it is all open source. 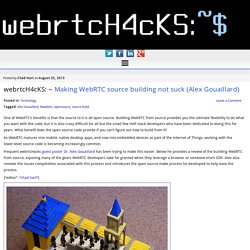 Building WebRTC from source provides you the ultimate flexibility to do what you want with the code, but it is also crazy difficult for all but the small few VoIP stack developers who have been dedicated to doing this for years. What benefit does the open source code provide if you can’t figure out how to build from it? As WebRTC matures into mobile, native desktop apps, and now into embedded devices as part of the Internet of Things, working with the lower-level source code is becoming increasingly common. Frequent webrtcHacks guest poster Dr. Chad Hart sur Twitter : ". @fiverr - why are you using #WebRTC to collect your visitors' IP addresses? @webrtcHacks.

How to stop a leak - the WebRTC notifier - webrtcHacks. The “IP Address Leakage” topic has turned into a public relations issue for WebRTC. 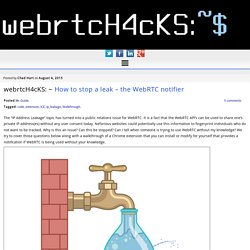 It is a fact that the WebRTC API’s can be used to share one’s private IP address(es) without any user consent today. Nefarious websites could potentially use this information to fingerprint individuals who do not want to be tracked. A Study of WebRTC Security · A Study of WebRTC Security. Tim Panton sur Twitter : "My #webrtc controlled #lego robot. Mini IIT RTC Chicago - TADHack 2015. PowerMedia XMS is a software media server and video MCU for real time communications in SIP and/or WebRTC domains. 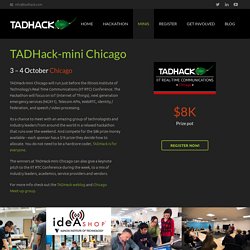 Use PowerMedia XMS to add audio and video features such as: – Conferencing – Video mixing – Recording – Stream insertion/playback – IVR/DTMF detection & response – Transcoding – WebRTC to standard SIP media plane interworking – Video transizing and transrating XMS’s standard media control interface support lets it plug into other TADHacks sponsors such as Telestax. PowerMedia XMS also offers a JavaScript API for WebRTC clients and RESTful API for media server control. Take a look at Vince’s winning myVirtualGolfLesson demo for some ideas on what PowerMedia XMS can do. Getting Started Go to Dialogic’s TADHack 2015 Landing Page for the most up-to-date developer resources. Dialogic is offering a number of pre-configured Amazon Web Services (AWS) instances to help get you going in minutes. 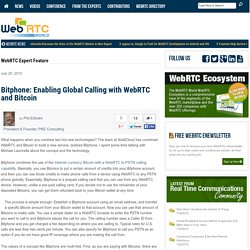 The team at SolidCloud has combined WebRTC and Bitcoin to build a new service, dubbed Bitphone. I spent some time talking with Michael Lauricella about the concept and the technology. Bitphone combines the use of the Internet currency Bitcoin with a WebRTC to PSTN calling capability. Basically, you use Bitcoins to put a certain amount of credits into your Bitphone account and then you can use those credits to make phone calls from a device using WebRTC to any PSTN phone globally. Essentially, Bitphone is a prepaid calling card that you can use from any WebRTC device.

The process is simple enough: Establish a Bitphone account using an email address, and transfer a specific Bitcoin amount from your Bitcoin wallet to that account. The importance of vendor relationships in APIs - Mojo Lingo. For more than five years now, thousands of developers, and probably millions of users, have relied upon a free Google Text-To-Speech (TTS) service. 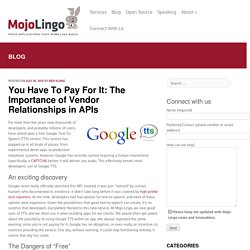 This service has popped up in all kinds of places, from experimental demo apps to production telephone systems. However, Google has recently started requiring a human intervention (specifically, a CAPTCHA) before it will deliver any audio. This effectively breaks most developers’ use of Google TTS. An exciting discovery. [video] Telecommunications as a Service with Arvind Rangarajan. "We provide cloud-based unified communication services and collaboration," explained Arvind Rangarajan, Director, Product Marketing at BroadSoft, in this SYS-CON.tv interview at WebRTC Summit, held June 9-11, 2015, at the Javits Center in New York City. 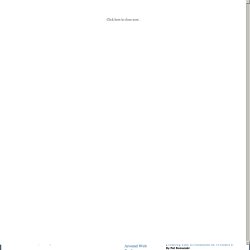 SYS-CON.TV. Peer-to-Peer Web and WebRTC, What’s So Special About It? - Upperside Blog. Topic of the month covered by WebRTC “activists” For this month the topic is: Peer-to-Peer – WebRTC is one of the few peer-to-peer protocols in the web. 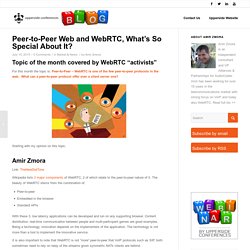 What can a peer-to-peer protocol offer over a client server one? Starting with my opinion on this topic. Amir Zmora. Building your WebRTC App - WebRTC Belgium (Brussels) Moving WebRTC From Asterisk to Headline. Is WebRTC cool yet? 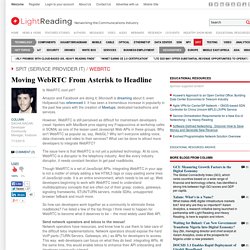 Amazon and Facebook are doing it; Microsoft is dreaming about it; even Hollywood has referenced it. It has seen a tremendous increase in popularity in the past few years with the creation of Meetups, dedicated hackathons and services. However, WebRTC is still perceived as difficult for mainstream developers (read: hipsters with MacBook pros sipping soy Frappuccinos at workshop cafés in SOMA) as one of the lesser-used Javascript Web APIs in these groups. Why isn't WebRTC as popular as, say, WebGL? Why isn't everyone adding voice, data-channels and video to their services? WebRTC and Web Audio resources - Google Dokument. Top WebRTC Tutorials. #1 – Getting Started with WebRTC Sam Dutton, HTML5Rocks All roads lead back to this tutorial on the basics of WebRTC. Originally written in 2012, it is still up to date and one of the best ways to get a comprehensive overview of WebRTC.

RealTimeWeekly sur Twitter : "Today's RealTimeWeekly has #WebRTC #WebSockets & even #AugmentedReality #IoT app! RealTimeWeekly #88. 13 Jul RealTimeWeekly #88 Posted at 14:52h in Issues by ArinSime We’ve got a variety of articles this week covering WebRTC on mobile, augmented reality with browser cameras, and web sockets. As always, if you have tips, event announcements, or suggestions, please contact me directly at Arin@AgilityFeat.com. Thanks for reading! You can block WebRTC from leaking your IP now in uBlock Origin. Ublock is without doubt a popular extension for Firefox and Chrome that blocks network requests and popups, and modifies DOM requests on sites you visit to block advertisement, malicious content and other -- often -- undesirable content on the web. While there is some confusion involved when it comes to picking the right release, there is uBlock and uBlock Origin for instance, it is clear that the two extensions are not identical.

I prefer uBlock Origin as it gives per-site controls which uBlock does not anymore. It seems as well that development is progressing at a faster pace when it comes to new releases. If you have installed the most recent developer build of uBlock Origin which was released a couple of hours ago, you may have noticed a new privacy feature that Gorhill, the lead developer of the project, added to the extension. Developing mobile WebRTC hybrid applications - webrtcHacks. There are a lot of notable exceptions, but most WebRTC developers start with the web because well, Web RTC does start with web and development is much easier there. Market realities tells a very different story – there is more traffic on mobile than desktop and this trend is not going to change.

Silicon Valley is er al een tijdje van in de ban, en ook de banken kunnen er de laatste maanden maar niet over ophouden. Vandaag is ING gastheer van het Nationaal Bitcoin Congres. Everyone in Buenos Aires Is Communicating by Voice Memo Now. Image: Nico Kaiser/Flickr On any given block in Buenos Aires, you are likely to see someone speaking into their phone, but not on it; talking to someone, but not necessarily with anyone. I recently visited the city, and was struck by the fact that it seemed like all the citizens were walking around expressively talking to themselves.

In reality, most people are perpetually sending voice memos to one another. Rianne sur Twitter : "#tadhack #webrtcmeetup #Tadcall @apidaze #note2self @MarquisdeGeek 乂⍱‿●乂... PSA: Chrome M44 WebRTC Release Notes. Guess what? We continue on our focus of speed and stability for Chrome 44. Microsoft Edge support for the WebRTC samples. Web QR.

SuperCamToy - real-time image manipulation with WebRTC - from the Marquis de Geek. About So while hacking around with WebRTC, I realized that I could capture the webcam image into a binary array... and if I can get the RGB elements of each pixel, I can process them. So that's what I did! Each effect in the demo is written in pure Javascript, and has more functionality than is accessible from the UI. For example, the brighten method contains parameters to control how much brightness is applied. This demo users GetUserMedia, Javascript image manipulation, Canvas toDataURL and imgur upload. Use it! Simply click on the link below, allow the computer to access your webcam and away you go! Now, click on Super Cam Toy to try it!

Matt Slater: Bitcoin & smart contract Meteor app. PlayMyBand WebRTC real time game. A team formed by Jaime Casero, Carlos Torrenti and me (Carlos Verdes) has won the Madrid TADHack 1st prize with this HTML5 real time video game. This article (writen by all of us) is about what is behind the scenes so we hope that it will help others to develop similar applications.

You can find all the code in the next GitHub: git clone The idea. Rianne sur Twitter : "#webrtc + #bitcoin stream live video and get #paid... Bitcoin Development Workshop 2015 - Amersfoort (43 minutes by train from Amsterdam Airport Schiphol) Stay updated! If you want to stay updated about future bitcoin events and news, please send us a message to the address mentioned here ? Next Generation Service Platforms. Scale or Die: How We Made Gruveo Scalable. Quick fact: This April, Gruveo monthly call minutes grew 644% year over year. Actually, we have been experiencing this 7X to 8X YoY growth every month since October last year when the iOS app was launched. (December 2014 was an exception where call minutes jumped a staggering 13X vs. December 2013.) Improved Screensharing UX on Talky. Improved Chrome Extension UX, again. A few months ago, Philipp Hancke from &yet posted Improved Screensharing UX on Talky which specifically addresses the UX for first-time users.

The problem being addressed is threefold: In Chrome, desktop capture for screen sharing is enabled via the desktopCapture Chrome extension API, so when first-time users try to start screen share, they must first install the extension, then re-start the screen share request; The method used to signal from the app to the extension to request the media stream involves using a content script to post messages to the background script; When a Chrome extension is installed, content scripts are not injected into already-open tabs, only tabs loaded after it was installed Before I elaborate, I'll clarify that the extension messaging and screen capture is encapsulated in getScreenMedia and its example extension, so you don't have to deal with this whole process in your app directly. The new Android M App Permissions - Dag-Inge Aas - webrtcHacks.