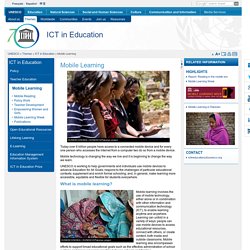 Mobile technology is changing the way we live and it is beginning to change the way we learn. UNESCO is working to help governments and individuals use mobile devices to advance Education for All Goals; respond to the challenges of particular educational contexts; supplement and enrich formal schooling; and, in general, make learning more accessible, equitable and flexible for students everywhere. 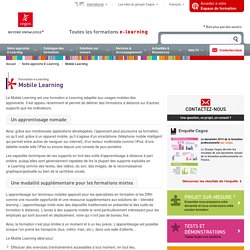 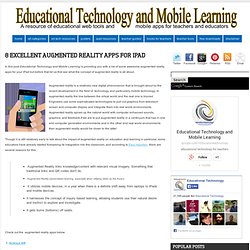 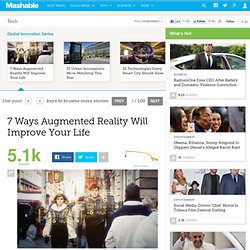 Morton Heilig, the "Father of Virtual Reality," patented the Sensorama Stimulator, which he called an "experience theater," on Aug. 28, 1962. Over time, the idea of using technology to create a layer over the real world has been honed and refined and put in our palms, thanks to the proliferation of smartphones. Usages Mobile Learning. Effective%20User%20Interface%20Design%20for%20Mobile%20Learning. Adaptable Mobile User Interfaces for e-Learning Repositories. The paper describes a system enabling creation of adaptable mobile user interfaces for e-learning repositories, such as Moodle. 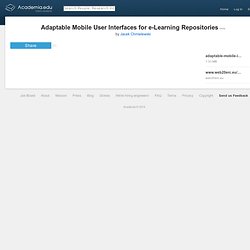 World_differences_in_the_use_of_mobile_phones. Mobile Learning: Course Interface Design for Smartphones (e.g. iPhone) Versus Tablets (e.g. iPad) When designing a course for mobile devices we have to make a fundamental decision: are we going to design the course for both smartphones or tablets...or both? 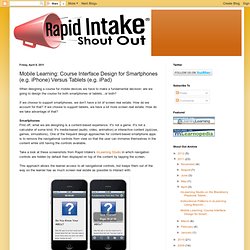 If we choose to support smartphones, we don't have a lot of screen real estate. How do we account for that? If we choose to support tablets, we have a lot more screen real estate. How do we take advantage of that? Smartphones First off, what we are designing is a content-based experience. Take a look at these screenshots from Rapid Intake's mLearning Studio in which navigation controls are hidden by default then displayed on top of the content by tapping the screen. This approach allows the learner access to all navigational controls, but keeps them out of the way so the learner has as much screen real estate as possible to interact with. These controls can then be used to allow the learner to access other tools that need the full screen, such as the Table of Contents and Glossary. NICOP 2012 / e-Education. 50 Must-Download Apps For Lifelong Learners.

Long after degrees have been conferred and careers have been launched, many folks just can’t seem to quit school. 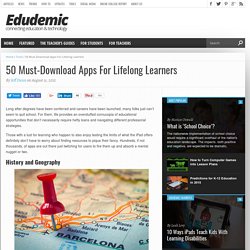 For them, life provides an overstuffed cornucopia of educational opportunities that don’t necessarily require hefty loans and navigating different professorial strategies. Those with a lust for learning who happen to also enjoy testing the limits of what the iPad offers definitely don’t have to worry about finding resources to pique their fancy. Hundreds, if not thousands, of apps are out there just twitching for users to fire them up and absorb a mental nugget or two. 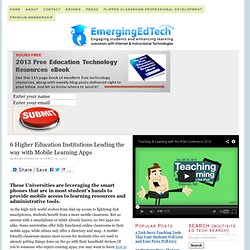 But as anyone with a smartphone or tablet already knows, no two apps are alike. Some universities offer fully functional online classrooms in their mobile apps, while others only offer a directory and map. A mobile-friendly classroom means more access for students who are used to already getting things done on the go with their handheld devices (If you’re someone who enjoys creating apps, you may want to learn how to become a mobile app developer). Students see big incentives for mobile learning Incoming students at Seton Hall University received free smartphones in 2012, according to U.S. University of Phoenix Students at the University of Phoenix study in over 200 institutions and online. 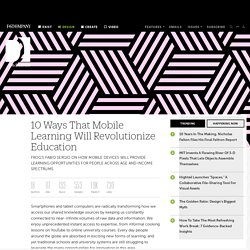 We enjoy unprecedented instant access to expertise, from informal cooking lessons on YouTube to online university courses. Every day people around the globe are absorbed in exciting new forms of learning, and yet traditional schools and university systems are still struggling to leverage the many opportunities for innovation in this area. Recently frog has been researching how learning models are evolving—and how they can be improved—via the influence of mobile technologies. We’ve found that the education industry needs new models and fresh frameworks to avoid losing touch with the radically evolving needs of its many current and potential new constituencies.

Check Out These Apps.