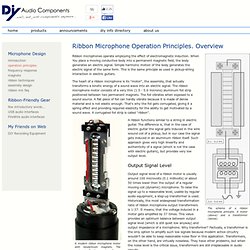 A motor (above) and a transformer (below). 0.1 - 0.2 mV 3.0 - 5.0 mV Ribbon microphones operate employing the effect of electromagnetic induction. When You place a moving conductive body into a permanent magnetic field, the body generates an electric signal. The heart of a ribbon microphone is its "motor", the assembly, that actually transforms a kinetic energy of a sound wave into an electric signal. A modern ribbon microphone motor with neodymium magnets. A ribbon functions similar to a string in electric guitar. Output Signal Level Output signal level of a ribbon motor is usually around 100 microvolts (0.1 millivolts) or about 50 times lower then the output of a regular moving coil (dynamic) microphone. You may ask - why don't we use a transformer with a higher transformation ratio to get a higher signal level? 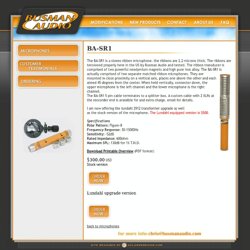 The ribbons are tensioned properly here in the US by Busman Audio and tested. The ribbon transducer is comprised of two powerful neodymium magnets and high pure iron alloy. The BA-SR1 is actually comprised of two separate matched ribbon microphones. They are mounted in close proximity on a vertical axis, places one above the other and each aimed 45 degrees from the center. When held vertically, connector down, the upper microphone is the left channel and the lower microphone is the right channel. I am now offering the lundahl 2912 transformer upgrade as well as the stock version of the microphone. 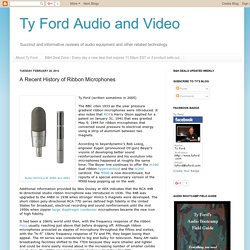 It also notes that RCA's Harry Olson applied for a patent on January 31, 1941 that was granted May 9, 1944 for ribbon microphones that converted sound pressure to electrical energy using a strip of aluminum between two magnets. According to beyerdynamic's Bob Lowig, engineer Eugen (pronounced OY-gun) Beyer's visions of developing better sound reinforcement systems and his evolution into microphones happened at roughly the same time. The Beyer line continues to offer the m160 dual ribbon hypercardioid and the m260 cardioid. The M500 is now discontinued, but reports of a special anniversary version of the M500 keep popping up on the web. Additional information provided by Wes Dooley at AEA indicates that the RCA 44B bi-directional studio ribbon microphone was introduced in 1936. 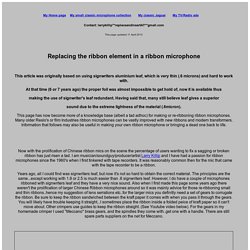 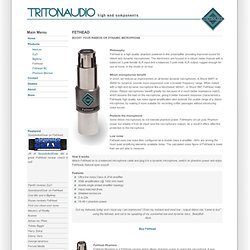 The electronics are housed in a robust metal chassis with a balanced 3-pole female XLR input and a balanced 3-pole male XLR output, rugged enough for use at home, in the studio or on tour. Which microphones benefit In short, we noticed an improvement on all tested dynamic microphones. A Shure SM57 or SM58 for instance, sounds more responsive over a broader frequency range. When mated with a high-end dynamic microphone like a Sennheiser MD441, or Shure SM7 FetHead really shines. Ribbon microphones benefit greatly too because of a much better impedance match, which lessens the load on the microphone, giving it better transient response characteristics. Low noise Fethead uses low noise jfets configured as a double class a amplifier. Apex 205 ribbon mic + transformer mods... Here at last are my recorded notes of moding the Apex 205. 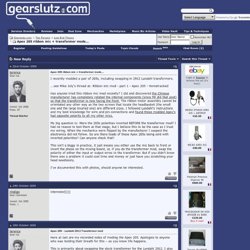 Apologies to anyone who was holding their breath for this – as you know life happens. This is primarily about swapping the stock transformer for the Lundahl 2912. I also retensioned the ribbons (I can get back later on that) and did some basic tests for ribbon resonance afterwards (all cudos to Mike Joly for his guidance in various theads). First a preamble, which I think is necessary as this guide may only be of use if your mic resembles mine in orientation: On my first attempt, as I mentioned previously, I discovered that having installed the transformer the polarity was inverted compared to my other mics. I re-checked Michael Joly’s Hometracked blog on Moding the 205, which, although it doesn’t specifically go into transformer mods, has some photos of the mic taken apart and I wanted to see if I had put things back the right way.