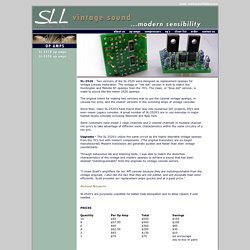 The vintage or “red dot” version is built to match the Huntington and Melville NY opamps from the 70’s. The clean, or “blue dot” version, is made to sound like the newer 2520 opamps. The original intent for making two versions was to use the colored vintage opamps, in console mic pres, and the cleaner versions in the summing amps of vintage consoles. Since then, many SL-2520’s have found their way into numerous DIY projects, EQ’s and even newer Legacy consoles. A great number of SL-2520’s are in use everyday in major market studio consoles including Nashville and New York. Some customers have mixed 2 clean channels and 2 colored channels in multiple channel mic-pre’s to take advantage of different sonic characteristics within the same circuitry of a mic pre. 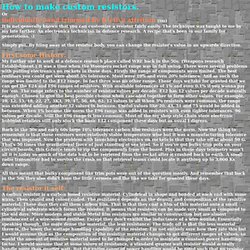 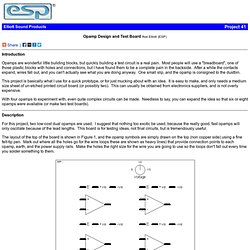 Most people will use a "breadboard", one of those plastic blocks with holes and connections, but I have found them to be a complete pain in the backside. After a while the contacts expand, wires fall out, and you can't actually see what you are doing anyway. One small slip, and the opamp is consigned to the dustbin. This project is basically what I use for a quick prototype, or for just mucking about with an idea. With four opamps to experiment with, even quite complex circuits can be made.

OA10 Discrete Op-amp. Hairball Audio, LLC - DIY JE-990 Discrete Operational Amplifier. One of the key features of the Lola Microphone Preamplifier is the inclusion of two 990 op-amps. Deane Jensen’s now famous JE-990 paper describing the design, testing, and theory behind a powerful ultra low noise operation amplifier, was first introduced in the February 1980 AES journal. The design started with the LM394 dual super matched transistor as the input device. The LM394 is actually a monolithic device consisting of two pairs of 50 transistors connected in parallel to eliminate random variations in the individual devices. 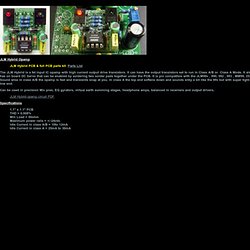 It can have the output transistors set to run in Class A/B or Class A Mode. It also has on board DC Servo that can be enabled by soldering two solder pads together under the PCB. Can be used in precision Mic pres, EQ gyrators, virtual earth summing stages, headphone amps, balanced in receivers and output drivers. JLM Hybrid opamp circuit PDF. MCI 2002 Opamp - NEW: SystemsStore.com. How transistor works, an alternate viewpoint.

Voltage-driven charge-flows First of all, you must abandon the idea that current travels in transistors or flows inside of wires. 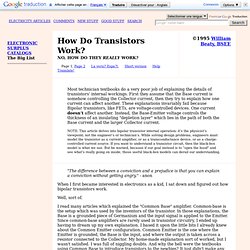 Yes, you heard me right. Current does not flow. Electric current never flows, since an electric current is not a stuff. Electric current is a flow of something else. Since a current is a flow of charge, the common expression "flow of current" should be avoided, since literally it means "flow of flow of charge So what flows inside of wires? The stuff that moves within wires is not named Electric Current. Second: the charges found within conductors do not push themselves along, but instead they're pushed by "potential difference;" they're pushed by the voltage-fields within the conductive material.

The OP-AMP. Before we describe anything technical, let's see one in action. 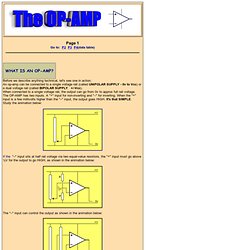 An op-amp can be connected to a single voltage rail (called UNIPOLAR SUPPLY - 0v to Vcc) or a dual voltage rail (called BIPOLAR SUPPLY +/-Vcc). When connected to a single voltage rail, the output can go from 0v to approx full rail voltage. The OP-AMP has two inputs. A "+" input for non-inverting and "–" for inverting. When the "+" input is a few millivolts higher than the "–" input, the output goes HIGH. If the "–" input sits at half rail voltage via two equal-value resistors, the "+" input must go above ½V for the output to go HIGH, as shown in the animation below: Classic Audio Products of Illinois.

The gar2520 DOA Full Kit Bundle is a full and complete parts kit with everything required to complete the gar2520 Discrete Operational Amplifier build. 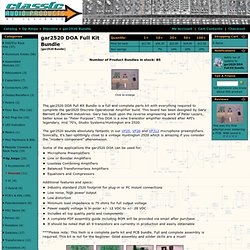 This board has been designed by Gary Barnett of Barnett Industries. Gary has built upon the reverse engineering work of Peter Lazaro, better know as “Peter Purpose”. This DOA is a nine transistor amplifier modeled after API’s legendary, mid ‘70’s, Studio Systems/Huntington era 2520. The gar2520 sounds absolutely fantastic in our VP25, VP26 and VP312 microphone preamplifiers. Scott Liebers Labs - Op Amps and Outboard Gear.

Gar2520 Discrete Opamp Kit. Quote: Originally Posted by skydog a couple of questions...will there be a pre built option available? 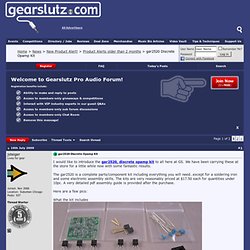 If so how much? Hey skydog, When Gary and I developed our "relationship" regarding his opamps, I agreed that I would never assemble and sell them myself. I do also have Scott's SL-2520 red and blue dot available with the same add to VP26 method. And what do you feel are the sonic differences and similarities between the gar2520 and the sl 2520 red and blue dot versus old/new school api?

Well...as usual...this is a slippery slope and very subjective to each individual.