Young Kingdoms Wiki. Tips for Game Masters. By Alan De Smet You are a Dungeon Master, a Storyteller, a Referee, an Animator, a Marshall, a Director or whatever your favorite role-playing game calls it. 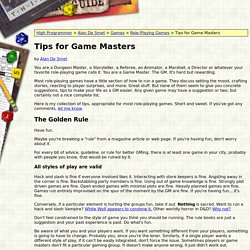 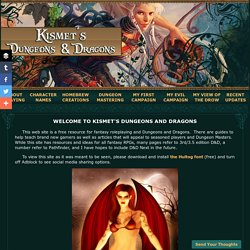 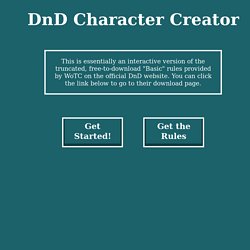 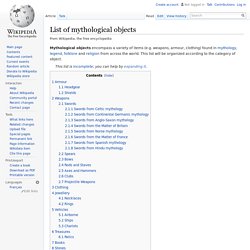 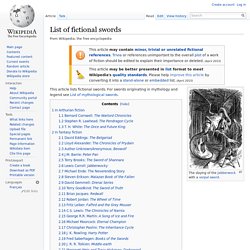 For swords originating in mythology and legend see List of mythological swords. In Arthurian fiction[edit] The sword Excalibur is important in the Matter of Britain — Arthurian literature and myth.[1] Some examples of works which retell the tale of the sword include: Bernard Cornwell: The Warlord Chronicles[edit] A place to share thoughts and ideas about Dungeons and Dragons. Pathfinder Crafting Calculator. Acid (DC 15) You can throw a flask of acid as a splash weapon with a range increment of 10 feet. 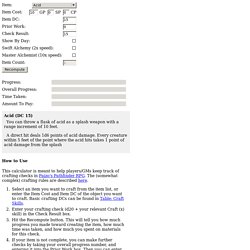 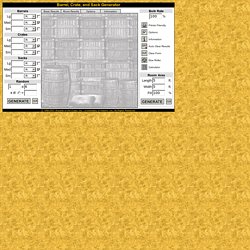 Basic Results Tab Click the "Generate" button to generate barrels, crates and sacks. Pathfinder Society: Noob to Pro. Start where you are. 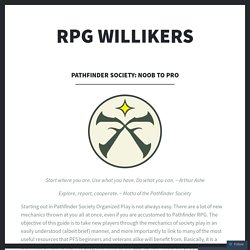 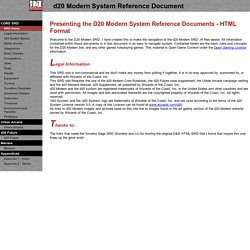 I have created this to make the navigation of the d20 Modern SRD .rtf files easier. All information contained within those documents is in this document in an easy to navigate system. Contained herein are the basic rules and concepts for the D20 Modern line, and any other games roleplaying games. This material is Open Game Content under the Open Gaming License information. Legal Information. This site is dedicated to the home-brew conversion of the entire Eberron campaign world from d20 v3.5 to the Pathfinder rules set, including, but not limited to, the races, classes, prestige classes, feats, spells, magical items and creatures originally presented in the Eberron campaign world. 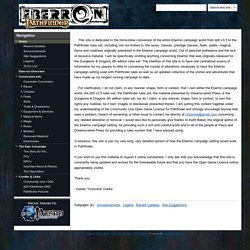 Out of personal preference and the lack of resource material, I will be specifically omitting anything concerning Eberron that was originally released for the Dungeons & Dragons 4th edition rules set. The intention of this site is to have one centralized source of information for my players to refer to concerning the myriad of alterations necessary to have the Eberron campaign setting used with Pathfinder rules as well as an updated collection of the stories and adventures that have made up my longest running campaign to date. In essence, this site is just my very long, very detailed opinion of how the Eberron campaign setting would work in Pathfinder.

Home Page. Roleplaying Tips for game masters for all role-playing systems. The Mother Of All Character Questionnaires Use this list of questions to construct or add to your own characrer questionnaire. The questions cover different genres and types of details, so feel free to exclude or modify to suit your group. Questions are divided into broad categories.

And similar questions and bunched into groups within their category. For brevity, I cut out most follow-up explanation type questions, such as "Why", "how come", and so on. Introduction Questions Give a two or three word description of yourself. Physical Traits. List of legendary creatures by type. Tabletop Audio - Ambiences and Music for Tabletop Role Playing Games. The Alignment System. A creature's general moral and personal attitudes are represented by its alignment: lawful good, neutral good, chaotic good, lawful neutral, neutral, chaotic neutral, lawful evil, neutral evil, or chaotic evil. Alignment is a tool for developing your character's identity.

1001 Common Structures in a Village/Town/City. This is the revamped version of the old thread, started with some sort of planning. Ever had trouble thinking of random buildings for an urban setting? Ever just drawn some rectangular shapes and said 'OK, that's a building' without bothering to explain it? Random Generators - RandomTables. Fantasy name generators. Names for all your fantasy characters. Ash’s Guide to RPG Personality & Background.

This compendium of rules, charts, and tables contains all of the open rules in the system, and is provided for the use of the community of gamers and publishers working with the system. This compendium is NOT the official Pathfinder Roleplaying Game! Players interested in a user-friendly introduction to the Pathfinder system will want to check out the full line of Pathfinder Roleplaying Game products, which comes with lots of great monsters, illustrations, advice and more! All of these products are also available in affordable PDF editions. If you're just getting started with the Pathfinder Roleplaying Game, be sure to check out the Beginner Box which details all the basics for first time players and Game Masters alike!