How Do Cells Produce Glutathione? Glutathione (GSH) is synthesized in the cytoplasm in virtually all cells from its constituent amino acids by two sequential ATP-requiring enzyme catalyzed reactions (see figure below) [1]. 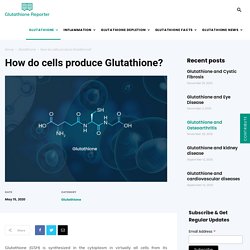 The first reaction is the formation of the dipeptide γ-glutamylcysteine (GGC) from the amino acids L-glutamic acid and L-cysteine. The second reaction adds a glycine to the Gamma-glutamylcysteine to produce the tripeptide glutathione. The first reaction is rate limiting and is catalyzed by the enzyme glutamate-cysteine ligase (GCL, EC 6.3.2.2; formerly γ-glutamylcysteine synthetase). GCL is composed of a heavy catalytic subunit (GCLC, MW ~ 73,000) and a light modifier (GCLM, MW ~ 30,000) subunit. Glutathione and Neurodegenerative Disease. It’s well known that our risk of developing chronic diseases increases as we age. 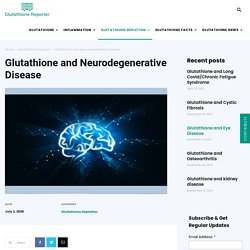 The reasons behind this are incredibly complex, but one of the most widely accepted explanations is called the “free radical theory of aging” [1]. First conceived in 1956, it is one of the most thoroughly researched theories known and, although not fully proven, is the best theory so far. It provides conclusive evidence that oxidative stress is intimately involved in aging. As our lifespan increases, we become more susceptible to chronic disease. Especially those brought on by oxidative stress, like neurodegenerative diseases [2] which insidiously affect our brain and cognition.

A compromised glutathione (GSH) system in the brain has a strong correlation with oxidative stress and has been shown to be implicated in neurodegenerative diseases such as Alzheimer’s disease, Parkinson’s disease, amyotrophic lateral sclerosis, progressive supranuclear palsy, Huntington’s disease and multiple sclerosis [3-5]. What is Gamma-Glutamylcysteine (GGC) Gamma-glutamylcysteine (GGC) is a dipeptide and is the immediate precursor to the tripeptide glutathione (GSH). 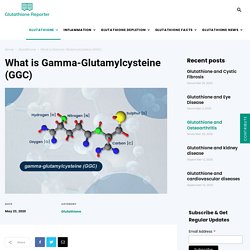 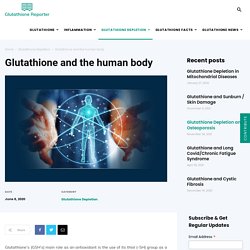 However, glutathione (GSH) has several other vital maintenance functions, including: A cofactor in the function of several antioxidant enzymes including, glutathione peroxidases, which are responsible for the degradation of peroxides and glutathione transferases which are responsible for the detoxification of xenobiotics.Maintenance of ascorbate (Vitamin C) in its reduced state so it can remain an effective antioxidant/reducing agent. It does this through the activity of the glutathione-dependent enzyme dehydroascorbate reductase.An essential component in an NADPH pathway that prevents cellular components from being oxidized. Glutathione and It’s Importance to Life. Glutathione, often referred to as the “Master Antioxidant”, is the most biologically abundant antioxidant that protects almost all aerobic (air breathing) organisms from bacteria to humans. 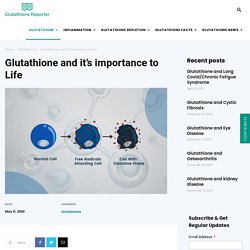 It is found mainly intracellularly (inside cells) where its concentration is in the same order as that other vital nutrient, glucose. There is no doubt that glutathione is of utmost importance for the human body. In fact, it plays a vital role in living organisms by protecting cells from oxidative damage caused by a myriad of internal and external stressors. Study, Research & Technical Information About Glutathione. Glutathione and It’s Importance to Life. Glutathione and the Human Body. Glutathione and Homeostasis. Glutathione and Inflammation. Over many decades of extensive research, glutathione (GSH) has emerged as the crucial player in regulating inflammation [1-4]. 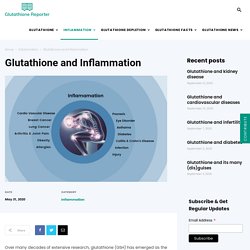 It does so very effectively by destroying ROS, or free radicals, produced by our immune system in response to threats. In turn, this protects us from the insidious and often destructive effects of oxidative stress. But how is oxidative stress related to the immune system? The core mediators of the immune system, the lymphocytes, perform their bacterial, viral and cancer cell killing function by generating large amounts of ROS, including superoxide and hydrogen peroxide. These species are highly toxic, not only to the invaders, but also our very bodies. Glutathione (GSH) will efficiently neutralize an overproduction of ROS. As the first line of defense against oxidative stress, antioxidants are crucial. Homeostasis refers to an ideal regulated value or level. Picture another fundamental homeostatic level that is tightly controlled: our body temperature. Glutathione Reporter. Our immune system is an incredible achievement of evolution without which we would succumb to even the slightest infection. 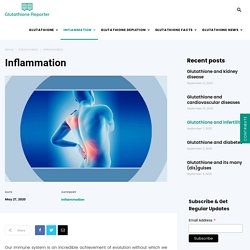 It performs its tasks quietly in the background most of the time, and only when we develop a fever, for instance, are we aware of its presence. There are occasions, however, when our immune system becomes too aggressive and persistent, and our very health suffers as a consequence. We generally distinguish between two types of inflammation: acute and chronic. Acute inflammation happens when our immune system responds to injury or infection. It serves to protect us from bacteria and viruses that could cause havoc with our health if left unchecked.

The release of reactive oxygen species, known as ROS or free radicals, regulates our immune responses. We now understand that chronic inflammation has its roots in poor lifestyle choices such as smoking, stress, poor sleep and even environmental toxins. References Chen, Y., Z. Measuring Cellular Glutathione Concentration. One of the impediments to knowing one’s glutathione (GSH) status is the lack of standardized analytical methods for determining glutathione (GSH) in blood, plasma, tissue and cellular material. 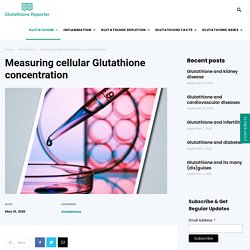 Unlike most other biochemical blood markers (e.g. cholesterol or glucose) glutathione (GSH) analysis is not part of the regular battery of tests performed when a blood sample is taken. This is due mostly to the labile nature of glutathione (GSH) in biological systems. Glutathione (GSH) is considered a high turnover dynamic molecule where it can both be readily oxidized to its disulphide form GSSG or also broken down to its constituent amino acids by the action of endogenous enzymes. This means that samples require immediate chilling and treatment. Sample pre-treatment usually begins with the addition of an acid which not only lyses the cells but also brings about the precipitation of many contaminating proteins. 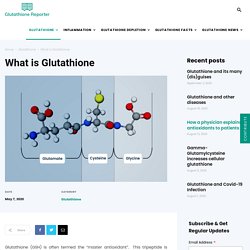 This tripeptide is ubiquitous in nature and is produced by every organism from bacteria, to plants to animals that derives energy from oxidative phosphorylation and respiration. Glutathione is synthesized in the cytosol of each cell by the action of two enzymes in an elegantly regulated system that allows it to be maintained at different homeostatic levels in different tissue types, with the liver, given its detoxification role, having the highest amounts. Glutathione plays a pivotal role in most key physiological functions including but not limited to maintenance of cellular redox, neutralising free radicals, cell cycle regulation, proliferation, apoptosis, xenobiotic metabolism, and the recycling of other cellular antioxidants such as Vitamins C and E. Study, Research & Technical Information About Glutathione.