My name is Gloria Cardenas and I am a Salt Lake City employment visa attorney. For 26 years, I have helped countless workers from throughout the world obtain work visas. Immigration law can sometimes get complicated. Even the most experienced immigration attorney must constantly stay on top of changes in the laws and statutes.

Hire Immigration Lawyer in Salt Lake City. Salt Lake City Employment Visa Attorneys. The Current State of DACA Litigation and Legislation. Back in March of 2018, DACA was scheduled to terminate based on a September 2017 announcement by President Trump.

Congress was challenged to negotiate a solution to avoid the termination, but while negotiations followed, so did litigation, leading to the filing of an injunction. Federal courts required DHS to continue to take DACA renewal requests, even past the March deadline, meaning you still have some time to work with a DACA attorney in Salt Lake City. The next ruling will likely come from the U.S. Court of Appeals, and then possibly move on to the U.S. Supreme Court. Newest Policy for F, M, and J Non-Immigrants Can Lead to Deportation. If you’re an international student attending college in the U.S., a new USCIS policy could have devastating consequences if you somehow violate your visa status. 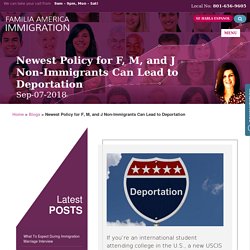 The new policy changes the way that F-1, J-1, and M students in the United States accrue unlawful presence as visa holders who have violated visa terms by staying in the U.S. past their duration of stay, failing to attend school, or participating in unsanctioned employment. If you fall into any of these three categories, you could be looking at deportation, but you may be able to prevent it with the help of a deportation defense attorney in Salt Lake City. Policy Background In 1996, Congress passed a law that non-immigrant visa holders overstaying their duration of stay for more than 180 days could be barred for 3 years, and those overstaying for more than a year could be barred for 10 years for accruing unlawful presence. F, J, and M visas are unique in that students don’t receive a specific length of stay.

Why Should you Hire a Family Immigration Attorney? The entire process of immigration can be tough. 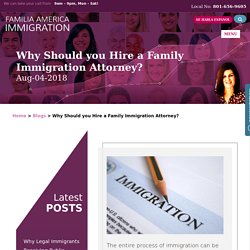 There many forms to fill out and knowledge you need to have. Our current immigration system is broken. Who is Qualified to Apply for a Green Card? The United States as a lot to offer immigrants. 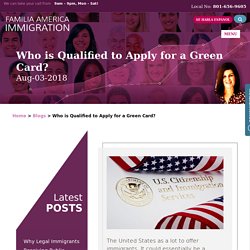 It could essentially be a better life for you. Getting a green card will be your first step in eventually applying for U.S. citizenship. You’ll have rights to work, live, enter, and exit in the United States for the rest of your life. Immigrants in Detention Not Entitled to Bail Hearing, Rules Supreme Court. According to a Supreme Court ruling from Tuesday, February 27, immigrants who are held in detention within the United States are not entitled to a bail hearing. 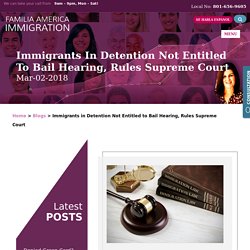 The ruling, which could affect tens of thousands of people, does not apply to standard deportation cases but, rather, those where US residents are facing deportation due to committed relatively minor crimes. Philadelphia Man Detained during Routine Green Card Interview. When Jose Ivan Nunez and his husband, Paul Frames, attended their January 31 appointment at the US Citizenship and Immigration Services offices in Philadelphia, they were expecting an ordinary, routine meeting, and the next step towards Nunez’ green card. 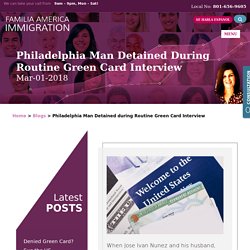 Instead, ICE officials entered the room after the interview was paused, taking Nunez into custody. He now potentially faces deportation back to Mexico, where his sexual identity could mean he is in serious danger. The reasons for detaining Mr. Do You Really Need a Green Card Attorney During Donald Trump’s Presidency? Millions of people still believe in the American Dream and want to cross the border of the U.S. to pursue a better life and open infinite career and education opportunities. 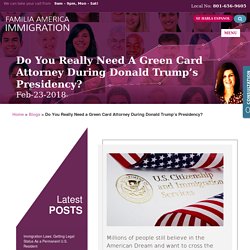 The mere notion of moving to the U.S. sounds exciting, but the process of obtaining a green card or crossing the U.S. border in any other way to live, work, and stay in the country may sound complex, impossible or even scary under the presidency of Donald Trump. Trump, a staunch opponent of immigration, has previously made countless comments about the need to introduce strict immigration policies, protect the borders from immigrants, crack down on illegal immigration, and even deny millions of Dreamers a path to U.S. citizenships under the DACA, and even cancel the DV lottery, otherwise known as green card lottery, altogether. 15 Deportation Defenses to Avoid Being Removed From the US (Even Trump Will Have No Choice But to Allow You to Stay) Under the presidency of Donald Trump, getting deported is more real than ever before. 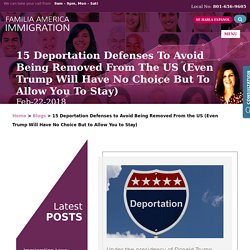 And it’s understandable why millions of folks who cross the U.S. border either illegally and legally are freaking out. If you’re afraid of getting deported one day at the time of strict immigration policies, crackdowns on illegal immigration, and the Wall, all made possible by the Trump administration, you can sleep peacefully – whenever you are, in California, Texas or Utah – as there are deportation defense attorneys who will fight for your rights day and night to help you and your family stay in the U.S. and avoid deportation. The Best Way for You to Get a Green Card.

Given the seemingly constant media coverage of President Trump’s opposition to immigration, and the resulting uncertainty for those who are in the United States and potentially facing deportation, it would be entirely understandable for you to worry about being removed from your home, job, and loved ones. 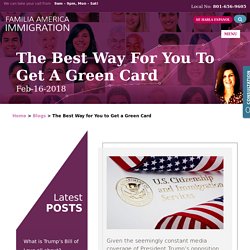 If you want to stay in the United States, and think you may qualify for a Green Card enabling you to remain where you are, a Salt Lake City green card attorney could advise you on the most appropriate method. Not only can an experienced immigration attorney provide this advice, they will be able to draw on their extensive knowledge and skills in the area to help make the process as smooth as possible. Before you contact an attorney to act on your behalf, you may want to read up on the various ways of getting a green card. What is Trump’s Bill of Love all about? Salt Lake City Immigration Attorney. The bill will allow young immigrants who came to the United States illegally to stay. 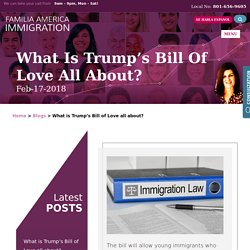 That sounds good! But it comes with the price. The president said he would protect these immigrants in exchange for border wall funding and other immigration changes. How Deportation Affects Immigrants Who Have Lived in the U.S. Most of Their Life. How would you feel if you were suddenly ordered to leave not only the place where you’ve grown up and lived your adult life, but also your spouse, partner, children, friends, and colleagues? At the very least, you’re likely to feel confused, lonely and probably more than little unsettled about your situation.

Trump Pitches Dreamers Legal Status in Exchange for Border Wall. It’s no secret that President Trump has been outspoken about his views on immigration, with his pledge to build a wall between the United States and Mexico being just one of his more memorable statements. Although this concept proved highly unpopular amongst most Americans, there’s a core group of Trump supporters who are most definitely in favor of it and continue to urge the President to go ahead with the plan.

On January 30, Trump made a speech which focused on the “loopholes” allegedly allowing dangerous criminals to enter the US, and how a border wall would help eradicate this problem, but offered something else in exchange for the wall – legal status for “dreamers”. Who Are These “Dreamers”? Dreamers, used in this context, refers to younger undocumented immigrants, who were brought into the United States as children. Federal Government Shutdown Can Affect Immigration Services. Due to the recent government shutdown, some USCIS operations will be affected until Congress authorizes funds. USCIS’s fee-funded activities are not affected and the offices still remain open so that applicants with scheduled appointments or interviews can attend as planned. Non-immigrant, as well as immigrant petitions, will continue to be processed. Familia America Immigration remains open as usual. Immigration Attorney Salt Lake City. Work visas in this category are very popular across the nation.

Thanks to the availability of H1B visas, many foreign workers are able to stay longer in the country and apply for multiple benefits every year. The broad requirements are the most important reason for its popularity. Most working visas require the visa holder to meet some important requirements such as having a master’s degree or invest a lot of money. Substance Abuse and Immigration. Foreign nationals are always encouraged to seek a better life in the United States. But what happens when these individuals are struggling with an addiction? Over the last years, there has been zero tolerance for allowing drug addicts involved in drug-related crimes to enter the country. Even jail can’t make addicts involved in criminal activity better. They need rehab or they will start again after being released from prison. USCIS Suspends Operations In Cuba. The United States and Immigration Services (USCIS) has recently suspended operations in Havana, Cuba.

The new changes involve the Cuban Adjustment Act (CAA) as well as the USCIS field office in Mexico City. Can you have dual citizenship in the United States? Immigration Attorney. What Does Trump’s Anti-Muslim Retweet Mean For Immigrants? Nothing good, our immigration attorneys warn. Last week, U.S. TPS Re-registration Now Open for Nicaraguan and Hondurans. The ABCs of US work visas. Foreign nationals interested in working in the United States can apply for a work visa. Trump Takes DACA Case to the Supreme Court. The Trump administration’s recent decision to end DACA has caused much debate and dissatisfaction among immigration advocates. Surviving deportation during the holidays.

‘Tis the season thousands of undocumented immigrants fear the most. Trump administration ends protective status for Haiti. Ways to avoid deportation. Many immigrants in the United States are awaiting removal hearings. Immigrants aren’t stealing American jobs. As millions of immigrants and refugees from all over the world pour legally or illegally into the United States, some American citizens fear they may be displaced from their jobs or their wages undercut by the government. Common US immigration challenges startup companies face. A waiver of inadmissibility may be your ticket. How Trump’s Immigration Reform Can Affect DACA (Dream Act)