Global Patent Filing offer a one-stop service for your global intellectual property in a hassle free manner, formality needs, including all filing requirements, monitoring and ancillary services like translation, searching and renewals. We have relationships with Global Law Firms that believe sincerely in the same philosophy along with ensuring that their costs are consistently very competitive.

Intellectual Property: A Business Asset. Introduction In this cut-throat competition and global market, “knowledge”, “idea” and its commercial use has turned up to be an essential and important asset for any business to succeed and flourish. 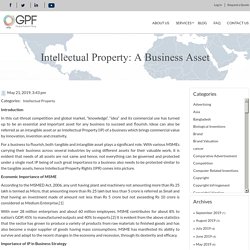 Ideas can also be referred as an intangible asset or an Intellectual Property (IP) of a business which brings commercial value by innovation, invention and creativity. For a business to flourish, both tangible and intangible asset plays a significant role. With various MSMEs carrying their business across several industries by using different assets for their valuable work, it is evident that needs of all assets are not same and hence, not everything can be governed and protected under a single roof. IP being of such great importance to a business also needs to be protected similar to the tangible assets, hence Intellectual Property Rights (IPR) comes into picture.

Can Ideas Be Patented? Introduction Patentability of an idea is one of the controversial topics faced during the grant of patents. 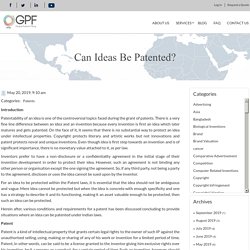 There is a very fine line difference between an idea and an invention because every invention is first an idea which later matures and gets patented. On the face of it, it seems that there is no substantial way to protect an idea under intellectual properties. Immersion Corporation Announces Litigation Settlement, Including Patent and Technology License Agreement. Leading innovators of haptics, Immersions was founded in 1993. 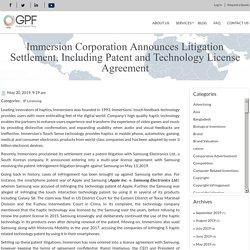 Recently, Immersions proclaimed its settlement over a patent litigation with Samsung Electronics Ltd., a South Korean company. It announced entering into a multi-year license agreement with Samsung resolving the patent-infringement litigation brought against Samsung on May 13, 2019. Author: Sonal Sodhani, Legal Intern at Global Patent Filing. 5G, “FRAND” and the IPR Regime. Recently in 2018, the Court of Appeal Judgement (UK) in Unwired Planet v Huawei Court of Appeal brought down various highlights regarding patent licensing further reflecting that it is truly complex in nature. 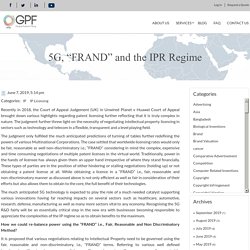 The judgment further threw light on the necessity of negotiating intellectual property licencing in sectors such as technology and telecom in a flexible, transparent and a level playing field. The judgment only fulfilled the much anticipated predictions of turning of tables further redefining the powers of various Multinational Corporations. SANCTIONS AGAINST CHINESE TELECOME GIANT HUAWEI. INTRODUCTION: Chinese telecom giant Huawei faced heat from ongoing trade war between the US and China, as the company has been barred from seeking any patent relief in the domicile of the US. 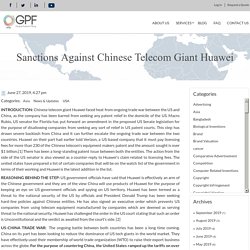 Macro Rubio, US senator for Florida has put forward an amendment in the proposed US Senate legislation for the purpose of disallowing companies from seeking any sort of relief in US patent courts. This step has drawn severe backlash from China and it can further escalate the ongoing trade war between the two countries. Huawei on their part had earlier told Verizon, a US-based company that it must pay licensing fees for more than 230 of the Chinese telecom's equipment makers patent and the amount sought is over $1 billion.[1] There has been a long-standing patent issue between both the entities. Integrating Defence with IPR (Mission Raksha Gyan Shakti)

The Mission Raksha Gyan Shakti was launched by the defence minister in 2018 the objectives it that the mission aimed at fulfilling are stated below. 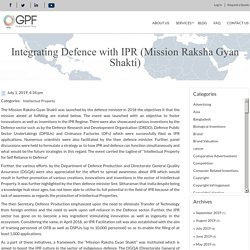 The event was launched with an objective to foster innovations as well as inventions in the IPR Regime. There were also showcased various inventions by the Defence sector such as by the Defence Research and Development Organisation (DRDO), Defence Public Sector Undertakings (DPSUs) and Ordnance Factories (OFs) which were successfully filed as IPR applications. Numerous scientists were also facilitated by the then defence minister. Further, panel discussions were held to formulate a strategy as to how IPR and defence can function simultaneously and what would be the future strategies in this regard. 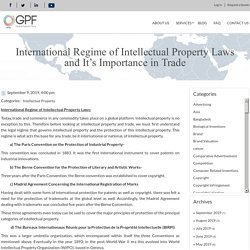 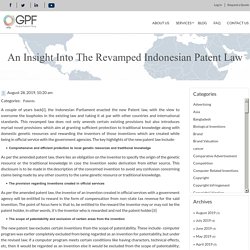 This revamped law does not only amends certain existing provisions but also introduces myriad novel provisions which aim at granting sufficient protection to traditional knowledge along with domestic genetic resources and rewarding the inventors of those inventions which are created while being in official service with the government agencies. Patent Pariah Or Patent Power. 1.1 Why was Huawei in the news? 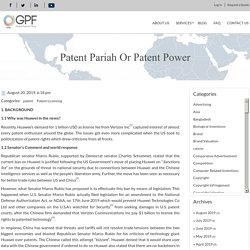 Recently, Huawee’s demand for 1 billion USD as license fee from Verizon Inc[1] captured interest of almost every patent enthusiast around the globe. The issues got even more complicated when the US took to politicization of patent rights which drew criticisms from all fronts. 1.2 Senator’s Comment and world response Republican senator Marco Rubio, supported by Democrat senator Charles Schummer, stated that the current ban on Huawei is justified following the US Government’s move of placing Huawei on “Sanctions list” on the grounds of threat to national security due to connections between Huawei and the Chinese intelligence services as well as the people’s liberation army.

Further, the move has been seen as necessary for better trade rules between US and China[2]. However, what Senator Marco Rubio has proposed is to effectuate this ban by means of legislation. 1.3 US-China trade War In 2018, the US - China trade deficit stood at around 419 billion USD. Apple’s Patent For Autonomous Vehicle’s Focused on Eliminating Blinding Light Glare.

Apple was granted 60 new Patents by the U.S. patent and Trademark Office in the month of July, 2019. 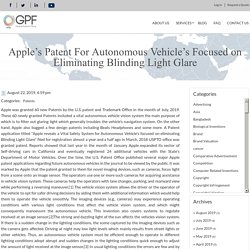 These 60 newly granted Patents included a vital autonomous vehicle vision system the main purpose of which is to filter out glaring light which generally troubles the vehicle’s navigation system. On the other hand, Apple also bagged a few design patents including Beats Headphones and some more. A Patent application titled “Apple reveals a Vital Safety System for Autonomous Vehicle's focused on eliminating Blinding Light Glare” filed for registration almost a year and a half ago in March, 2018 USPTO office was granted patent. Marketing Blunder By Xiaomi. Chinese Smartphone maker brand, Xiaomi faced an embarrassment recently as the company was caught copying artwork of artist Peter Tarka, famous for 3D Art. Global Patent Protection by globalpatentfilings. Introduction Intellectual Property Rights (IPR) of all types including patents have territorial jurisdiction.

Patent Wars And Frand Licensing by iiprd. The smartphone industry nowadays is branded by a myriad of patents and its litigations in terms of infringement. Many lawsuits have been filed by Apple, HTC, Microsoft, Motorola, Nokia, and Samsung. The lawsuits span cross several courts and several jurisdictions and they often put Apple or Microsoft on one side of the war and Google’s Android operating system—HTC, Motorola, and Samsung—on the other. Many of the smartphone patent litigations are fought over Standard Essential Patents Standards are central in development interoperability, and are normally set by standard-setting organizations (“SSOs” :These organizations works mainly on the use of standards in the making of goods and services that are safe, reliable and of good quality.

The standards help trade, increase efficiency while lessening errors and waste. like International Organization for Standardization. These technologies are classified as SEP (standard essential patents). Non-Patent Exclusivity in US & EU – global patentfilings. Non-patent exclusivity or Regulatory exclusivity is the core profit driver of the pharma industry. The rationale behind introducing regulatory exclusivity for drug products was that the amount of time taken to gain approval to market the drug product often leaves little viable protection period for the drug product under patents. Patents are often filed during the early developmental stage of the drug and approval from the authorities (FDA- Food and Drug Authority or EMEA-European Medicines Agency) often takes over a decade to come through, and that leaves the patent holder with a much lesser duration, and sometimes none, to actually avail a return on the huge investment in R&D.

A framework to grant exclusive marketing rights to the drug manufacturers was developed in the US by way of the Hatch-Waxman Act of 1984. Under this act exclusivity is granted to certain pharma products if they fulfill the requisites of the act. 1. 2. 3. 4. 5. 1. 2. 3. 4. National Phase Filing Services.

International Patent Filing USA. The Patent Law of United States was enacted even before the U.S. Constitution was adopted. Starting from colonial period to current period, U.S. Patent Law has came across various transformations and amendments.