How Do You Know If Someone Is Watching You Through Your Phone? The unfortunate reality is that your phone camera can be accessed and switched on without your consent. 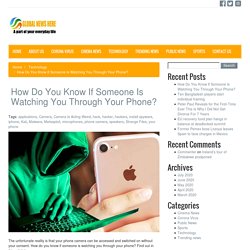 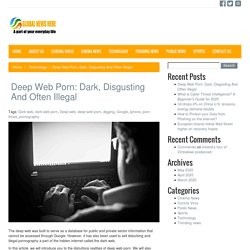 There’s been a surge of interest in cyber threat intelligence in recent years. 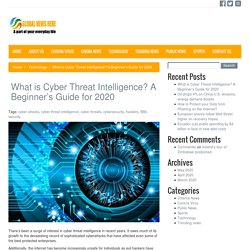 It owes much of its growth to the devastating record of sophisticated cyberattacks that have affected even some of the best-protected enterprises. Additionally, the internet has become increasingly unsafe for individuals as evil hackers have made online theft a source of income, making cyber threat intelligence such an important concept in the world of security. What is Cyber Threat Intelligence (CTI)? Threat intelligence is any knowledge that allows you to prevent or mitigate attacks. It enables you to understand the motivations, intentions, and competencies of your potential attackers. Cyber threat intelligence is the information collected, filtered and analyzed to answer essential questions regarding any cyber threats that an organization may face. 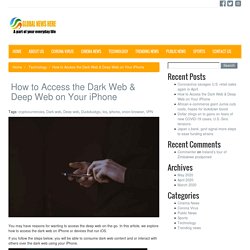 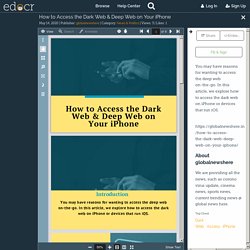 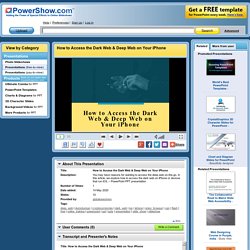 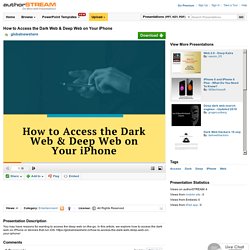 How to Access the Dark Web & Deep Web on Your iPhone PowerPoint Presentation - ID:9918008. Skip this Video Loading SlideShow in 5 Seconds.. 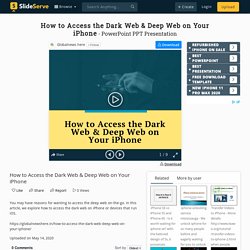 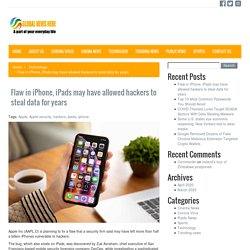 The bug, which also exists on iPads, was discovered by Zuk Avraham, chief executive of San Francisco-based mobile security forensics company ZecOps, while investigating a sophisticated cyberattack against a client in late 2019. Avraham said he found evidence the vulnerability was exploited in at least six cybersecurity break-ins. An Apple spokesman acknowledged that a vulnerability exists in Apple’s software for email on iPhones and iPads, known as the Mail app, and that the company had developed a fix, which will be rolled out in a forthcoming update on millions of devices it has sold globally. Top 10 Most Common Passwords You Should Avoid. Number Passwords There are a lot of numeric numbers that are highly predictable. 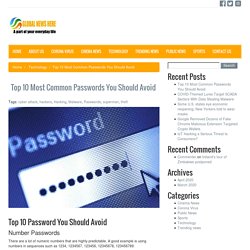 A good example is using numbers in sequences such as 1234, 1234567, 123456, 12345678, 123456789. Also, avoid using numeric numbers with repeated digits as your password. For instance, 111111, 000000, 7777, 2000, 1212. These are very predictable! Additionally, avoid combining these digits with repeated alphabets. Computer Keyboard Sequence. COVID-Themed Lures Target SCADA Sectors With Data Stealing Malware. A new malware campaign has been found using coronavirus-themed lures to strike government and energy sectors in Azerbaijan with remote access trojans (RAT) capable of exfiltrating sensitive documents, keystrokes, passwords, and even images from the webcam. The targeted attacks employ Microsoft Word documents as droppers to deploy a previously unknown Python-based RAT dubbed “PoetRAT” due to various references to sonnets by English playwright William Shakespeare.

“The RAT has all the standard features of this kind of malware, providing full control of the compromised system to the operation,” said Cisco Talos in an analysis published last week. According to the researchers, the malware specifically targets supervisory control and data acquisition (SCADA) systems in the energy industry, such as wind turbine systems, whose identities are currently not known. How Does Dark Web Monitoring Work? - Global News Here. Two common misconceptions are that dark web monitoring can remove identifying information from the darknet and prevent the sale of this data. The truth is that dark web monitoring will only alert you when your information is found on the internet.

Moreover, the provider of this service might offer advice on what you can do to prevent cybercriminals from stealing your data in the future. Examples of services are Norton LifeLock and Experian. Some U.S. states eye economic reopening; New Yorkers told. As some U.S. states look to start reopening their coronavirus-battered economies amid protests from supporters of President Donald Trump anxious to get back to work, hardest hit New York state began mandating the wearing of masks or face coverings in public to contain the pathogen’s spread. Saturday ends another week in which millions of Americans went without paychecks. More than 20 million have filed for unemployment benefits in the past few weeks alone as closures of businesses and schools and severe travel restrictions to try to curb the highly contagious virus have hammered the U.S. economy.

The malicious extensions have all functions almost identically to the true extensions, but any data entered by a victim during configuration is sent to one of the attackers’ servers or to a Google Form. However, user identity abuse doesn’t happen instantly. In an experiment, Denley said he inserted the test account credentials into one of the malicious extensions, but the funds were not stolen immediately. Denley claims, however, the robbery is happening. IoT Hacking a Serious Threat to Consumers? - Global News Here.

Imagine a hacker attacking thousands of self-automated vehicles to harm passengers. This hacker would take over all the car operations allowing him to control functions like acceleration, the opening of doors, and steering. While most cyberattacks will only lead to loss of money and data, such an attack could lead to disabilities and even loss of lives. This is what makes IoT hacking a potentially serious threat. Turkish fruit, vegetable farmers wary as closed borders slice prices. A sharp drop in the price of fruits and vegetables could force Turkish farmers to trim output this spring as the coronavirus pandemic slows exports and reduces the needs of restaurants and shops, food industry executives say. Turkey, ninth globally in confirmed cases of the COVID-19 disease, is among the world’s top exporters of fresh produce such as tomatoes, apricots, tangerines, eggplants and peppers.

But in March, heading into the planting season, prices dropped 6.6% for fruits and vegetables, according to year-over-year consumer price data. U.S. officials: North Korea hacking threatens U.S. and global financial. U.S. government officials warned on Wednesday about the threat of North Korean hackers, calling particular attention to banking and other finance. The reason for the advisory – which was jointly issued by the U.S. Departments of State, Treasury, and Homeland Security, and the Federal Bureau of Investigation – was unclear. North Korean hackers have long been accused of targeting financial institutions, and the content of the warning appeared to draw on material already in the public domain. Requests for comment sent to the U.S. agencies were not immediately returned.

The North Korean mission to the United Nations in New York did not immediately respond to a request for comment. Britain was too slow to act on COVID-19, opposition leader says. The leader of Britain’s opposition Labour Party said on Wednesday that the government had been too slow to impose a lockdown to counter the spread of the novel coronavirus and so could end up having the worst death rate in Europe Prime Minister Boris Johnson initially refrained from approving the stringent controls that other European leaders imposed but then closed down the country when projections showed a quarter of a million people could die in the United Kingdom. So far, more than 12,868 people with COVID-19 have died in British hospitals, though new official data indicates the true death toll could be much larger.

Wall Street set for gains as JPMorgan, J&J kick off earnings. Wall Street’s main indexes were set to open higher on Tuesday as the quarterly earnings season began in earnest with JPMorgan Chase and Johnson & Johnson offering the first glimpse of the coronavirus outbreak’s impact on corporate America. Profits at JPMorgan Chase & Co (JPM.N) and Wells Fargo & Co (WFC.N) plunged in the first quarter, as both banks set aside billions of dollars to cover potential loan-losses from the pandemic. Amazon warehouse worker in Queens tests positive for coronavirus. Amazon to add 75,000 jobs as online orders surge during lockdowns. Amazon.com Inc (AMZN.O) said on Monday it would hire 75,000 more people for jobs ranging from warehouse staff to delivery drivers as the coronavirus epidemic keeps Americans locked in their homes and demand for online orders surge.

Top 7 PayPal Scams to Be Aware of in 2020 - Global News Here. Dutch police take down 15 DDoS services in a week. Is Whatsapp Safe To Use And How To Prevent From Hacking. Is WhatsApp Safe? According to Facebook, WhatsApp’s end-to-end encryption ensures that only you and the recipient can read a message. Facebook states that it does not have access to the messages you send and receive. When you first open WhatsApp on your phone, two keys are generated: a public and private key. The user keeps the private key while WhatsApp sends the public key to the receiver via a centralized server. 5 Home Upgrades That Are Totally Worth It - Global News Here. Your home is more than just four walls and a roof — it’s the place where you make memories, entertain, and find comfort.

Gambling Company: SBTech place $30 million to deal with Cyber Attacks. The online betting firm SBTech would need to reimburse $30 million for covering the effects of a suspected ransomware attack. The company agreed to do so in re-negotiated procurement terms with Diamond Eagle Acquisition Corporation (DEAC), a blank check firm that has purchased SBTech and the rival DraftKings site. DEAC requested that SBTech would put 10 million dollars in cash and 20 million dollars over the next two years in an escrow fund in a report from the United States Stock Exchange Commission.

The funds will be used to cover any damages resulting from a “cyber-security incident” on March 27. As Legal Sports Report reported at the time, SBTech’s website was down in an incident that looked like an invasion of classic ransomware. Hundreds of sites by third parties focused on SBTech’s sports wagering, and an online casino network has been discontinued. This was almost a week before SBTech began serving foreign clients, but not its US customers. Top 10 Best Hidden Deep & Dark Web Search Engines Of 2020.