DIY kimono + pretty ways to style it. I’ve been loving this fun trend, but have yet to try make one! 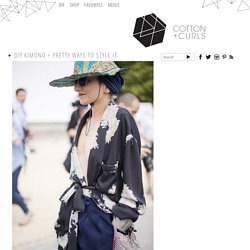 So, I’m planning on making one soon and until then…you guys can make one for yourself! Smiling Fox Forge Chatelaines. How to Make Ribbon Bows for Victorian Costumes. Ribbon Bow with Streamers I’ve had quite a lot of costumers ask me recently about making bows for bustle dresses. 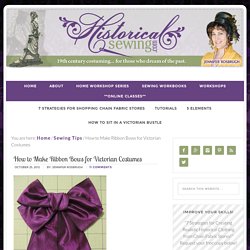 Since bows are THE Victorian trim this tutorial will work for most 19th century garments. This video tutorial will show you how to make one up quickly. Back of hand made ribbon bow Use any size ribbon for these bows. Finished Ribbon Bow Be creative too. Satin Ribbon Rose Tutorial. When January rolled around this year, I was overtaken by the urge to learn to sew. 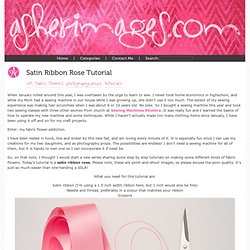 I never took home economics in highschool, and while my Mom had a sewing machine in our house while I was growing up, she didn’t use it too much. The extent of my sewing experience was making hair scrunchies when I was about 9 or 10 years old. No joke. So I bought a sewing machine this year and took two sewing classes with three other women from church at Sewing Machines Etcetera. It was really fun and I learned the basics of how to operate my new machine and some techniques. Enter: my fabric flower addiction. I have been reeled in hook, line and sinker by this new fad, and am loving every minute of it. So, on that note, I thought I would start a new series sharing some step by step tutorials on making some different kinds of fabric flowers. What you need for this tutorial are: And we’re ready to begin!

Rare glimpse of Victorian London's working class captured by street photographer. John Thomson / Courtesy Dominic Winter Auctioneers 'Crawlers', one of a series of pictures of 19th century London by pioneering street photographer John Thomson. Ben Cavanna / Courtesy Dominic Winter The volume of Street Life in London containing 36 of John Thomson's photographs that will be sold at auction on Thursday. By Yuka Tachibana, Producer, NBC News A book of photographs depicting the grueling poverty lived by many residents of Victorian London is due to be auctioned on Thursday. "In or around 1877, photography was mainly about beautiful landscapes or portraits of the wealthy, but these images [photographer John] Thomson deliberately set out to take were those of the Victorian underclass," John Trevers of auctioneers Dominic Winter told NBC News. 1840's Dress Progress - Kinda. So far this week I have spent a little time each day working on the bodice of the 1840's dress. 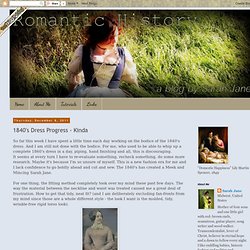 And I am still not done with the bodice. For me, who used to be able to whip up a complete 1860's dress in a day, piping, hand finishing and all, this is discouraging. It seems at every turn I have to re-evaluate something, recheck something, do some more research. Maybe it's because I'm so unsure of myself. This is a new fashion era for me and I lack confidence to go boldly ahead and cut and sew. For one thing, the fitting method completely took over my mind these past few days. Ladies' Patterns page 3.

A polonaise is a Polish word for a dress with a tight bodice and a short skirt divided in front and looped, or drawn back, over a longer skirt. 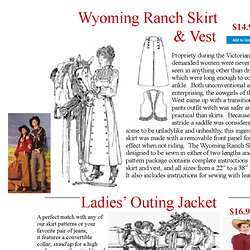 The polonaise was worn in the 1870’s and 80’s, but was actually a revival of a late 1700’s style worn in Europe and was the national costume of Poland. Typically, the bodice was very full in the rear and is supported by a bustle (included in our pattern). The full sides are called panniers. (Like the bags on a pack-horse!) The fit of the bodice should be tight and worn with a corset thus it is necessary to tailor fit during construction over a corset. For those “loose women” who refuse to wear a corset, the pattern includes a boned version to produce the same smooth silhouette.

The Polonaise can be made in calico for a casual look or in silk or taffeta for a more formal appearance. The Polonaise pattern package includes Polonaise, skirt, bustle, and both a high-neck and V-neck versions. 07.21.13: A Street Photographer of 19th Century London. Street photography has always held a special interest for me. 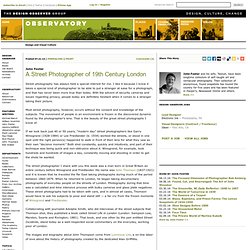 I like it because I know it takes a special kind of photographer to be able to put a stranger at ease for a photograph, and that has never been more true than today. With the advent of security cameras and issues regarding privacy, people today are definitely hesitant when it comes to a stranger taking their picture. Most street photography, however, occurs without the consent and knowledge of the subjects.

The movement of people in an environment is frozen in the discovered dynamic found by the photographer's lens. That is the beauty of the great street photographs I know of. If we look back just 40 or 50 years, “modern day” street photographers like Garry Winogrand (1928-1984) or Lee Friedlander (b. 1934) worked the streets, or stood in one spot until the right person(s) happened to walk in front of their lens for what they saw as their own “decisive moment.” Photographer: John Thomson The Cheap Fish Of St.