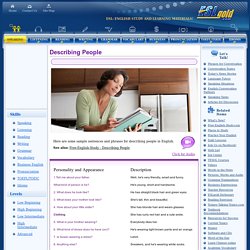 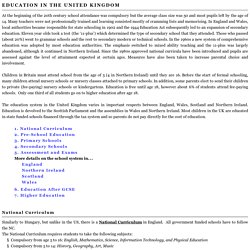 Many teachers were not professionally trained and learning consisted mostly of cramming lists and memorising. In England and Wales, local authorities became responsible for state schooling in 1902 and the 1944 Education Act subsequently led to an expansion of secondary education. Eleven year olds took a test (the ‘11-plus’) which determined the type of secondary school that they attended. Those who passed (about 20%) went to grammar schools and the rest to secondary modern or technical schools. 12 'What do you look like?' Song (Describing People) English on Tour. Physical Description. Dialogues: Introducing yourself and others. Maybe you just stand there and don't really know how to begin when you want to introduce yourself or someone else to an English native speaker. 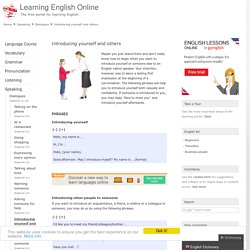 Your intention, however, was to leave a lasting first impression at the beginning of a conversation. The following phrases will help you to introduce yourself both casually and confidently. If someone is introduced to you, you may reply "Nice to meet you" and introduce yourself afterwards. Introductions & Greetings - Learn English Conversation. Learn English - Introduce Yourself in English - Innovative English. Objective: Asking for and giving personal information. by Allan Daniel Chacón Castro on Prezi. English Course for Beginners - Giving Personal Information.

LAURA'S ENGLISH BLOG. Asking for and giving personal information. Pop Lyrics. Learn English Basics - Appearances and Describing People in English. Lenka - Everything At Once. 37 English Words for Describing a Person’s Appearance. Vocabulary Builder Course In this lesson you’re going to expand your vocabulary with 37 words to describe a person’s appearance. 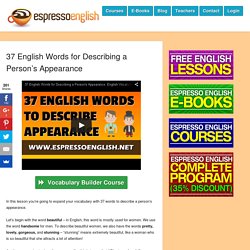 Let’s begin with the word beautiful – in English, this word is mostly used for women. We use the word handsome for men. To describe beautiful women, we also have the words pretty, lovely, gorgeous, and stunning – “stunning” means extremely beautiful, like a woman who is so beautiful that she attracts a lot of attention! Another expression to describe a woman like this is to say that “She turns heads” – implying that when she walks down the street, people turn their heads to focus their attention on her. Describing people. Describing people - exercises - personality - appearance. 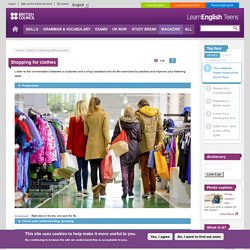 Customer: Yes, have you got this T-shirt in other colours? Shop assistant: We’ve got it in white, black, red and purple. What size do you want? ESL - Shopping for clothes. Zestawienie czasow. 22105 ket vocabulary list.