The Anti-Communist Crusade and the Rise of McCarthyism. How McCarthyism Worked" Mass hysteria has reared its ugly head for as long as humans have existed. 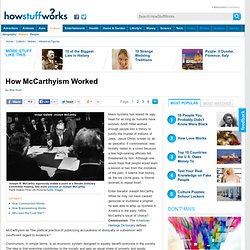 Adolf Hitler worked enough people into a frenzy to justify the murder of millions of Jews. Jesus Christ, known by all as peaceful, if controversial, was brutally nailed to a cross because a few high-ranking officials felt threatened by him. Committee On Un-American Activities. A History of Witchcraft Persecutions. Outbreaks of witchcraft hysteria, with subsequent mass executions, began to appear in the early 1500s. 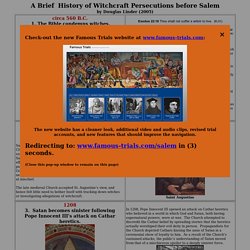 Authorities in Geneva, Switzerland burned 500 acccused witches at the stake in 1515. Nine years later in Como, Italy, a spreading spiral of witchcraft charges led to as many as 1000 executions. The Reformation divided Europe between Protestant regions and those loyal to the Pope, but Protestants took the crime of witchcraft no less seriously--and arguably even more so--than Catholics. Germany, rife with sectarian strife, saw Europe's greatest execution rates of witches--higher than those in the rest of the Continent combined. Salem Massachusetts - What about Witches The Witch Trials. Examination of a Witch, by T.H. 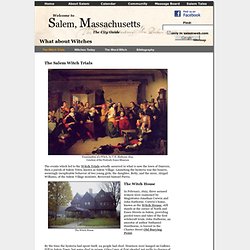 Matteson 1853. Courtesy of the Peabody Essex Museum The events which led to the Witch Trials actually occurred in what is now the town of Danvers, then a parish of Salem Town, known as Salem Village. Salem Witch Trials of 1692: Facts, History & Causes. While the term 'witch-hunt' has become part of our common vocabulary, it has roots in the hysteria that befell Salem Village, Massachusetts, at the close of the seventeenth century. 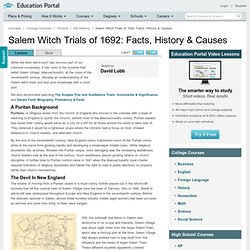 Develop an understanding of the Salem witch trials and test your knowledge with a short quiz. A Puritan Background. Digital History. Decoding the Salem Witch trials, Part 1. The witch trials that took place in Salem, Massachusetts Bay Colony, in 1692 represent the most famous Puritan moment in American history; it is the one thing most people think of when they think of the New England Puritans. 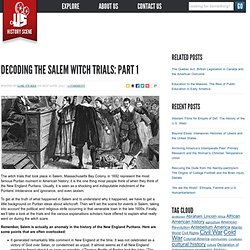 Usually, it is seen as a shocking and indisputable indictment of the Puritans’ intolerance and ignorance, and even sexism. To get at the truth of what happened in Salem and to understand why it happened, we have to get a little background on Puritan ideas about witchcraft. Then we’ll set the scene for events in Salem, taking into account the political and religious strife occurring in that venerable town in the late 1600s. Salem Witchcraft: the Events and Causes of the Salem Witch Trials. By Tim Sutter © 2000-2003 What caused the Salem witch trials of 1692? 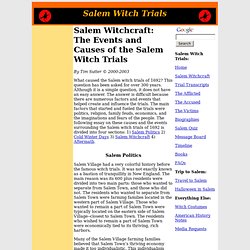 This question has been asked for over 300 years. Although it is a simple question, it does not have an easy answer. Adolescent Girl Hysteria. Mass Hysteria Develops in New York Teenagers. Salem Witch Trials. Mass Delusions and Hysterias: Highlights from the Past Millennium. Article Robert E. 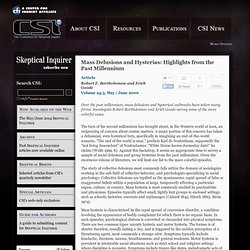 Bartholomew and Erich Goode Volume 24.3, May / June 2000 Over the past millennium, mass delusions and hysterical outbreaks have taken many forms.