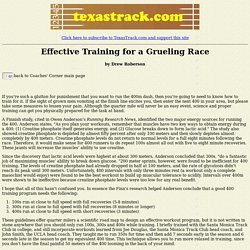 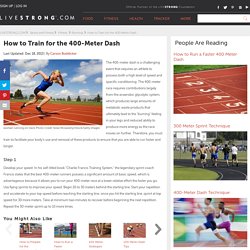 The 400-meter race requires contributions largely from the anaerobic glycolytic system, which produces large amounts of metabolic waste products that ultimately lead to the "burning" feeling in your legs and reduced ability to produce more energy as the race moves on further. Therefore, you must train to facilitate your body's use and removal of these products to ensure that you are able to run faster and longer. Develop your speed. In his self-titled book "Charlie Francis Training System," the legendary sprint coach Francis states that the best 400-meter runners possess a significant amount of basic speed, which is advantageous because it allows you to run your 400-meter race at a lower relative effort the faster you go. Use flying sprints to improve your speed. Youtube%20Sprinttraining.pdf. Running Videos, Running Races and Track and Field Videos : Flotrack - Track is Back - Flotrack. 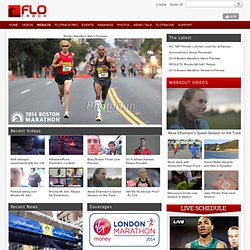 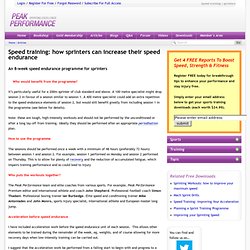 It’s particularly useful for a 200m sprinter of club standard and above. A 100 metre specialist might drop session 2 in favour of a session similar to session 1. A 400 metre specialist could add an extra repetition to the speed endurance elements of session 2, but would still benefit greatly from including session 1 in the programme (see below for details). Note: these are tough, high-intensity workouts and should not be performed by the unconditioned or after a long lay-off from training. Ideally they should be performed after an appropriate periodisation plan. How to use the programme The sessions should be performed once a week with a minimum of 48 hours (preferably 72 hours) between session 1 and session 2. Recovery and the reduction of accumulated fatigue, which impairs training performance and so could lead to injury Who puts the workouts together?

The Peak Performance team and elite coaches from various sports. Speed training for sprinters: sprinting exercises should be performed throughout the entire training year. Most sprint athletes tend to use a ‘long to short’ training approach, where they perform slower aerobic and anaerobic work at the beginning of the training year and then progress to faster and faster anaerobic work as the season approaches and during the season itself. 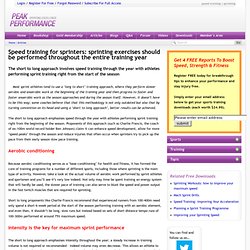 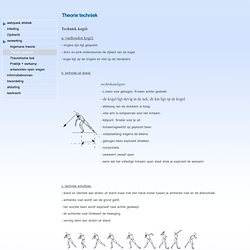 400 Meter Track Training. In 2009, the International Association of Athletics Federations’ male and female athletes of the year and coach of the year were linked to the 400 meter race. 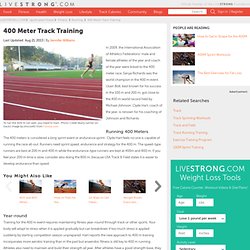 Sanya Richards was the world champion in the 400 m event. Usain Bolt, best known for his success in the 100 m and 200 m, got close to the 400 m world record held by Michael Johnson. Clyde Hart, coach of the year, is renown for his coaching of Johnson and Richards. The 400 meters is considered a long sprint event or endurance sprint . Clyde Hart feels no one is capable of running the race all-out. Training for the 400 m event requires maintaining fitness year-round through track or other sports. Hart breaks his training program into four periods. In a single day Hart’s runners often do one or more types of workouts. 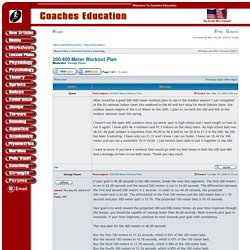