Oggetti in azione: semiotica degli oggetti : dalla teoria all'analisi - Michela Deni. Our gadgets are getting mouthy - CNET. In a corner of LG's sprawling, dripping-with-technology booth at the Las Vegas Convention Center sat a circular table populated by a group of small, futuristic snowmen. 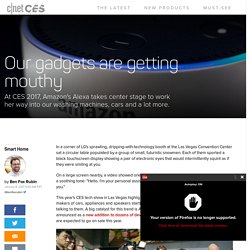 Each of them sported a black touchscreen display showing a pair of electronic eyes that would intermittently squint as if they were smiling at you. On a large screen nearby, a video showed one of these gizmos, the LG Hub Robot, calling out in a soothing tone: "Hello. I'm your personal assistant at home. I learn your lifestyle to better serve you. " This year's CES tech show in Las Vegas highlighted how our technology is finding its voice, with makers of cars, appliances and speakers starting to let people control their products simply by talking to them. Apple Watch lead sags as smartwatch market sinks - CNET. 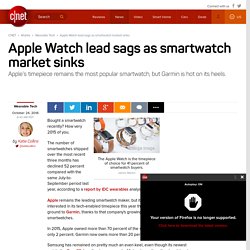 How very 2015 of you. The number of smartwatches shipped over the most recent three months has declined 52 percent compared with the same July-to-September period last year, according to a report by IDC wearables analysts. Apple remains the leading smartwatch maker, but it has also seen fewer people interested in its tech-enabled timepiece this year than in 2015. It has lost significant ground to Garmin, thanks to that company's growing portfolio of fitness-focused smartwatches. In 2015, Apple owned more than 70 percent of the smartwatch market and Garmin only 2 percent. Samsung has remained on pretty much an even keel, even though its newest watch, the Gear S3, hasn't yet gone on sale. Google’s Going to Change the Gadget Game, But Not Like You Think. If you add them all up, Google actually makes a lot of gadgets. 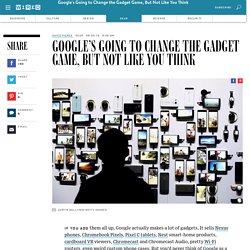 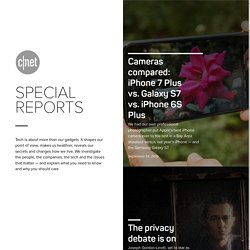 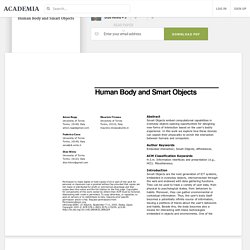 Radical atoms: beyond tangible bits, toward transformable materials. interactions 19, 1 (January 2012), 38-51. 6. James J. The 9 most fascinating gadgets at IFA 2015. BERLIN -- In the technology trade show calendar, IFA is the most misunderstood. 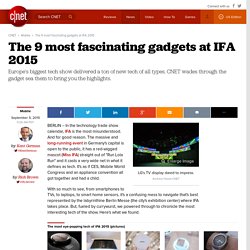 And for good reason. L Immaginario Tecnologico in “XXI Secolo” The Internet of Things: Sizing up the opportunity. The semiconductor industry has been able to weather the fallout from the global financial crisis and realize several years of healthy growth—in part because of the widespread adoption of smartphones and tablets, which created demand for mobile and wireless applications. 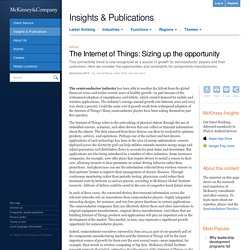 The industry’s average annual growth rate between 2010 and 2013 was about 5 percent. Could the same sort of growth result from widespread adoption of the Internet of Things? Many semiconductor players have been asking themselves just this question. Dress becomes increasingly transparent as its wearer share personal data online. X.pose is a wearable data-driven sculpture that exposes a person’s skin as a real-time reflection of the data that the wearer is producing. 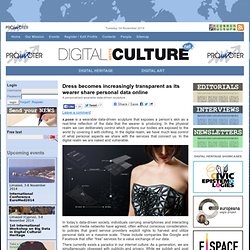 In the physical realm we can deliberately control which portions our bodies are exposed to the world by covering it with clothing. In the digital realm, we have much less control of what personal aspects we share with the services that connect us. In the digital realm we are naked and vulnerable. In today’s data-driven society, individuals carrying smartphones and interacting with social media networks have agreed, often without conscious consideration, to policies that grant service providers explicit rights to harvest and utilize personal data on a massive scale. These include companies like Google and Facebook that offer “free” services for a value exchange of our data.

There currently exists a paradox in our internet culture. X.pose is my exploration of these questions. Production. Enchanted Objects: Design, Human Desire, and the Internet of Things: David Rose: 9781476725635: Amazon.com: Books. New Shape of Things. How Google and Nest could get the smart home all wrong. Welcome to the Google smart home: You walk up your steps and use your Android device (or iOS app) to open your smart lock and signal to the network that you've arrived, whereupon your Nest thermostat turns the heat up to a comfy 71 degrees and Nest smart lights adjust the brightness to optimize energy use. 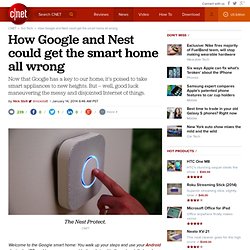 Google’s Location History Browser Is A Minute-By-Minute Map Of Your Life. Quick! 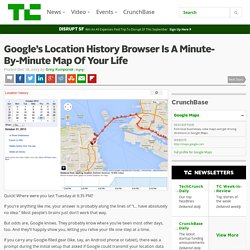