Forbidden Love: Steven Colver and Tylar Witt — Verdict and Sentencing. From left: attorney Mark Ralphs, Tylar Witt, attorney Dain Weiner and Steven Colver After less than a day of deliberations, the jury came back with its verdict on June 15, 2011 — exactly two years after Joanne Witt's corpse was discovered. 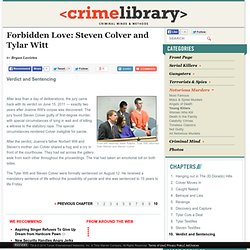 The jury found Steven Colver guilty of first-degree murder, with special circumstances of lying in wait and of killing a witness to the statutory rape. The special circumstances rendered Colver ineligible for parole. After the verdict, Joanne's father Norbert Witt and Steven's mother Jan Colver shared a hug and a cry in front of the courthouse. Edward Snowden's worst fear has not been realised – thankfully. This column was written by Glenn Greenwald for the Guardian's newspaper edition In my first substantive discussion with Edward Snowden, which took place via encrypted online chat, he told me he had only one fear. 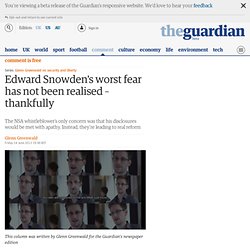 It was that the disclosures he was making, momentous though they were, would fail to trigger a worldwide debate because the public had already been taught to accept that they have no right to privacy in the digital age. Snowden, at least in that regard, can rest easy. The fallout from the Guardian's first week of revelations is intense and growing. If "whistleblowing" is defined as exposing secret government actions so as to inform the public about what they should know, to prompt debate, and to enable reform, then Snowden's actions are the classic case. Stupid Criminal Tricks – cars, cameras, and dog hair. Missoula, Montana police recently put the bite on a serial car thief, with help from his cell phone — and his dog. 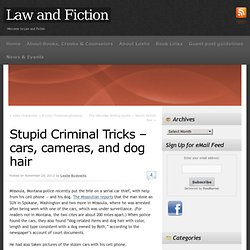 The Missoulian reports that the man stole an SUV in Spokane, Washington and two more in Missoula, where he was arrested after being seen with one of the cars, which was under surveillance. (For readers not in Montana, the two cites are about 200 miles apart.) Media.proquest.com/media/pq/classic/doc/2998581681/fmt/pi/rep/NONE?hl=&cit%3Aauth=Fisher%2C+Louis&cit%3Atitle=The+Law%3A+Military+Operations+in+Libya%3A+No+War%3F+No+Hostilities%3F&cit%3Apub=Presidential+Studies+Quarterly&cit%3Avol=42&cit%3Aiss=1&cit%3Apg. UK Newspaper - Profile. Consolidated Animal Crimes Bill for New York. List Of Illegal Drugs. What are Illegal Drugs? 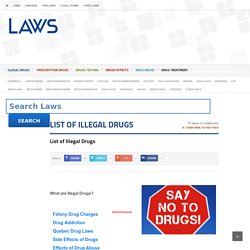 Illegal drugs are substances, which an individual, by law, is not allowed to possess, use or distribute. The penalties attached to such use as associated with illegal drugs are dependent on the type of drug, the location in which the individual was arrested or detained, the quantity of the drug and the presence of prior arrests for a similar offense. Illegal drugs are often addictive and deadly in nature; illegal drugs are often damaging to an individual’s mental state and physical healthy. The classification of which drugs are considered legal or illegal will vary from country to country. Border Reporter – News That Crossed The Line » News and tales from the U.S.-Mexico border, covering immigration, politics, organized crime, Homeland Security, corruption and drug trafficking.

Types of prison sentences. UNIVERSAL HUMAN RIGHTS INDEX. Overcriminalization and the Constitution. Abstract: Although the Constitution’s great structural principles of federalism and separation of powers are designed to guard against the abuse of governmental power and secure individual liberty, Congress routinely flouts these constitutional safeguards by enacting vague, overly broad, and other improper and unconstitutional criminal laws. 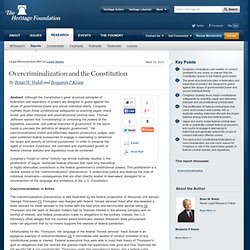 Thomas Jefferson warned that “concentrating” or combining the powers of the legislative, executive, and judicial branches of government “in the same hands is precisely the definition of despotic government.” Yet overcriminalization invites and effectively requires prosecutors, judges, and even unelected federal bureaucrats to engage in lawmaking to determine the scope and severity of criminal punishment. Non-lethal weapon. A U.S. 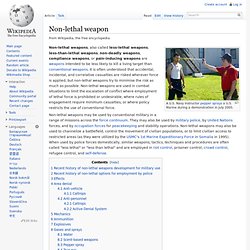 Navy instructor pepper sprays a U.S. Marine during a demonstration in July 2005. Non-lethal weapons, also called less-lethal weapons, less-than-lethal weapons, non-deadly weapons, compliance weapons, or pain-inducing weapons are weapons intended to be less likely to kill a living target than conventional weapons. It is often understood that accidental, incidental, and correlative casualties are risked wherever force is applied, but non-lethal weapons try to minimise the risk as much as possible. Woman Is Held in Death of Man Pushed Onto Subway Tracks in Queens. Our Future, Together. Is a Water Market privatization or not? Ecojustice Lawyer Randy Christensen is sounding the alarm bell warning that the government’s current efforts to modernize the Water Act could open the door to privatization of BC’s water (and that alarm has recently been picked up by the Council of Canadians). 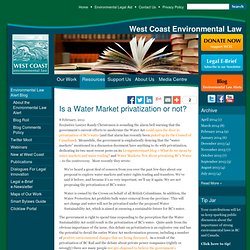 Meanwhile, the government is emphatically denying that the “water markets” mentioned in a discussion document have anything to do with privatization, dedicating its two most recent posts on its Livingwatersmart blog – What do we mean by water markets and water trading? And Water Markets: Not about privatizing BC’s Water – to the controversy. Most recently they wrote:

Sociology Of Deviance And Crime. Sociologists who study deviance and crime examine cultural norms, how they change over time, how they are enforced, and what happens to individuals and societies when norms are broken. 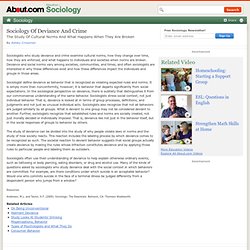 Deviance and social norms vary among societies, communities, and times, and often sociologists are interested in why these differences exist and how these differences impact the individuals and groups in those areas. Sociologist define deviance as behavior that is recognized as violating expected rules and norms. It is simply more than nonconformity, however; it is behavior that departs significantly from social expectations. Www.phila.gov/districtattorney/pdfs/grandjurywomensmedical.pdf. Getting Away with Torture. Avoid using unfair business practices against consumers.

Crime, État et société à la fin du Moyen Âge. Detroit's Staggering Murder And Violent Crime Rate Are 'A Public Health Issue'. Following news that Detroit was exiting bankruptcy and officials talking with optimism about the road ahead, grim new statistics drive home how much there is to do before the city’s future truly appears bright. 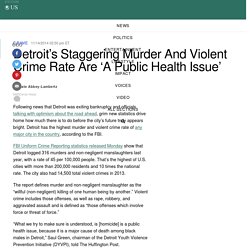 Detroit has the highest murder and violent crime rate of any major city in the country, according to the FBI. FBI Uniform Crime Reporting statistics released Monday show that Detroit logged 316 murders and non-negligent manslaughters last year, with a rate of 45 per 100,000 people. That’s the highest of U.S. cities with more than 200,000 residents and 10 times the national rate.

Williamsinstitute.law.ucla.edu/wp-content/uploads/AFSP-Williams-Suicide-Report-Final.pdf. Are You Being Stalked? Copyright © 1994 - 2014Privacy Rights Clearinghouse This is for informational purposes only. 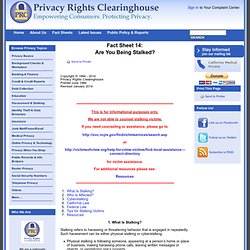 We are not able to counsel stalking victims. It Was No Compliment to Call Bill Clinton 'The First Black President' In 1998, Toni Morrison wrote a comment for The New Yorker arguing that “white skin notwithstanding, this is our first black President. Blacker than any actual black person who could ever be elected in our children’s lifetime.” Last week the New York Times, implicitly cited Morrison’s piece, and claimed the author was giving Clinton “a compliment.” This interpretation of Morrison’s claim is as common as it is erroneous.

The popular interpretation of Morrison’s point (exhibited here) holds that, summoning all of her powers, the writer gazed into the very essence of Clinton, and found him sufficiently soulful. In fact, Morrison’s point had little to do with soul of any kind. Hiding HIV/AIDS shouldn't be a crime, doctors argue. Prosecuting HIV-positive people for not disclosing their status to their sexual partners stigmatizes those with HIV/ AIDS and those most at risk of contracting the virus and doesn't protect people from becoming infected, a respected Canadian doctor argues in an article in the Canadian Medical Association Journal. In an opinion piece published Monday, Dr. Julio Montaner and two of his colleagues at the B.C. Centre for Excellence in HIV/ AIDS at St. Digest Comment: Re-Conceptualizing Copyright in Virtual Worlds. By Matthew BeckerEdited by Matt GelfandEditorial Policy The application of copyright in the space of virtual worlds has been a subject of increasing consideration in the legal community over the past few years.

[i] Literature on this subject has often centered on two focal points: the existing laws and approaches that are likely to produce successful litigation in this evolving arena; and the idea that the best approach to settling copyright disputes might be to try to find recourse through the entity that owns and operates the virtual world, rather than through litigation. FAMOUS DETECTIVES - MurderMysteries.com. Who Owns Public Crime Data? We were recently tipped off to a case in the federal courts that raises all sorts of legal issues about some questionable interpretations of the law -- many of which we've discussed here recently.

It involves a Utah company, named Public Engines, suing a competitor, named Report See. Public Engines, it appears, contracts with various police departments around the country to get crime data from them, and then they put that data online in various formats. Its main business tends to be working with law enforcement and providing them software and services around that data. But, it also presents the data publicly on the site CrimeReports.com. Apparently, law enforcement agencies pay Public Engines to provide data to the site. IBM SPSS Crime Prediction and Prevention. Ouverture d'une enquête après un incident à la centrale de Cattenom. Crime, Law and Social Change, Volume 39, Number 1. #TheGreatListen 2015. We are excited to use the new StoryCorps app to bring the country together in a project of listening, connection and generosity. Together we will collect the wisdom of a generation and archive it for the future, while at the same time reminding our grandparents how much their lives and stories matter.

Army scientists secretly sprayed St Louis with 'radioactive' particles for YEARS to test chemical warfare technology. The feds have resumed a controversial program that lets cops take stuff and keep it. DNA Evidence Clears Two Men in 1983 Murder - NYTimes.com. Extreme Beliefs Often Mistaken for Insanity, New Study Finds. My Four Months as a Private Prison Guard: A Mother Jones Investigation. 13 Things the Government Is Trying to Keep Secret From You - Page 2 of 2. Did Google need ethical approval for NHS patient data deal? Cops talk about life After Prohibition. Are You Feeling Irritated Due To The Traffic Ticket You Received Lately ? ~ Colorado Law Experts - The Law Offices Of Steven J. Pisani. Concealed carry in the United States.