Bullring - Selfridges. Housed in a truly iconic modern building, Selfridges at Bullring is every bit as special on the inside. 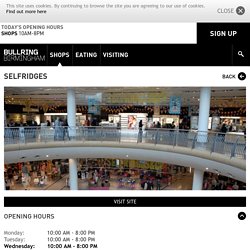 The iconic store which has earned its place as an architectural landmark for its Paco Rabanne-inspired exterior, is the ultimate destination for shopping in the Midlands, with an unrivalled exclusive fashion, beauty, food and home offering. Home to some of the world’s most established designers, Selfridges is the go-to store for hot-off-the-catwalk fashion, with hundreds of high-end brands boasting items that cannot be found anywhere else in the city.

With four floors, featuring everything from clothing, footwear and accessories through to stationary, homeware, technology and foodstuffs, Selfridges has the most comprehensive selection of desirable brands and products anywhere in the Midlands. Selfridges take off - VIVA - Brand Agency. Yellow is the new black; and it has been for a number of years now. 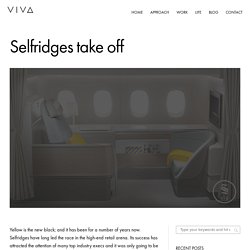 Selfridges have long led the race in the high-end retail arena. Its success has attracted the attention of many top industry execs and it was only going to be a matter of time until it expanded its offering further. Arguably the secret of Selfridges’ success to date is in the power of their merchandising. And what do you suppose the buzzword for many of the world’s leading airlines is right now? That’s right – merchandising. If you’re an airline, here are five reasons why you should take note: The Selfridges story. Harry Gordon Selfridge – always called Harry by his family and friends – was born on 11 January 1856 at Ripon, Wisconsin, in the US. 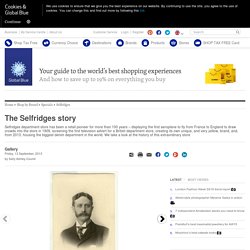 After a successful 24 years working in various department stores in Chicago, having earned the nickname Mile-a-Minute Harry for his enthusiasm and relentless innovation, Selfridge left America to establish his own retail empire in the richest city in the world, London. In June 1906 Selfridge & Co was established. Work began on demolishing properties along the ‘dead end’ of Oxford Street, where Selfridge planned a magnificent neo-classical building. The partnership between Selfridge and his financial associates collapsed in 1907, and for a while it seemed there would be no store. What the world thinks. Miss Selfridge / Arcadia Group. With its sharp sense of style, independent spirit and a fashion heritage par excellence, Miss Selfridge really is a child of the '60s. 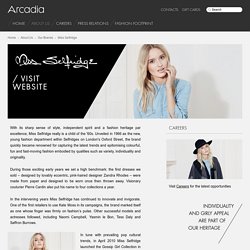 Unveiled in 1966 as the new, young fashion department within Selfridges on London's Oxford Street, the brand quickly became renowned for capturing the latest trends and epitomising colourful, fun and fast-moving fashion embodied by qualities such as variety, individuality and originality. During those exciting early years we set a high benchmark: the first dresses we sold – designed by lovably eccentric, pink-haired designer Zandra Rhodes – were made from paper and designed to be worn once then thrown away. Visionary couturier Pierre Cardin also put his name to four collections a year. Androgynous brand KTZ stocked in Selfridges' unisex floors. Selfridges - Luxury Branding. Brand Positioning and Identity In 1996, Selfridges was embracing major change. For the first time in history, the company was opening a new site in Manchester and radically transforming its identity from a home furnishing store to a fashion-led brand for a younger market.

The challenge was to evolve the brand so that it could exist independently from its famous London site and be relevant to fashion. Econsultancy. Selfridges has just relaunched its website, part of a £40m investment over the next five years, which aims to future-proof the business. We paid a visit to Selfridges' London offices for a preview of the new site, and a chat with the company's Multichannel Director Simon Forster. Here, he explains the thinking behind the redesign, the growth of mobile shoppers, and the challenges of presenting a luxury user experience. Could you tell us about visitor and sales volumes for Selfridges.com?

At the moment we have an average of around 1m visitors per week, well over half which are on mobile devices. This is an area that is accelerating rapidly, as mobile represented 24% of traffic this time last year. 25% of these visits are from users on mobile phones. In fact, it will probably happen at some point this year. Are you now focusing more on these mobile users? I think the days of mobile users using sites only for research has gone. The new site is designed to be touched, that is very important. Selfridges: The making of a British icon. Selfridges Birmingham turns green for St Patrick's Day. Selfridge's Work It Campaign Lunchtime Makeovers. To quote the late, great Harry Gordon Selfridge, there's no fun like work. 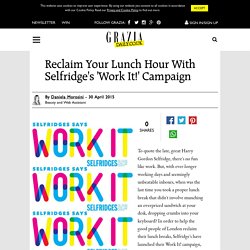 But, with ever-longer working days and seemingly unbeatable inboxes, when was the last time you took a proper lunch break that didn't involve munching an overpriced sandwich at your desk, dropping crumbs into your keyboard? Hot!Mess founder Tayla-Blue launches collection in Selfridges Birmingham. You know how it goes. 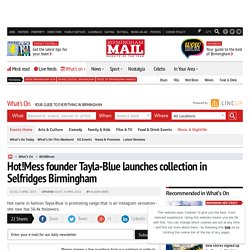 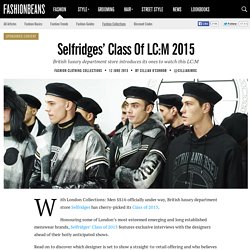 Honouring some of London’s most esteemed emerging and long established menswear brands, Selfridges’ Class of 2015 features exclusive interviews with the designers ahead of their hotly anticipated shows. Read on to discover which designer is set to show a straight-to-retail offering and who believes women designing menswear makes perfect sense. The King Of British Menswear: Paul Smith. The 1960s dress that inspired iconic Selfridges design. It is one of our most distinctive landmarks, has won a host of architectural awards and helped catapult Birmingham higher in the ranking of the coolest cities to shop in. 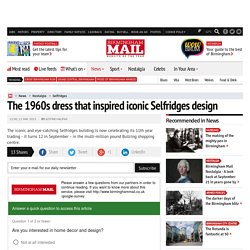 The iconic and eye-catching Selfridges building is now celebrating its 11th year trading – it turns 12 in September – in the multi-million pound Bullring shopping centre. It has proved to be the architectural equivalent of Marmite – but love it, or loathe it, it certainly got people talking about Brum again. Selfridges Birmingham to showcase work of fashion and interior design stars of the future. Burberry, Dior, Michael Kors - Selfridges has them all and more. 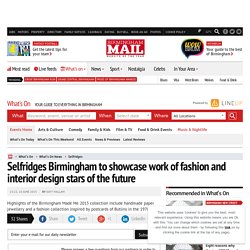 But this week the iconic Bullring store is championing the best homegrown talent Birmingham has to offer. Which, as we know, is A LOT. BAPE: A Shop In Shop. In bloom: Apple stages a floral takeover of Selfridges' windows. When we first road-tested the Apple Watch in Milan earlier this year, it seemed the brand had - almost impossibly - outdone itself. 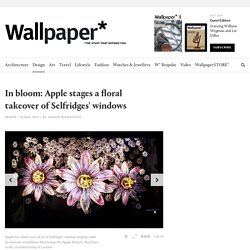 But then again, Apple products seem to take a life of their own, growing in extraordinary and unexpected ways with each iteration. From today, Apple devotees in London will see this ethos realised to full effect, where the tech giant has taken over all 24 of Selfridges' iconic windows with a blossoming floral installation that brings the Apple Watch to life. Adopting the smartwatch's UI design, the installation is made from flowers ranging from 200mm to 1.8m in height, all featuring a unique configuration of the Apple Watch – including Apple Watch Sport, Apple Watch and Apple Watch Edition.

Selfridges unveils its agender fashion campaign at Oxford Street store. From Cara Delevingne rocking a suit on the red carpet to Brad and Angelina wearing matching androgynous outfits to the BAFTAS, fashion icons have never been scared to experiment with gender. And one major retailing is jumping on the bandwagon by blurring the lines between men's and womenswear. Selfridges has launched a 'gender-neutral' fashion campaign encouraging consumers to buy clothes without being restricted to men's or women's fashions. Scroll down for video. Missguided launches first UK physical presence with Selfridges concession. Etsy to launch in Selfridges as it moves into UK bricks-and-mortar space.

“With our latest initiative we aim to drive awareness of the serious threat plastic poses to our oceans, in particular single use plastic water bottles. Greenpeace UK executive director John Sauven said: Y-3 from Selfridges X Complex has arrived. In the second installment of the ongoing Selfridges X Complex partnership, we're shining a spotlight on Y-3, the ground-breaking label that was the first instance of fashion teaming up with sportswear, in Yohji Yamamoto and adidas. When the label launched 13 years ago, it proved to be a precursor of what was to come, with the world of fashion and sportswear moving closer and closer until they reached where they sit now, which is firmly within the same space.

The central London department store has transformed 3,000 square feet of its fourth floor into a winter wonderland filled with festive decorations. Even Father Christmas was present, to welcome shoppers through the doors 143 shopping days before the big day. Geraldine James, Selfridges’ Christmas home and decorations buyer, said: “Despite the summer weather, we’re in full festive mode here at Selfridges. Apple Watch takes over Selfridges windows, filling displays with huge flowers - Features - Gadgets and Tech - The Independent.