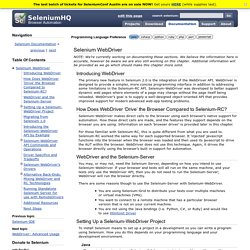 We believe the information here is accurate, however be aware we are also still working on this chapter. Additional information will be provided as we go which should make this chapter more solid. Introducing WebDriver The primary new feature in Selenium 2.0 is the integration of the WebDriver API. Running Selenium Headless. Our dog food Pulse server, which spends all day building itself, is a headless box. 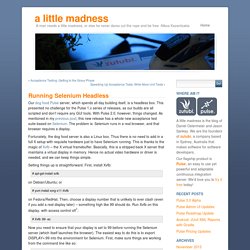 This presented no challenge for the Pulse 1.x series of releases, as our builds are all scripted and don’t require any GUI tools. With Pulse 2.0, however, things changed. As mentioned in my previous post, this new release has a whole new acceptance test suite based on Selenium. The problem is: Selenium runs in a real browser, and that browser requires a display. Fortunately, the dog food server is also a Linux box. Setting things up is straightforward. Agile Testing: Running Selenium WebDriver tests using Firefox headless mode on Ubuntu. Selenium IDE is a very good tool for recording and troubleshooting Selenium tests, but you are limited to clicking around in a GUI. 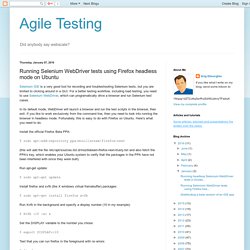 For a better testing workflow, including load testing, you need to use Selenium WebDriver, which can programatically drive a browser and run Selenium test cases. In its default mode, WebDriver will launch a browser and run the test scripts in the browser, then exit. If you like to work exclusively from the command line, then you need to look into running the browser in headless mode. Fortunately, this is easy to do with Firefox on Ubuntu. Here’s what you need to do: Install the official Firefox Beta PPA: $ sudo apt-add-repository ppa:mozillateam/firefox-next (this will add the file /etc/apt/sources.list.d/mozillateam-firefox-next-trusty.list and also fetch the PPA’s key, which enables your Ubuntu system to verify that the packages in the PPA have not been interfered with since they were built)

Java - How to get screenshot from RemoteWebDriver server instead of local FirefoxDriver? Run Firefox/Chrome in XVFB. Selenium, Java. Running Selenium WebDriver tests using Firefox headless mode on Ubuntu. Unit testing - How to get selenium to wait for ajax response? Getting started - ChromeDriver - WebDriver for Chrome. This page documents how to start using ChromeDriver for testing your website on desktop (Windows/Mac/Linux). 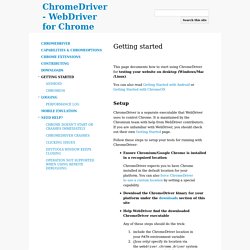 You can also read Getting Started with Android or Getting Started with ChromeOS Setup ChromeDriver is a separate executable that WebDriver uses to control Chrome. It is maintained by the Chromium team with help from WebDriver contributors. If you are unfamiliar with WebDriver, you should check out their own Getting Started page. Getting started - ChromeDriver - WebDriver for Chrome. It's all abt Tamil: Headless Chrome/Firefox Selenium Java in Amazon EC2. Setting up chrome/firefox in linux based x86_64 EC2 instance In this post we'll see how to setup chrome/firefox in EC2 instance. 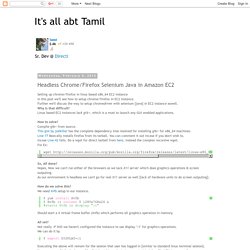 Further we'll discuss the way to setup chromedriver with selenium [java] in EC2 instance aswell.Why is that difficult? Linux based EC2 instances lack gtk+, which is a must to launch any GUI enabled applications. How to solve? Compile gtk+ from source. This gist by joekiller has the complete dependency tree resolved for installing gtk+ for x86_64 machines.Line 77 Basically installs firefox from its tarball. So, All done? How do we solve this? Should start a X virtual frame buffer (Xvfb) which performs all graphics operation in memory. All set? Executing the above will remain for the session that user has logged in [similar to standard linux terminal session]. Problem 2: Setting up chromedriver[java] isn't a tough task incase you landed in here first :D. Installing Selenium and ChromeDriver on Ubuntu - Christopher Su. I recently got Selenium, Google Chrome, and ChromeDriver installed and working on a DigitalOcean instance running 64-bit Ubuntu 14.04. 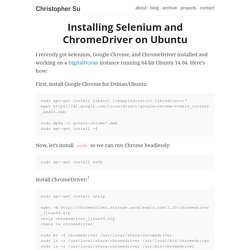 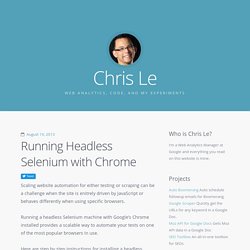 Running a headless Selenium machine with Google’s Chrome installed provides a scalable way to automate your tests on one of the most popular browsers in use. Here are step by step instructions for installing a headless Selenium server with Chrome and Vagrant. Side note: Why use Selenium instead of PhantomJS? Spike Goals Get up and running quicklyRun a sample script that demos it worksUse JavaScript only (via NodeJS) Prerequisites The code you write locally should work when deployed at scale in production. 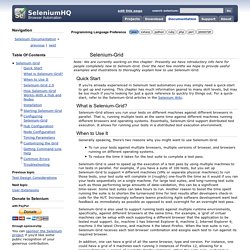 Presently we have introductory info here for people completely new to Selnium-Grid. Over the next few months we hope to provide useful examples and illustrations to thoroughly explain how to use Selenium-Grid. Quick Start. Getting started - ChromeDriver - WebDriver for Chrome. Grid2 · SeleniumHQ/selenium Wiki. Selenium grid for selenium1 and webdriver Introduction Grid allows you to : scale by distributing tests on several machines ( parallel execution )manage multiple environments from a central point, making it easy to run the tests against a vast combination of browsers / OS.minimize the maintenance time for the grid by allowing you to implement custom hooks to leverage virtual infrastructure for instance. 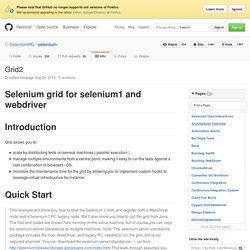 Quick Start This example will show you how to start the Selenium 2 Hub, and register both a WebDriver node and a Selenium 1 RC legacy node. Step 1: Start the hub The Hub is the central point that will receive all the test request and distribute them the the right nodes. Open a command prompt and navigate to the directory where you copied the selenium-server-standalone file.