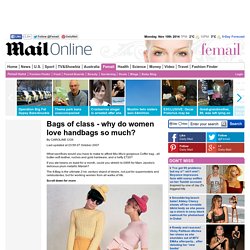 For and Against: Celebrity Marketing in Luxury Communications - Luxury Society - For and Against. TAG Heuer reveals its new Muse Cameron Diaz and its new LINK Lady series Luxury Society investigates the relationship between luxury brands and celebrities, and the merits of such partnerships in the modern marketing mix. 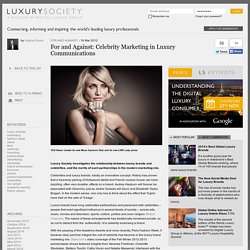 Celebrities and luxury brands, hardly an innovative concept. History has proven that a heavenly pairing of Hollywood starlet and French couture house can have dazzling, often very durable, effects on a brand. Audrey Hepburn will forever be associated with Givenchy, just as Jackie Onassis will Gucci and Elizabeth Taylor, Bulgari. In the modern sense, one only has to think about the effect that ‘It girls’ have had on the sale of ‘It bags’. PurseBlog Asks: Do Celebrities Influence Your Opinions on Bags? A quick look at the comments on any of our celebrity posts make at least one thing clear: you guys are pretty savvy to the not-so-transparent ways that brands try to market things to you via their famous friends. 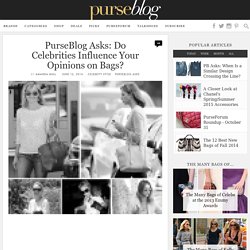 And while no celebrity gets everything for free (seriously, we see most of them shopping all the time), the art of the celebrity placement, as it’s called, is alive and well. What we want to know, though, is if the tactic affects your shopping habits. I’ve been thinking about this topic ever since Fashionista ran a piece on the tactic’s evolving use a couple of weeks ago, but the fact that the Louis Vuitton Soft Lockit keeps popping up on the arms of A-List celebrities is what really started my own examination of how these tacit celebrity endorsements affect my perceptions.

Since the bag first turned up on Karlie Kloss at the tail end of April, we’ve published three other posts on celebrities carrying the bag, plus an introduction to the bag itself. Introduction-to-the-luxury-pro-4feb287d6d51b.pdf. Welcome to Forbes. 6069_acorn_userguide.pdf. Designer Brands: Why Are We So Obsessed? During my freshman year of college I was amazed at how many girls wore designer denim to class and toted their books around in enormous Coach bags every day. 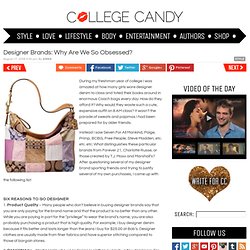 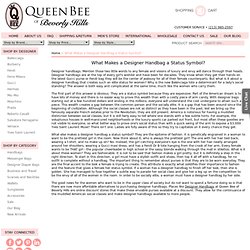 Mention those two little words to any female and visions of luxury and envy will dance through their heads. Designer handbags are at the top of every girl's wishlist and have been for decades. They know when they get their hands on the latest Gucci purse or Fendi bag they will be the center of jealousy for all of their female counterparts. But what is it about a designer handbag that creates such an elite status for women? Why is the new Balenciaga tote a determinant for a lady's social standing? World Handbag Report 2012 Media Kit. Wli_handbags.pdf. Fashion on Television: Identity and Celebrity Culture - Helen Warner. Fashion on Television provides a comprehensive critical examination of the intersection between fashion, television and celebrity culture. 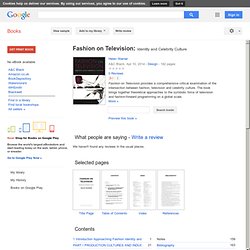 The book brings together theoretical approaches to the symbolic force of television and fashion-forward programming on a global scale. $ELLEBRITY: A Consideration of the Celebrity as Purveyor of Design in the Fashion World. I Table of ContentsI. 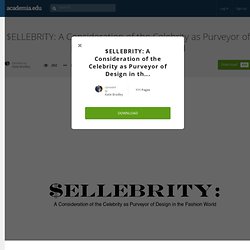 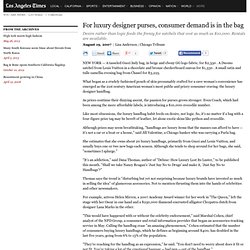 A Duomo satchel from Louis Vuitton in a chocolate and bronze checkerboard canvas for $1,330 . A small satin and tulle camellia evening bag from Chanel for $3,225. What began as a crudely fashioned pouch of skin presumably crafted for a cave woman's convenience has emerged as the 21st century American woman's most public and pricey consumer craving: the luxury designer handbag. As prices continue their dizzying ascent, the passion for purses grows stronger. Even Coach, which had been among the more affordable labels, is introducing a $10,000 crocodile number. Like most obsessions, the luxury handbag habit feeds on desire, not logic. Luxury Brands & Celebrities: An Enduring Branding Romance. Celebrity endorsement of luxury fashion is hardly a new phenomenon, as it has been around for several centuries. 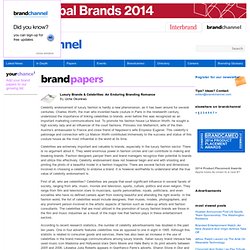 Charles Worth, the man who invented haute couture in Paris in the nineteenth century, understood the importance of linking celebrities to brands, even before this was recognized as an important marketing communications tool. To promote his fashion house La Maison Worth, he sought a high society lady and an influencer of the court fashions, Princess Von Metternich, wife of the then Austria’s ambassador to France and close friend of Napoleon’s wife Empress Eugenie. This celebrity’s patronage and connection with La Maison Worth contributed immensely to the success and status of this couture house as the most influential in the world at its time. Celebrities are extremely important and valuable to brands, especially in the luxury fashion sector. 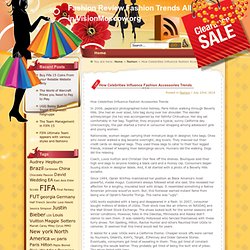 She had an over sized, tote bag slung over her shoulder. The slender actress/singer (ha ha) was accompanied by her faithful Chihuahua. Her dog sat comfortably in her bag. Together, they enjoyed a typical, sunny California day. Nationwide, women began carrying their miniature dogs in designer, tote bags. Ch-cb-en-global-powers-of-luxury-goods-2014.pdf. China world's biggest luxury consumer - Business - Chinadaily.com.cn. L'Oréal Buys Magic, Cath Kidston Expands, Adidas' Local Strategy, Luxury Handbags as Collateral - The Business of Fashion. “L’Oréal To Buy Magic Holdings International For $843 Million” (Bloomberg) “The acquisition gives L’Oréal the top-selling facial mask brand in China, where beauty and personal-care product sales will expand 8 percent to $34 billion this year, according to Euromonitor estimates. Magic has 288 distributors in 32 provinces and regions in China, according to its website.

‘This should allow L’Oréal to accelerate the growth of its own brands in China through a greater distribution reach,’ said Chas Manso de Zuniga, an analyst at Société Générale SA.” “Cath Kidston Takes On Its Floral Patterns To China” (Financial Times) “Cath Kidston, the floral-focused British retailer, has more stores abroad than in the UK after it opened outlets in China. “Adidas Gains On Nike In China By Balancing Performance With Fashion” (Ad Age) “The company is gaining on Nike’s top spot, reporting 6% revenue growth in Greater China in the first quarter of 2013, following 15% growth there in 2012.

Honors Thesis. The rise of discreet luxury and a new consumer elite. There was a time when luxury was all about displaying elitism through logos and labels. Now, however, there is a shift toward consumers finding subtler ways of "showing off". Moreover, with only one in six saying they like the expensive items that they buy to feature prominent brand names, perhaps the age of logo fatigue is upon us. It became clear that it was time to sit up and take notice when that bastion of the signature motif, Louis Vuitton, ran an ad campaign in China – one of the territories frequently cited as still worshipping at the altar of upmarket bling – that carried no branding at all.

The ad featured a photograph of Chinese actress Fan Bingbing drinking tea, with a pastel-coloured, logo-free LV bag at her side; the image ­contained no brand information. Experimentation - Social Influence. Social influence is a part of our everyday life but we rarely notice it. Hand Luggage & Leather Goods 2013. INTO THE FASHION: Cultural Influences On Trend Forecasting. For everyone who works in the fashion business it is important to be able to recognize and to foresee social and cultural movements, in order to understand the fashion environment and to be able to operate in the direction in which the fashion industry will move.

Being able to anticipate what will happen in the next future is what puts a fashion designer, a retailer or a fashion buyer in the position to make better decisions in their work. And in this, fashion is not at all an isolated industry but is connected to the rest of our life. Fashion reaches beyond clothing and into the way we choose to live our lives. Lifestyle is how we communicate, how we travel, how we decorate our homes, how we eat and how we dress. Lifestyle and trends are strongly influenced by social-cultural changes, such as modernization, technological innovation and also by artistic movements.